HOME / WORLD / Explain It to Me, Please 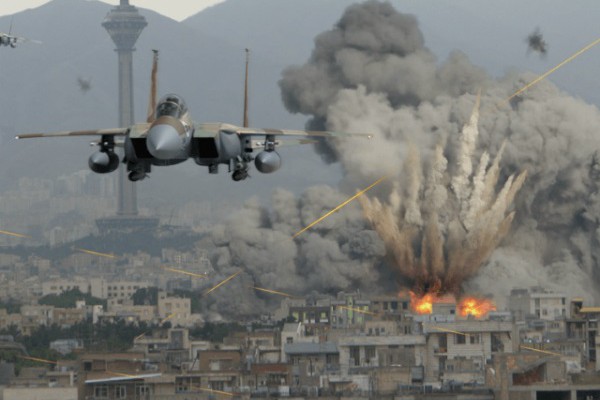 If you want a war with Iran, Russia, China and Venezuela tell me why and how it would benefit Americans

So Honest Joe Biden is now going to give another $1.2 billion to the Ukrainians on top of the sixty or so billion that is already in the pipeline, but who’s counting, particularly as Congress refused to approve having an inspector general to monitor whose pockets will be lined. The money will be printed up without any collateral or “borrowed” and the American taxpayer will somehow have to bear the burden of this latest folly that is ipso facto driving much of the world into recession. And it will no doubt be blamed on Vladimir Putin, a process that is already well under way from president mumbles. But you have to wonder why no one has told Joe that the whole exercise in pushing much of the world towards a catastrophic war is a fool’s errand. But then again, the clowns that the president has surrounded himself with might not be very big on speaking the truth even if they know what that means.
Having followed the Ukraine problem since the United States and its poodles refused to negotiate seriously with Vladimir Putin in the real world, I have had to wonder what is wrong with Washington. We have had the ignorant and impulsive Donald Trump supported by a cast of characters that included the mentally unstable Mike Pompeo and John Bolton followed by Biden with the usual bunch of Democratic Party rejects. By that I mean deep thinkers about social issues who would not be able to run a hot dog stand if that were what they were forced to do to make a living. But they are real good at shouting “freedom” and “democracy” whenever questioned concerning their motives.

Indeed, opinion polls suggest that there is a great deal of unrest among middle and working class Americans who see a reversion to Jimmy Carter era financial instability, at that time caused by the oil embargo. Well, there is a new energy embargo in place brought about by the Biden Administration’s desire to wage proxy war to “weaken” Russia. Analysts predict that the costs for all forms of energy will double in the next several months and surging energy costs will impact the prices of other essentials, including food. Given all that, the fundamental issue plaguing both Democrats and Republicans is their inability to actually explain to the American people why the country’s foreign and national security policy always seems to be on the boil, searching for enemies and also creating them when they do not exist, even when the results are damaging to the interests of actual Americans.

That a serious discussion of why the United States needs to have a military that costs as much as the next nine nations in that ranking combined is long overdue and rarely addressed outside the alternative media. The 2023 military budget has been increased from this year’s, totaling $858 billion, and, if one includes the constantly growing largesse to Ukraine, approaching a hitherto unimaginable trillion dollars. The military budget has become a major driver of the country’s unsustainable deficits. The deaths of millions of people directly and indirectly in the wars started in 9/11 aside, the wars of choice have cost an estimated $8 trillion.

The Constitution of the United States makes it clear that a national army was only acceptable to the Founders when it was dedicated to defending the country from foreign threats. Do Americans really believe that bearing the burden of having something like 1,000 military bases scattered around the world really makes them safer? The recent rapid collapse of the security situation in Afghanistan suggests that having such bases turns soldiers and bureaucrats into potential hostages and is therefore a liability. One might also suggest that the insecurity currently prevailing in the country can in large part be attributed to the government’s depiction of numerous “threats” in order to justify both the commitment and the expense.

So where does all the money go? And what are the threats? Starting with a war that the United States is de facto though not de jure involved in, Ukraine, what was the Russian threat that demanded Washington’s intervention? Well, if one discards the nonsense of a “rules based international order” or a plucky little democracy Ukraine fighting valiantly against the Russian bear, Moscow did not threaten the United States in any way before the missiles starting flying. Putin sought to negotiate a settlement with Ukraine based on a number of perceived existential Russian national security interests, all of which were negotiable, but the US and its friends were uninterested in compromise while also plying the corrupt Zelensky regime with weapons, money and political support. The final result is a conflict that will likely only end when the last Ukrainian is dead and it includes the possibility that a misstep by the United States and Russia could lead to a nuclear holocaust. To put it succinctly, what is going on does not enhance US national security, nor does it benefit Americans economically.

And then there is China. Biden let the cat out of the bag on his recent trip to the Far East. He stated that the United States would defend Taiwan if China were to attempt to annex it. In saying that, Biden demonstrated that he does not understand the strategic ambiguity that the US and the Chinese have preferred over the past fifty years as an alternative to war. The White House for its part quickly issued a correction to the Biden statement, explaining that it was not true that Washington is obligated to defend Taiwan. Some uber hawkish congressmen have apparently found the Biden gaffe appealing and are promoting a firm US commitment to defend Taiwan, coupled with a $4.5 billion military assistance package, of course.

At the same time, some officials in the Pentagon and the usual gaggle of congressmen also keep warning about the over the horizon threat from China as an excuse to boost defense spending. Most recently, there was alarm over Chinese participation in a meeting in May in Fiji to consider a China-Pacific Islands free trade pact! In reality, the only serious current threat from China is as an economic competitor. A trade war with China would be a disaster for the US economy, which is heavily dependent on Chinese manufactured goods, but Beijing, with its relatively small military budget, does not pose a physical threat to the United States.

And let’s not ignore Iran which has been hammered by economic sanctions and also through the covert killing of its officials and scientists. The US/Israeli war on Iran has also spilled over into neighboring Syria, where Washington actually has troops on the ground occupying the country’s oil producing region and stealing the oil. Iran’s possible expansion of its nuclear program to produce a weapon was effectively impeded through monitoring connected to a multilateral 2015 agreement called the Joint Comprehensive Plan of Action (JCPOA) but Donald Trump, unwisely and acting against actual American interests, withdrew from it. Joe Biden has been warned by Israel not to re-enter the agreement, so he will no doubt comply with Prime Minister Naftali Bennett’s determination to have Washington continue to apply “extreme pressure” on the Islamic Republic. Does either Iran or its ally Syria threaten the United States in any way? No. Their crime is that they are in the same neighborhood as the Jewish state, which finds the US government easy to manipulate into acting against its own interests.

Finally, in America’s own hemisphere there is Venezuela, which has been elevated to the status of Washington’s most hated nation in the region. Venezuelans have been subjected to increasingly punitive US sanctions, including some new ones just last week, which hurt the poorer citizens disproportionately but have not brought about regime change. Why the animosity? Because the country’s leader Nicolas Maduro is still in power in spite of a US assertion that the country’s opposition leader Juan Guaido should rightfully and legitimately be in charge after a possibly fraudulent election in 2018. The latest therapy applied by the United States on Caracas consisted of blocking the country as well as Nicaragua and Cuba from participating in the recent meeting of the Ninth Summit of the Americas which was held in Los Angeles. A State Department spokesman explained that the move was due to the three countries “lacking democratic governances.” Mexican President Lopez Obrador protested against the move and removed himself from his country’s delegation, saying “There can’t be a Summit of the Americas if not all countries of the American continent are taking part.” The despicable US Senator Robert Menendez of the Senate Foreign Relations Committee then felt compelled to add his two cents, criticizing the Mexican president and warning that his “decision to stand with dictators and despots” would hurt US-Mexico relations. So where was the threat from Venezuela (and Cuba and Nicaragua) and why is the US involved at all? Beats me.

What all of this means is that there is absolutely no standard of genuine national security that motivates the US’s completely illegal aggression in many parts of the world. What occurs may be linked to a desire to dominate or a madness sometimes described as “exceptionalism” and/or “leadership of the free world,” neither of which has anything to do with actual security. And the American people are paying the price both in terms of decline in standards of living due to the upheaval created in Ukraine and elsewhere as well as a completely understandable loss of faith in the US system of government. By all means, let us shrink the US military until it is responsive to actual identifiable threats. Let’s elect a president who will follow the sage advice of President John Quincy Adams, who declared that “Americans should not go abroad to slay dragons they do not understand in the name of spreading democracy.” At this point, one can only imagine an America that is at peace with itself and with what it represents while also being considered a friend to the rest of the world.

0 thoughts on “Explain It to Me, Please”