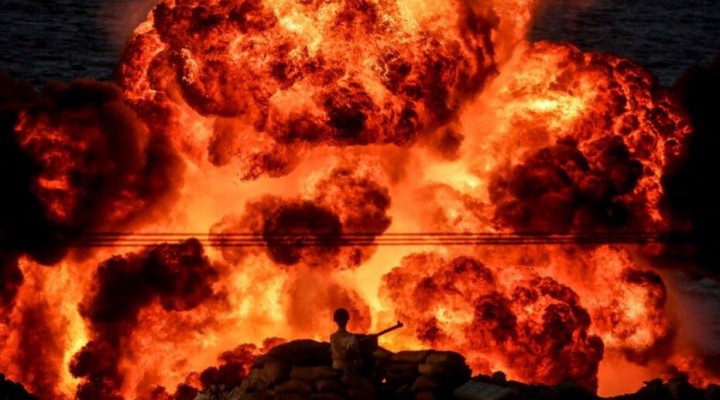 Today, Iran is demonised as an intolerable threat to western global Order. But it was not always thus

The Structural scaffolding was first put into place in the early 1990s. But that structure was erected on false premises and lazy misconceptions. Its flaws, however, were papered over for nearly two decades; but now changes to the overall regional paradigm mean that the scaffolding is reversing itself: it no longer contains latent conflicts, but is funnelling us headlong toward them.

To understand the double helix at the centre of the Middle East, pulling us into its swirling sink-hole, we must first address the structure of Israel’s relationship with Iran and the Palestinians, and see how that has come to lock us into dynamics which, as matters stand, threaten to break the fetters holding containment in place.

Today, Iran is demonised as an intolerable threat to western global Order. But it was not always thus.

“We had very deep relations with Iran, cutting deep into the fabric of the two peoples”, said a high-ranking official at the Israeli foreign ministry just after the Iranian Revolution in 1979. Israeli (and U.S.) officials then saw it as sheer madness to view Iran as anything other than a natural interlocutor.

That sense of close affinity persisted well beyond the Iranian Revolution. It was not just remorse for the late Shah. Sentiments of imagined affinity prompted even hard-headed Israeli politicians of the Right – including prime minister Menachem Begin – to reach out to the new Revolutionary leadership: Ayatollah Khomeini’s pragmatism in foreign policy was being misread by Israelis as evidence that the revolution had been an aberration.

Ben-Gurion, Israel’s first prime minister, did not see Israel as part of the Middle East, but as part of Europe. From 1952, Ben-Gurion repeated that although Israelis were sitting in the Middle East, this was a geographical accident, for they were a European people. “We have no connection with the Arabs,” he said. “Our regime, our culture, our relations, is not the fruit of this region. There is no political affinity between us, or international solidarity”.

Resulting from this rather orientalist optic, Ben Gurion in the first instance looked to the U.S. as partner – but, rebuffed by Eisenhower, Ben-Gurion evolved the concept of the “Alliance of the Periphery” which together with a subsequent alliance of minorities, aimed to balance the vicinity of hostile Arab states by forming alliances with Iran, Turkey and Ethiopia. It was an attempt to strengthen Israeli deterrence, reduce Israel’s isolation, and add to its appeal as an ‘asset’ to the U.S.

Here is to be found the first misperception to the scaffolding story: Viewed by Israel, (a perspective shared by the U.S.), the Iranian Revolution was no more than a discontinuity in the western narrative of a historical progression from backwardness to western-style secular modernity. It was an aberration, a kick against modernity that would be self-corrected over time. The ideological basis to the revolution, therefore, was seen as hollow. And whenever Iran’s revolutionary leadership showed any signs of pragmatism in its foreign policy, it reinforced the U.S. and Israeli view that this would lead eventually to an alliance with Israel.

It was this latter conviction which underpinned Israeli and U.S. thinking during the 1980s. Yossi Alpher, a former Mossad official, noted that the periphery doctrine was so “thoroughly ingrained” in the Israeli mindset that it had become “instinctive”. It was out of this conviction that Israel inveigled the U.S. to sell weapons to Iran in the mid-1980s – a prelude to the Iran-Contra scandal.

Why did this misconception occur? Probably it owed to a style of secular western rationality, which, ingrained with its materialist bias, perceived no ideology to the Revolution in the contemporary post-modern sense of a blueprint of concrete objectives. Consequently, it overlooked in Iran the thread of an ancient philosophical ‘way of being’ – not ideology – that simply did not exist in the Sunni sphere – where Ibn Taymiyyah had ‘closed the gates’ to philosophy, already in the thirteenth century. Did this then mean that it was a threat?

Whilst it was very much the case that the western culture of consumer society repelled Iranian leaders, they had no problem with modernity, or technology as such. The revolution was at no point conceived with an aggressive regional ambition. It did not threaten Israel, nor the U.S., in conventional military terms. It was about esoteric transformation, which (admittedly) was a focus not easily accessible to many in the West.

In any case, events intervened in the years 1990-92 to turn the paradigm on its head. One was the implosion of the Soviet Union which saw Russia ‘out’ from the region; and the second was the first Gulf War which saw Iraq removed as a threat to Israel.

Paradoxically, Israel – instead of being reassured – was afeared. Iran and Israel now were the pre-eminent rival regional powers. What if the U.S. were to side with Iran, rather than with Israel, in the war’s wake? Well, Yitzhak Rabin’s Labour Party, elected in 1992, dramatically and radically decided to turn everything upside-down, to ensure that did not happen.

The Rabin shift placed Israel and Iran on opposite sides in the new equation, and the change was as intense as it was unexpected: “Iran has to be identified as Enemy No 1,” Yossi Alpher, at the time an adviser to Rabin, told the New York Times. And Shimon Peres, the other most senior Labour figure, warned the international community in an interview in 1993, that Iran would be armed with a nuclear bomb by 1999.

In other words, Iran was made the Manichean enemy of the West out of choice – as a political tactic – rather than because of any objective evidence of enmity. The demonisation of Iran served as a lever with which to divert the U.S. Jewish Lobby: The Lobby would be switched to a new focus on the existential threat from Iran, rather than to turn its’ anger on Israel’s leaders for betraying Jabotinsky, by supping with the enemy – Arafat and the Arabs.

It was Jabotinsky who had argued in his seminal Iron Wall article in 1923 that there could – and should – never be agreement with the Arabs. Yet here was Rabin casting aside the Ben-Gurion’s Alliance of the Periphery, to embrace Yasir Arafat and a Palestinian movement that had emerged crippled by the defeat of Iraq in the Gulf War.

The inversion of the earlier paradigm was completed by the U.S.’ contemptuous, multiple rebuffs to Iran despite the latter’s cooperation with Washington during the war in Afghanistan (2002) and Iraq (2003), and in its audacious attempts in 2003 to mitigate U.S. concerns about its nuclear programme.

All to no avail. The U.S. was ‘high’ on Adrenalin from its Iraq war. William Kristol, a leading U.S. neo-con, was to write in May 2003: The defeat of Iran had become the means to deliver a double blow to the Arab and Muslim psyche, as well as to the Islamist resistance. The Arabs would become docile, and the Middle East would succumb, like so many dominoes.

The structural scaffolding to today’s rising tensions then was bolted together – again on false premises.

Firstly, the Palestinians were to be ‘contained’ within the Oslo Accords. These Accords were erected on three pillars: That demography alone, in lands between the River and the Sea, meant that Israel ultimately must ‘give’ Palestinians their State (i.e. as Palestinians began outnumbering Jews); that to trigger statehood, it was required that Palestinians should firstly reassure Israel that they would attend to its security concerns (i.e. they must build the confidence with Israel that Palestinians would pose no security risk); and thirdly, that it would be Israel alone who would determine when Palestinian security efforts merited ‘gifting’ statehood.

These latter premises were based on erroneous foundations (as the last thirty years bear witness).

The next structure – the Iranian nuclear issue (ultimately addressed through the JCPOA) – was conceived in a similar approach: Iranian national sovereignty was to be limited (if it sought to exercise its rights under the NPT); that Iran would be required to prove a negative (that it was not pursuing a weapons programme) and thirdly, Israel and the U.S. would be the final arbiter on whether Iran would be trusted to have a (peaceful) nuclear power programme.

The final structural component to contemporary tensions was put into place over ten years – by Benjamin Netanyahu. He moved the centre of Israel’s centre of gravity significantly to the Right – both politically and culturally. He deliberately burnt all Israeli bridges to any political solution: either with the Palestinians, or with Iran, arguing that a military powerful Israel, allied to a supportive U.S. President and Congress, was in a position to disdain giving an inch, to either.

So … on to today’s paradigm inversion. Instead of Russia being ‘out’ from the Middle East – we have Russia ‘in’ and the U.S. (incrementally) going ‘out’; instead of an Israel paramount in the region, we have Israel isolated in the region (the only state ‘crossing the Rubicon’ to arm Ukraine to kill Russians); instead of Moscow turning a (reluctant) blind eye to Israeli air incursions into Syria, we have a Moscow that is tense with Israel, and increasingly ready to switch on its air defences’ target radar in Syria – when Israel incurses.

And … above all – instead of Israel having the ‘military edge’, we have Iran’s Red Pill deterrence.

What is the ‘Red Pill’ Deterrence? Put very bluntly, it is the conjoined aggregation of swarm drones and smart cruise-missiles surrounding Israel on all sides. The Red Pill is that if Iran is attacked by America, it will do damage to Iran, for sure, but the aftermath is ‘Israel will be no more’.

Why is it that this circle of expired scaffolds of containment are snapping shut now, with tensions spiking?

It is because a renewed JCPOA seems to be eluding Biden (in part due to a lack of Congressional support). In October 2022, the arms embargo (from the 2015 JCPOA) expires – and other clause restrictions begin to expire in 2025. And in coming months, the claim will ring out across the West that Iran has reached nuclear threshold status.

In the Palestinian sphere, all Palestinian factions have rallied to the cause of protecting al-Aqsa. If the latter is again threatened by an Israeli settler invasion, a four-front war (the Red Pill scenario again!) has been placed ‘on the table’

It is, metaphorically speaking, as Donbas is an encirclement and cauldron for the Ukrainian forces dug-in there, so the Red Pill has been devised as the cauldron for Israel.

For now, a frustrated President Putin continues to hold the ring, as regional actors ready for war. What will the Israeli leadership do? Russia, China and the SCO probably hold the only key that might unlock the situation, and allow a regional security architecture to be attempted. But for Israel going down that path would imply crossing Washington at a moment of highly wrought psyche.

The Deprogram Episode 20: The Consent Machine And The Iran-Carlson Affair

0 thoughts on “The Structural Scaffolding to Potential Mid-East War”