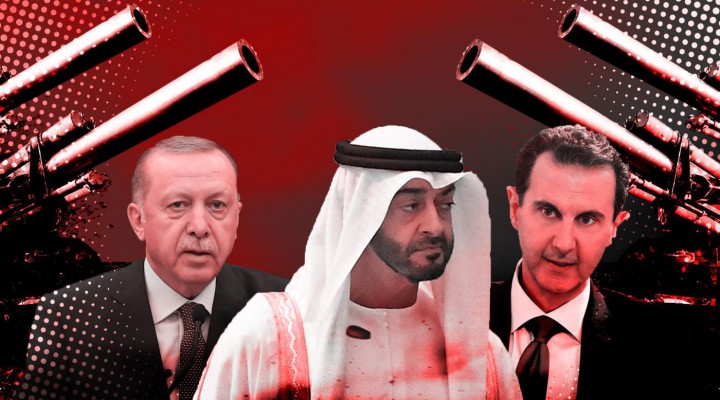 David Hearst- Abu Dhabi crown prince’s plan to tie Turkey up in Syria and distract it from the battle for Tripoli quashed by Russia, sources tell MEE

Mohammed bin Zayed (MBZ), the crown prince of Abu Dhabi, is making strenuous and persistent attempts to get Syrian President Bashar al-Assad to break a ceasefire with Turkish-backed rebels in Idlib province, Middle East Eye has been told.

In recent months, Assad’s forces backed by Russian airpower made significant gains against rebel groups in Syria’s northwestern Idlib, killing hundreds and forcing a million civilians to flee towards the Turkish border in the process.

Turkey’s military intervened in February, helping balance the conflict until violence was stopped by a Moscow-brokered truce last month.

However, MBZ both tried to prevent the ceasefire agreement between Russian President Vladimir Putin and the Turkish President Recep Tayyip Erdogan from being implemented, and has since called Assad to encourage him to re-launch his offensive, MEE has learned.

Days before the ceasefire deal was struck in a four-and-a-half-hour meeting in the Kremlin on 5 March, the crown prince sent Ali al-Shamsi, the deputy of MBZ’s brother and national security adviser Tahnoun bin Zayed, to negotiate a deal with Assad in Damascus.

According to sources familiar with MBZ’s plan, the crown prince agreed to pay Assad $3bn to reignite the offensive against Idlib, the rebels’ last redoubt, $1bn of which was due to be paid before the end of March. By the time the ceasefire was announced, $250m had already been paid up front.

The deal was negotiated in the strictest secrecy. Abu Dhabi was particularly concerned that the Americans did not get to hear of it. Washington supported the Turkish military’s efforts to confront Assad’s forces in Idlib, and had already expressed its anger with the crown prince over the release of $700m of frozen Iranian assets in October.

One high-level source told MEE: “During the Idlib clashes, al-Shamsi met Bashar and asked him not to reach an agreement with Erdogan on a ceasefire. This happened just before Erdogan’s meeting with Putin. Assad replied that he needs financial support.

“He said that Iran has stopped paying because they don’t have cash, and the Russians don’t pay anyway. So he asked for $5bn in direct support for Syria. They agreed on $3bn, $1bn paid before the end of March,” the source added.

When Assad started to rebuild his forces for a push on Turkish positions in Idlib, the Russians, who monitor military movements on the ground closely in Syria, got wind of the plan.

“Putin was furious,” the source continued.

Putin sent his defence minister, Sergei Shoygu, on an unplanned visit to Damascus to stop the Syrian government firing up the offensive again.

“The message Shoygu delivered was clear: ‘We do not want you to restart this offensive. Russia wants the ceasefire to continue.’ By then the Emiratis had already paid $250m to Damascus,” the source said.

A senior Turkish official has confirmed that the UAE made such an offer to the Syrian government. “All I can say is that the content of the report is true,” the official said.

Middle East Eye has approached the UAE authorities for comment.

Sources told Middle East Eye that MBZ persisted in his attempts to get Assad to break the ceasefire even after Shoygu’s visit. A second tranche of the initial $1bn was delivered to Damascus.

The crown prince’s motives for paying Assad to re-launch his offensive were twofold.

Firstly, Abu Dhabi wanted to tie the Turkish army up in a costly war in northwestern Syria. Turkey had just launched its fourth offensive in the country, after Syrian government troops killed 34 Turkish soldiers on 27 February, Ankara’s deadliest day in the nine-year conflict.

Secondly, MBZ wanted to stretch the resources of the Turkish army and distract Erdogan from successfully defending Tripoli from Khalifa Haftar’s forces in Libya, where Ankara recently came to the aid of the UN-recognised Government of National Accord (GNA).

As soon as Shoygu quashed Emirati attempts to break the ceasefire, MBZ became anxious that the plan would leak out to the Americans. He needed a cover story for the money he had already paid Damascus and he also wanted to continue to persuade the Syrian government to break the ceasefire. The crown prince called the president in Damascus.

“The UAE did not tell the Americans. So with all of this, the UAE became very concerned that the news will come out, especially after the fuss about the unfreezing of Iranian assets. That was the reason MBZ called Assad,” the high-level source said.

News was then released about the conversation between the two leaders. MBZ said on Twitter: “I assured him of the support of the UAE and its willingness to help the Syrian people. Humanitarian solidarity during trying times supersedes all matters, and Syria and her people will not stand alone.”

Warming relations between the United Arab Emirates and the Syrian government have been public for some time. Though the Emiratis backed the opposition when war broke out in 2011, last year it reopened its Damascus embassy, and officials have made efforts to speak about ties in increasingly effusive language.

The conversation between the crown prince and Syrian president was more than merely a continuation of this trend, however, and suspicions about the true nature of MBZ’s call arose over its timing.

MBZ wanted to give the impression that his call was in solidarity with Syria facing the coronavirus outbreak, although when they spoke Damascus was denying any major outbreak in the country.

According to sources, the crown prince’s main motive for wanting to bog the Turkish army down in Idlib was the situation in Libya.

The year-long offensive on Tripoli mounted by Haftar’s UAE-backed Libyan National Army has been stalled by Ankara’s deployment of drones, Turkish troops and Syrian mercenaries.

However for Putin, who also backs Haftar against the GNA in Tripoli, Russia’s strategic alliance with Turkey trumped all other considerations. The maintenance of a ceasefire in Idlib was more important.

MBZ was thus left with a mess on his hands that he was desperate to clear up, the source said.