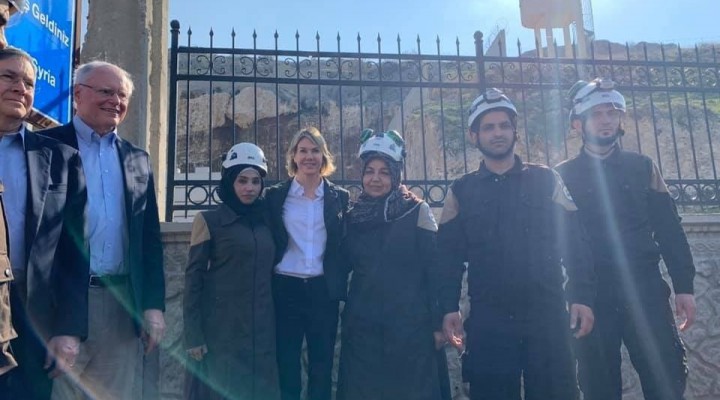 The spread of the coronavirus has meant that much of the other news about developments around the world has disappeared from the normal news cycle. The situation in Syria, which involves not only the government in Damascus but also Turkey, Russia, Iran and a remaining American force in part of the country has been proving increasingly unstable. Russian President Vladimir Putin has met face-to-face with Turkish President Recep Tayyip Erdogan to come up with a de-escalation plan that would avoid any head-to-head confrontation. An agreement was reached that included a cease fire, which most observers are describing as a surrender by Erdogan that accepted all Russian-Syrian army gains in the Idlib Province, but it remains to be seen what exactly will be sustainable. There have been subsequent reports that have include claims of the downing of two Syrian aircraft and several helicopters.

The United States for its part has been sending mixed messages to appeals from the Turks for support. Donald Trump has had an on and off again relationship with Erdogan and he has more-or-less approved the Turkish presence in the border areas and continues to endorse something like regime change in Damascus. Though it seems that at least for the moment the danger of a major armed conflict between Russia and Turkey has faded, many believe that more incidents are likely and could easily escalate.

And there is a truly dangerous connection in that Turkey and the United States are, of course, members of NATO. Under Article 5 of the NATO treaty, an attack on any one member is considered to be the same as an attack on all members and all members must respond by coming to the defense of the victim of the attack. Turkey has asked the United States for Patriot missiles to defend its troops on the ground in Syria. It has also called for NATO to enforce a no-fly zone in Idlib Province, air space that is currently controlled by Russia. Omer Celik, speaking for Erdogan’s Justice and Development Party, said that in his government’s view “The attack against Turkey is an attack against NATO. NATO should have been with Turkey, not starting today but from before these events.” Washington, for its part, has reportedly offered to provide Patriot batteries if the Turks do not deploy their recently purchased Russian built S-400 missiles. Trump has otherwise deferred to the Europeans for any direct assistance and NATO has not entertained seriously any no-fly commitment.

Under normal circumstances and in a normal world, the very idea that a member of a defensive alliance should be able to attack another country, as Turkey has done in Syria, and then demand assistance from other members of the alliance when the attacked country fights back would be a non-starter. But the problem with that kind of rational thinking is that NATO has long since ceased to be a defensive alliance. Both as an alliance and also acting through several of its member states, it has been actively involved in wars that have nothing to do with defense of Europe or of the Atlantic relationship with Washington. NATO troops are currently in Afghanistan and have also been in Iraq, Syria and Libya. Alliance members including the U.S. fought in Bosnia and Kosovo.

And there are the usual head cases on the American side also demanding action against Russia and Syria. Senator Marco Rubio of Florida tweeted that “The prospects of a direct military confrontation between Turkey & Russia in Syria are very high & increasing by the hour… [Erdogan] is on the right side here. Putin & Assad are responsible for this horrific humanitarian catastrophe.”

The American ambassador to NATO Kay Bailey Hutchison told reporters “This is a big development, and our alliance is with Turkey, it is not with Russia. We want Turkey to understand that we are the ones that they’ve been allied with.”

The United States has further complicated the game through a recent visit made by the entourages of two senior U.S. officials who visited Syria’s Idlib on March 3rd and pledged $108 million aid for Syrian civilians, hours after Turkey downed its second Syrian warplane in the province. Who exactly would receive the money and how it would be distributed was, inevitably, not immediately clear.

The two diplomats slipped over the border from Turkey with the connivance of Ankara and several Syrian “resistance” groups. They conspicuously met with the so-called White Helmets, a group that claims to be involved in nonpartisan humanitarian rescue missions but which really is affiliated with terrorists, most notably the Hayat Tahrir al-Sham (HTS), which is affiliated with al-Qaeda. HTS is the principal terrorist group operating in Idlib.

The group of American diplomats was headed by U.S. representative to the United Nations Kelly Craft, along with U.S. Special Envoy for Syria James Jeffrey. It was the first visit by American diplomats to Idlib. Craft announced that the aid package was for “the people of Syria in response to the ongoing crisis caused by Assad regime, Russian, and Iranian forces”. Jeffrey struck a more directly belligerent pose, saying that Washington would be providing ammunition in addition to the humanitarian assistance. “Turkey is a NATO ally. Much of the military uses American equipment. We will make sure that equipment is ready and usable.”

U.S. policy in Syria serves no American interest, but both Craft and Jeffrey are well known to be in the pocket of Israel. Craft, a big time GOP donor, who, in her fifteen months spent as Ambassador to Canada was remarkable for flying back to the U.S. from Ottawa 128 times, 70 of which were to her home in Kentucky. All on the government dime even though she is an extremely wealthy woman.

Craft left Canada when she replaced the arch Zionist Nikki Haley at the U.N. She emphasized in her confirmation hearing before the Senate Foreign Relations Committee that she would “fight against anti-Israel resolutions and actions by the U.N. and its affiliated agencies.” She also “made a case for America returning to a leading role at Turtle Bay [the U.N.] as a way of protecting Israel… Without U.S. leadership, our partners and allies would be vulnerable to bad actors at the U.N. This is particularly true in the case of Israel, which is the subject of unrelenting bias and hostility in U.N. venues. The United States will never accept such bias, and if confirmed I commit to seizing every opportunity to shine a light on this conduct, call it what it is, and demand that these outrageous practices finally come to an end.”

Jeffrey is even more the zealot. His full title is as United States Special Representative for Syria Engagement and the Special Envoy for the Global Coalition to Defeat ISIL. He is, generally speaking, a hardliner politically, closely aligned with Israel and regarding Iran as a hostile destabilizing force in the Middle East region. He was between 2013 and 2018 Philip Solondz distinguished fellow at the Washington Institute for Near East Policy (WINEP), a think tank that is a spin-off of the American Israel Public Affairs Committee (AIPAC). He is currently a WINEP “Outside Author” and go-to “expert.”

Professor John Mearsheimer of the University of Chicago and Stephen Walt, academic dean at Harvard University ‘s Kennedy School of Government, describe WINEP as “part of the core” of the Israel Lobby in the U.S. They examined the group on pages 175-6 in their groundbreaking book The Israel Lobby and US Foreign Policy and concluded as follows:

“Although WINEP plays down its links to Israel and claims that it provides a ‘balanced and realistic’ perspective on Middle East issues, this is not the case. In fact, WINEP is funded and run by individuals who are deeply committed to advancing Israel’s agenda … Many of its personnel are genuine scholars or experienced former officials, but they are hardly neutral observers on most Middle East issues and there is little diversity of views within WINEP’s ranks.”

Jeffrey set the tone for his term of office shortly after being appointed by President Trump back in August 2018 when he argued that the Syrian terrorists were “. . . not terrorists, but people fighting a civil war against a brutal dictator.” Jeffrey, who must have somehow missed a lot of the head chopping and rape going on, subsequently traveled to the Middle East and stopped off in Israel to meet Prime Minister Benjamin Netanyahu. It has been suggested that Jeffrey received his marching orders during the visit.

So, Trump bleats incessantly about how he wants to withdraw the U.S. from the senseless wars that it has been drawn into but at the same time his State Department sends two Zionist hardliners to Syria on a semi-secret mission to support a policy of regime change in Damascus while also providing aid that will inevitably fall into the pockets of an al-Qaeda linked terrorist group. And ammunition will also be forthcoming for the invading Turks to shoot Syrians, Russians and Iranians. If anyone is seriously interested in what is wrong with U.S. foreign policy, the activity of Craft and Jeffrey might serve as a decent case study on how not to do it. Unless, of course, the actual objective is to screw things up and involve the United States in quarrels that it could easily avoid.

*(Top image: US Ambassador to the United Nations Kelly Craft, and James Jeffrey, the US envoy for Syria, pose with rescue workers at the Syrian commercial crossing point of Bab al-Hawa in Idlib. Credit: Walid/ Twitter)