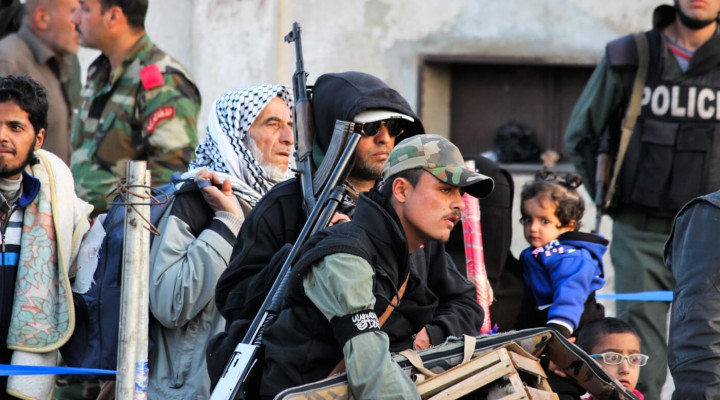 There is nothing new in the statement (text below) issued on 15 March by the four governments. To the extent however that it represents some form of exposition of policy, when normally these governments do not offer any explanation whatever for what they are doing, it is worth some textual analysis, offered below after each paragraph in italics.

The governments of France, Germany, the United Kingdom, and the United States have issued a joint statement on the ninth anniversary of the Syrian uprising.

Nine years ago today, 10s of thousands of Syrians peacefully took to the streets calling for respect for human rights and the end of government corruption. Instead of heeding the Syrian people’s legitimate demands, the Assad regime responded with a ruthless campaign of arbitrary arrests, detentions, torture, enforced disappearances, and violence. As the Syrian conflict enters its 10th year, the Assad regime’s brutal pursuit of a military victory has displaced over 11 million people – nearly half of Syria’s pre-war population – and killed more than 500,000 Syrians.

Peter Ford: Here you have it straightaway: the theory of the war with only one belligerent. No mention whatever of the Islamist extremists who with external support rapidly grabbed control of the unrest. No acknowledgement that the vast majority of the internally displaced sought refuge from the jihadis in government-held territory, no acknowledgement that well over half the supposed 500,000 were combattants, on both sides.

The Assad regime must accept the will of the Syrian people who demand and deserve to live in peace and free of shelling, chemical weapons attacks, barrel bombs, airstrikes, arbitrary detention, torture, and starvation.

PF: Our old favourites, ‘chemical weapons attacks’ (brought into question, to put it mildly) and ‘barrel bombs’, as though the jihadi mortars rained on civilian areas, especially Christian, didn’t exist, not to mention the beheadings. A complete begging of the question of how the ‘will of the people’ is to be defined and expressed, especially when the latest fatwa from the jihadi religious leaders warns back-sliders against being seduced by the twin devils of democracy and secularism .

We express our satisfaction at the liberation by the Global Coalition and the Syrian Democratic Forces of all territory once held by Daesh. However, the threat from Daesh remains, and we are resolved to continue our joint effort through the Coalition to ensure their lasting defeat. We are fighting terrorism with determination and are on the front lines of the fight.

PF: Actually the Coalition and SDF did not liberate ALL territory once held by ISIS. Tell that to the people of Palmyra, Deir Ez Zor, Yarmouk Camp, Suweida and many other areas. But of course the Four Powers have to justify the continuing illegal occupation of regions of North East Syria and the plundering of its oil resources, when ISIS is reduced to remnants which without a shadow of a doubt the Syrian government would be capable of keeping down if only the Western forces by their overstaying would stop preventing it from doing so.

But fighting terrorism cannot and must not justify massive violations of international humanitarian law or continued violence. The reckless military offensive by Assad, Russia, and Iran in Idlib only causes further suffering and an unprecedented humanitarian crisis, as medical and humanitarian infrastructures and workers, as well as civilians, are killed. In its latest bloody assault on Idlib, the Assad regime, backed by Russia and Iran, has displaced nearly one million civilians since December alone, the fastest displacement since the start of the conflict. For the latest ceasefire in northwest Syria to endure, a nationwide ceasefire must be established as called for in UN Security Council Resolution (UNSCR) 2254.

PF: Do as we say, not as we did (in Raqqa, Mosul, Fallujah, Rimadi etc). Leave the Al Qaida clones in peace to oppress and plunder the people of Idlib. The proposed solution, a nationwide ceasefire, is actually already in place given that Idlib is now the only area seeing open conflict. And what comes after the ceasefire to remove the groups which even we in a careless moment classified as terrorist? We don’t say.

Despite significant efforts by the international community, life-saving assistance is still not reaching large numbers of those in desperate need. As major donors since the beginning of the war, we will continue to support humanitarian assistance to the Syrian people, including through cross-border assistance which is a vital necessity, and we demand that all parties, particularly the Syrian regime and its allies, allow safe, unimpeded and sustained humanitarian access to all people in need in Syria. Yet, we will not consider providing or supporting any reconstruction assistance until a credible, substantive, and genuine political process is irreversibly underway. Absent such a process, reconstruction assistance for Syria would only entrench a deeply flawed and abusive government, increase corruption, reinforce the war economy and further aggravate the root causes of the conflict.

PF: Translation: open more crossings so that the jihadis who control all aid which enters can enjoy even more opportunities to replenish their war stocks. And regardless of whether economic deprivation causes even more of the immense civilian suffering we claim to abhor we will not stop blocking international reconstruction assistance while we have not installed our stooges in Damascus. Even if we know that is pure illusion we still want to cause privation out of sheer vindictiveness. We can’t let Assad, Iran and Russia enjoy their victory, and with luck more suffering will cause more unrest.

We encourage the international community to continue to provide assistance to Syria’s neighbors to share the costs of Syria’s refugee crisis. Displaced Syrians must be allowed to return voluntarily and safely to their homes, without fear of arbitrary detention, violation of rights and forced conscription. Yet, the Syrian regime continues to prevent them from doing so.

PF: Ah, ‘forced conscription’. How awful to expect young men to defend law and order when there are still a few thousand less lucky young men from decimated towns and villages in government-controlled areas left to defend them. We let jihadis return unmolested to our countries, don’t we?

We will continue to demand accountability for the atrocities committed by the Assad regime and we will continue our efforts to make sure that those who are responsible for crimes against humanity, war crimes, and other violations and abuses are identified and held accountable. The international community must come together to support the collection and release of documentation of violations and abuses of human rights and violations of international humanitarian law, including the critical work of the UN Commission of Inquiry; the UN International, Impartial, and Independent Mechanism for Syria; and the UN Secretary General’s Board of Inquiry.

PF: Exactly the incentive needed to induce the Syrian leadership to come out with its hands up.

The military solution the Syrian regime hopes to achieve, with backing from Russia and Iran, will not bring peace. We reiterate our strong support for the UN-led process in Geneva and UNSCR 2254 to bring about a peaceful and stable Syria.

PF: Of course we don’t say how this miracle is to be achieved if force of arms is to be eschewed. Peace has already been achieved in the 75% of Syria controlled by the government, and the jihadis of Idlib are totally against negotiations as well as democracy.

We – France, Germany, the United Kingdom, and the United States – demand that the Assad regime stop the ruthless killing and engage meaningfully in all aspects of UNSCR 2254, including a nationwide ceasefire, a reformed constitution, release of arbitrarily detained persons, as well as free and fair elections. A credible political process cannot be limited to attempts at convening a constitutional committee. All Syrian citizens, including citizens who are displaced persons and refugees, should be allowed to participate in free and fair elections, under UN supervision.

PF: There you have it: our solution is to rig elections. The millions of refugees are certain to vote for our stooges.

The statement is remarkable as much for its omissions as for what it does say. Not a word about secularism or protection for minorities. That the jihadi groups are totally airbrushed out of the picture, except obliquely in a prohibition on using terrorism as a justification for use of armed force, is really quite striking. There is not a word here with which Hayat Tahrir Ash Sham, the dominant jihadi group, would not concur.