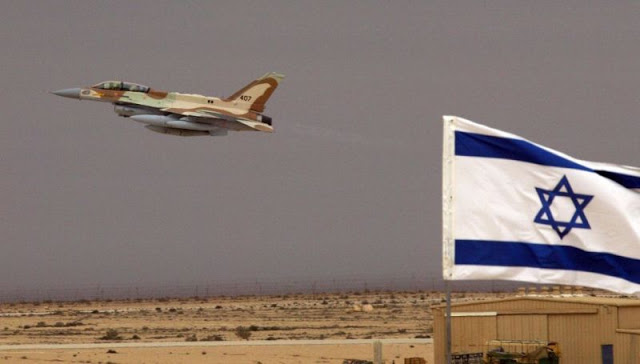 Whatever gains Turkey had made in terms of reducing its role in Washington’s proxy war and repairing ties with Syria’s allies Russia and Iran – were clearly less important to Ankara amid these recent weeks of renewed aggression than whatever Washington has either promised Anakara or threatened it with.

And precisely because Turkey’s aggression in Idlib is merely one part of the much wider proxy war Washington continues to wage against Damascus – it was predicted that others involved in the proxy war would coordinate with Turkey elsewhere in Syria.

In recent weeks Israel has continued carrying out attacks in Syrian territory.

Recent news has covered Israeli attacks on military targets in Homs – right at the edge of where Turkey’s aggression trails off.

The missiles were fired from Israeli warplanes over the Israeli-occupied Golan Heights and from Lebanese airspace, said the report, without providing details on the targets.

The attack is the latest in a string of missile strikes carried out by Israel.

Despite Israel and Turkey often posing as being at odds with one another over political, religious, or ideological issues – both nations have coordinated violence against Syria since 2011 as per US designs aimed at overthrowing the Syrian government – described in detail within US policy papers.

Ignoring the West’s ongoing propaganda surrounding the Syrian conflict and simply looking at US policy papers over the years – it is clear that not only has Washington sought to overthrow the Syrian government for decades – it has sought to do so using the same tricks.

A 1983 document – part of a deluge of declassified papers released to the public – signed by former CIA officer Graham Fuller titled, “Bringing Real Muscle to Bear Against Syria” (PDF), states (their emphasis):

In 2012 – illustrating how these plans were never taken off the table and merely updated amid the more recent 2011 US proxy war against Syria – the US corporate-funded policy think tank – the Brookings Institution – would publish a paper titled, “”Saving Syria: Assessing Options for Regime Change” (PDF), stating explicitly:

Some voices in Washington and Jerusalem are exploring whether Israel could contribute to coercing Syrian elites to remove Asad.

Israel could posture forces on or near the Golan Heights and, in so doing, might divert regime forces from suppressing the opposition. This posture may conjure fears in the Asad regime of a multi-front war, particularly if Turkey is willing to do the same on its border and if the Syrian opposition is being fed a steady diet of arms and training. Such a mobilization could perhaps persuade Syria’s military leadership to oust Asad in order to preserve itself.

This attempt to create a “multi-front war” amid the current Syrian conflict is a process that continues openly to this very day with news of Turkey and Israel engaged in now direct military aggression against the Syrian government aimed at dividing Syrian forces and reversing Syrian gains on the battlefield.

Trouble had also briefly erupted along the Syrian-Jordanian border where for years the US had – just as it did along the Syrian-Turkish border – funded, armed, trained, and equipped terrorists before sending them into Syria to fight.

The US Lurks Behind the Scenes

Despite attempt by Washington to portray itself as withdrawing from multiple theaters of military aggression, occupation, and confrontation around the globe there is little actual evidence it is doing so. Instead it appears to merely be attempting to hide its hand by deferring increasingly to proxies.

Its relative quietness regarding Syria was recently broken when US representatives were seen visiting the Turkish-Syrian border and even meeting with Al Qaeda-affiliates – the so-called “White Helmets.” 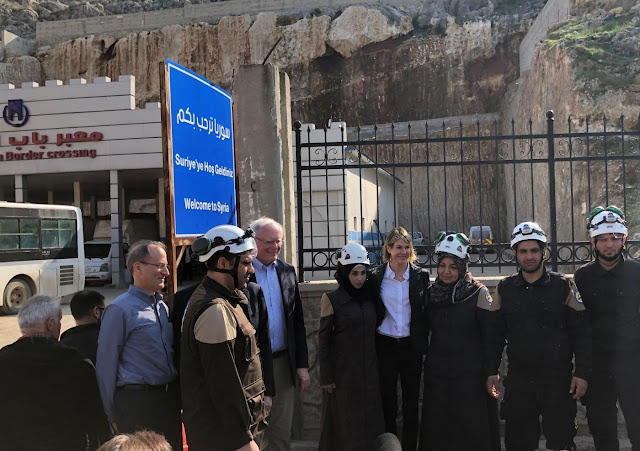 The Washington Post in its article, “U.S. officials visit Turkey’s border with Syria, emphasize support for NATO ally,” would report:

Three top U.S. officials toured Turkey’s border with Syria on Tuesday, even briefly crossing into Syrian territory, in a concerted effort to underscore one point: The United States is throwing its full support behind its NATO ally in its new fight against the Syrian government and its Russian backers.

As always – the Washington Post spins obvious facts – and in this case – attempts to portray the US as merely backing Turkey in its fighting in northern Syria rather than being the primary sponsor and impetus driving Turkey’s ongoing aggression and the Syrian conflict as a whole.

In addition to this very public display of official support for Turkey and its terrorist proxies – the Western media has collectively renewed its familiar propaganda war against Syria and its allies through the use of its various “humanitarian” rackets including fronts like “Human Rights Watch” and even pushing bias reports through the UN.

Coupled with Turkey’s own use of refugees as a political weapon – once again attempts are underway to cite “humanitarian concerns” to fish for public support and legal justification for even further escalations against Syria.

This most recent outburst of aggression from the US and its various proxies comes at a time where nearly all of Syria’s territory has been retaken by the Syrian government. Syria’s allies – Russia and Iran – have established deeply entrenched positions in Syria that all but total war will fail to dislodge.

Israeli airstrikes – however damaging they are on a temporary and tactical level – are futile on a strategic level. Airstrikes alone will not win the proxy war against Syria without a significant ground force able to exploit them. That ground force in the form of terrorists armed and backed by the West have been all but eliminated across Syrian territory.

Likewise – despite Turkey’s large military – it would need to confront and contain Russian airpower to gain the advantage needed to reverse its – and its proxies’ losses – in northern Syria.

Israel’s political isolation within the region and around the globe is – at the moment – all but irreversible – thus its apathy toward the damage its ongoing aggression in Syria is having on its international standings leaves few surprised.

Turkey – however – is giving up a potential opportunity to realign itself amid America’s decline and the emergence of multipolarism. While it still seems possible that Turkey can reverse the damage it is doing to its ties with the rest of the world – that window is undoubtedly closing.

Turkey will have to decide if it wants to end the Syrian conflict side-by-side Israel and – in particular – the US – which is in irreversible decline globally – or end it aligned with the conflict’s victors – including Syria’s allies Russia and Iran.

0 thoughts on “US-Israel Predictably Behind Turkish Aggression in Syria”