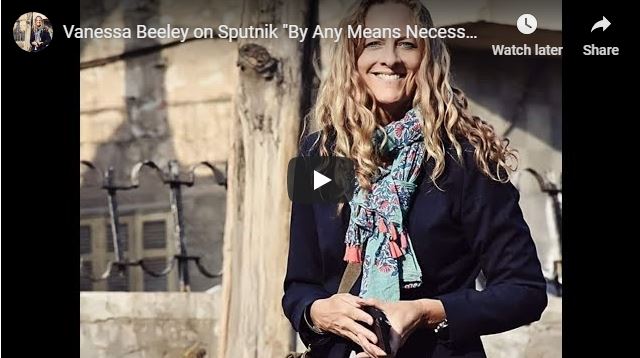 ” In the third segment, Sean and Jacquie are joined by independent journalist Vanessa Beeley to talk about conditions on the ground in liberated South Idlib, the pattern of military offensives and counter-attacks between the Syrian Arab Army and the Al Qaeda-led ‘moderate rebels’ which has come to characterize the armed struggle there, how Turkish President Recep Erdogan was violating the previous Turkish-Russian ceasefire agreement by continuing to supply the terrorist factions they’re using to create a ‘buffer zone,’ why the new ceasefire represents a masterful negotiation by Russia and a big win for the Syrian people, why Turkish invasions and other aggressions against Syrian sovereignty failed to draw the censure of NATO nations, why Syrian Arab Army offensives couldn’t possibly have succeeded without extensive civilian collaboration and what that cooperation says about the loyalties of everyday Syrian people, what the discovery of a British SAS operative in Syria reveals about the long-term strategic reorientation of NATO nations, and why the public is increasingly wary of the black-and-white media narrative presented by the establishment. ”

Guilty until proven innocent (again): UN report on alleged Russian ‘war crimes’ in Syria is based on ‘We Say So’ & unnamed sources