HOME / WORLD / What if Sheikh Ali Salman was free on this year’s Quds Day and was allowed to demonstrate! 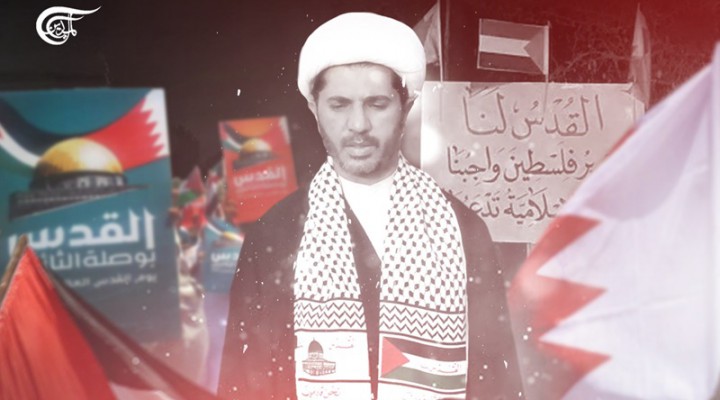 For years, the commemoration of International Al-Quds Day has drawn the attention of large sectors in Bahrain, where demonstrators took part in peaceful rallies which were often bloodily repressed.

Since its first spark, the media supported by the ruling regimes has deliberately demonized the peaceful popular movement in Bahrain and its inalienable demands; a spontaneous movement, which has emerged from the womb of marginalization, from villages wracked by discrimination and corruption, and from platforms that have always been keen on the sovereignty of the Bahraini official decision, its Arabism, and its commitment to the just Arab and humanitarian causes, especially the central cause present in the conscience of every Bahraini: Palestine.

Today, Bahrainis affirm the illegitimacy of the normalization agreement with the Zionist temporary entity and are keen to brand it as blatant and sinful treason.

An illegitimate step that was not endorsed by the people, not even by its patriotic leaders who are arbitrarily held in the dungeons of the regime, so that the world does not hear the true voice of Bahrain and its position on the crucial issues that shape the present and future of Bahrain and the nation; leaders who have been keen on true national and Arab constants, so they have been silenced.

Among those is Sheikh Ali Salman; a national leader who has been committed to perpetuating the principle of coexistence and dialogue among Bahrainis, though, the heavy-handed grip of the security state and the mentality of treason and political slander have obscured him, leaving Bahrain hostage to the coveted external decision on the citizens’ rights, capabilities, and political choices.

Undoubtedly, Sheikh Ali’s national thought has been formulated by his first teacher, Ayatollah Sheikh Issa Qassem, so he resolutely believed in the right to form a just system that reflects the will of Bahrain’s indigenous people and protects their freedoms, and has been consistent with the leader of genuine coexistence, reconciliation, and peace.

The Bahrainis’ daily anti-normalization demonstrations, despite the rampant state of repression and the barrel of guns aimed at the chest of every adherent to the legacy of Sheikh Ali Salman, explain the escalating terror of the authority and its systematic violations; an authority that does not care about the interests of the Bahrainis, but rather strives for empowering the Zionists on that land by transforming it into yet another Zionist colony and a platform of confrontation for open wars.

This year’s Al-Quds Day marks the seventh anniversary of Sheikh Ali Salman’s politically-motivated incarceration that proves the hypocrisy of the Bahraini authority, its cajoling and its stifling of freedoms; a corrupt and apartheid system that meets the Zionists in many aspects, for instance: Demolition of mosques; infringement of religious freedom; falsification of historical facts; torture of prisoners, and denial of treatment… etc.

Palestine in the thought of Sheikh Ali Salman

The Secretary-General of Al-Wefaq – arbitrarily dissolved – His Eminence Sheikh Ali Salman says, “For all the pain, the compass remains Palestine because it is a humanitarian issue in which justice has been continuously violated for over 70 years. Palestine remains the greatest wound and the greatest concern, and with the continuation of the aggression, the regimes of nudity are exposed. The problem of Palestine is complex; aggression that has been orchestrated by the British colonialism through the Balfour Declaration and then protected by the Americans, while the regimes have sold it through secret agreements and then overt agreements.”

Sheikh Ali Salman adds, “It is no longer a secret why Palestine does not triumph. No one wants to support Palestine, the majority is conspiring.” He believes that a large segment of people does not read the Palestinian scene accurately and stresses the importance of the role of the Palestinian resistance fighters who are struggling in very exceptional circumstances, geographically, financially, and logistically. Despite that and despite the comprehensive siege, they lead a legendary resistance and are steadfast to the extremes. His Eminence condemns the global conscience that has not spared any effort to talk about the oppression of the Palestinian people while the Arab conscience is literally paralyzed and cannot be relied upon.

Moreover, Sheikh Ali Salman avows the need to support the Palestinian people who were expelled from their land and deprived of their rights by colonialism and whose right to live in safety was confiscated in this geographical area that embraced Muslims, Christians, and [Arab] Jews together. He believes that this is an obligatory responsibility that falls in particular on the shoulders of the Arab people, who are linked by ties of language, nationalism, and geography, and then on the shoulders of Muslims, as Prophet Muhammad says, “He who prepares a fighter in Allah’s Cause is given a reward.”

He points out that most of these regimes didn’t take any single shot at the enemy and didn’t assist the Palestinians in their legitimate confrontation against the occupation. He affirms that this weakness in the nation structure has been at the expense of strengthening and empowering the Zionists.

Despite the calamities, disappointments, and betrayals, Sheikh Ali Salman upholds that the grievances of the Palestinian people are exceptional in history, as they have been subjected to comprehensive genocides with complete descriptions and features and considering that these people have been scattered inside and outside historic Palestine. He says that the United Nations, unjustly, contributed to this division and diaspora.

According to Sheikh Ali, the Palestinian people rose up and led a brave confrontation, without any assistance,  because of the regimes that have purposefully deterred their own people from supporting them for political reasons. Then, Sheikh Ali praised the exceptional role of the brave Lebanese resistance in confronting this conspiracy plan despite its limited capabilities.

Regarding the International Al-Quds Day rallies, His Eminence asks, “How many systems allow pro-Palestine rallies to go out and collect donations for the resistance in Gaza and the West Bank?” noting that averting fundraising campaigns deprives Palestinians of education, treatment, and rebuilding their homes, as this aims to displace them and empty Al-Quds and other Palestinian areas of the indigenous Palestinian population. As for charging the Palestinian leaders with the consequences of the occupation and ethnic cleansing practices, he wonders, “What can the disenfranchised do?” but to “stand in front of narrow and costly options for which the regimes bear the responsibility”.

Sheikh Ali points out that the political events that took place in the region in the aftermath of 2011 have weakened the Arab position, especially the role of the Syrian Arab Army. As for the position of the Bahraini people, His Eminence affirms that the people of Bahrain live this cause with all their conscience and as an essential part of their causes. He affirms that the Zionist entity is the main belligerent that will benefit from the Arab faintness, in light of governments that liquidate, marginalize and – despite their people’s resistance – spend more on murdering souls than on scientific research.

The religious and humanitarian imperative will remain in the interest of the Palestinians, Sheikh Ali Salman vows, until the Palestinian right triumphs over the Zionist aggression, and this is inevitable according to the Qur’anic given, for God does not break his promise. He points out that “if the governments had taken the course of the Islamic Republic of Iran, the occupying entity would not have been stable and would not have been strong. Only the Iranian case has succeeded in combating this entity and rejecting the state of submission and humiliation.”

It is very natural for this question to be raised this year on Al-Quds Day, especially after the acceleration of the normalization steps with the temporary entity. For many years in Bahrain, Nasserist, leftist, and religious currents, Sunni and Shiite, participated in this occasion, except for those who disappeared for well-known and “understandable” reasons, even before public normalization, those who fear the regime and dare not to raise up against false policies.

For years, the commemoration of International Al-Quds Day has drawn the attention of large sectors in Bahrain, where demonstrators took part in peaceful rallies which were often bloodily repressed. For instance, youth Muhammad Juma’a Al-Shakhouri was killed in April 2002, in response to provocations by the then-US ambassador to Bahrain, Ronald Newman, regarding his support for the occupation, and his belief that its soldiers who had been killed “because of the Palestinian uprising deserves a pause of mourning.” This provocation, then, made thousands of Bahrainis head to the American embassy, raising slogans supporting the Palestinian uprising yet the Bahraini police repressed them.

This event, which has taken place 20 years ago, is expected to be doubled now given the entry of the Mossad into the joints of the security structure of Bahrain, which may suppress many rallies related to Palestine within various Bahraini villages.

0 thoughts on “What if Sheikh Ali Salman was free on this year’s Quds Day and was allowed to demonstrate!”