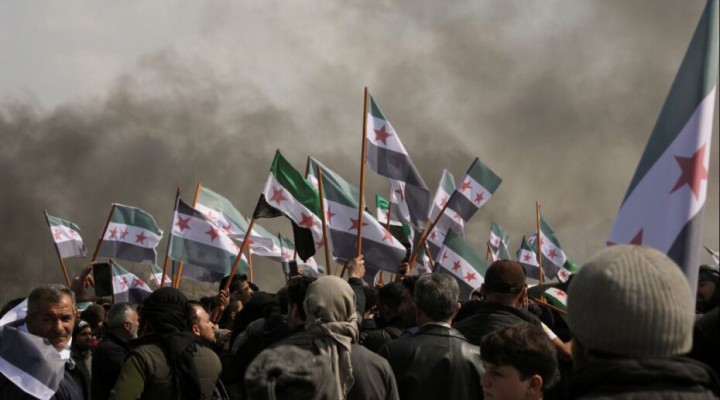 The legacy from events a decade ago still reverberate to this day. Several members of the current Biden administration bear responsibility for the destruction, including the present Secretary of State Antony Blinken.

Ten years ago this month, the Middle East and North Africa were convulsed by uprisings and subterfuges. The Arab Spring is generally thought of as a single wave of pro-democracy movements that swept the vast region. Far from it, however, the events were a mixed bag in which Western powers were not on the right side of history, as Western media would portray. Indeed, these powers played a nefarious role to ensure that the Arab Spring was kneecapped in order to cripple any progressive potential.

A look at the contemporaneous events in Bahrain, Libya and Syria shows the baleful role that the United States, Britain and other European NATO powers actually played. The Arab Spring certainly encompassed many more nations, but the specific events in those three mentioned Arab countries highlight the pernicious agenda of the Western powers which has left an ongoing legacy of misery, failure, conflict and terrorism for the entire Middle East and North Africa region.

As reported in a previous commentary, the American and British governments played an instrumental role in suppressing a popular revolution in Bahrain, which began on February 14, 2011, against a despotic but pro-Western monarchy – the Khalifa regime – which is also a surrogate for the richer and more powerful House of Saud regime in neighboring Saudi Arabia. The Saudis were given a green light by the Americans and British to invade the Persian Gulf island on March 14, 2011, to brutally put down a month-long uprising by a majority of Bahrainis who were demanding free and fair elections, human rights and independent rule of law.

The irony is that Washington and London were claiming to support these same democratic values in other Arab countries which were undergoing unrest.

On March 15, 2011, Western governments and media hailed what they called was the beginning of a “pro-democracy” uprising in Syria against the government of President Bashar al Assad. Then on March 19, the United States, Britain and other NATO powers began a military intervention in Libya said to be in the name of “protecting human rights” from the armed forces under control of the head of that state Muammar Gaddafi.

The Americans and British were compelled to move quickly to suppress the Bahraini revolt because it potentially threatened the entire chain of absolute Gulf Arab monarchies. If democracy were to emerge in Bahrain that would be destabilizing for the other oil-rich Gulf states whose authoritarian rule is vital for sustaining the global petrodollar system and Western imperial interests in the Middle East, not least of all lucrative military exports. Sacrificing Bahrain’s democratic aspirations was the price that Washington and London were all too willing to pay, without a qualm.

To this day, Bahrain’s democratic aspirations are violently repressed by the monarchy in league with Saudi rulers, as well as American and British complicity, including media silence.

When the Saudis received the green light for invading Bahrain on March 14, 2011, the quid quo pro, according to Pepe Escobar, was that American Secretary of State Hillary Clinton got assurance from the Gulf monarchies that they would ensure no objection among the 22-nation Arab League for the imminent NATO military intervention in Libya. Thus the suppression in Bahrain paved the way five days later for the NATO blitzkrieg on Libya, a relentless eight-month aerial bombing campaign that culminated in the overthrow and murder of Gaddafi on October 20.

Subsequently, Libya would precipitously descend from the foremost developed nation in Africa into a war-torn failed state riven by civil war, jihadist warlords and human trafficking which has plagued Europe to this day. It is grotesque that the Americans, British and other NATO powers justified their criminal aggression on Libya in the name of protecting human rights and promoting democracy as part of the Arab Spring events.

What’s even more reprehensible, the failed state of Libya would soon become a supply route for the CIA and British MI6 to deploy jihadist mercenaries and weaponry for the NATO and Arab sponsored regime-change operation unfolding in Syria.

On March 15, 2011, one day after the Anglo-American sponsored operation to kill the democracy movement in Bahrain, events took on a sinister development in Syria. In the southern Syrian city Daraa on the border with Jordan, rooftop snipers killed security forces and anti-government protesters. The Western media immediately hailed the beginning of a pro-democracy movement in Syria against the central Assad government in Damascus. But scarcely reported then or since was that the snipers were covertly deployed by NATO powers in what would ignite a regime-change war. That war, which lasted for nearly 10 years and continues to destabilize Syria’s northern border, was cynically and disingenuously portrayed by Western media as a pro-democracy uprising when in reality it was a covert war of aggression by NATO powers, financed by Gulf Arab regimes and involving jihadist mercenaries recruited from dozens of countries.

Libya was a key link in the CIA and MI6 operation know as Timber Sycamore which funneled terrorist fighters and weapons to Syria to propagate the secret NATO war to overthrow President Assad. That operation eventually failed largely because of the military intervention in late 2015 by Russia in support of the Syrian government. Support from Iran and Lebanon’s Hezbollah was also vital in defeating the Western powers’ regime-change plan.

The legacy from events a decade ago still reverberate to this day. Several members of the current Biden administration bear responsibility for the destruction, including the present Secretary of State Antony Blinken. Libya is a divided nation racked by economic collapse despite its vast oil wealth. Syria is war-torn with a death toll of perhaps 500,000 and struggling with reconstruction because of American and European sanctions against the Assad government. The terrorism that was spawned in those countries for the Western objective of regime change continues to haunt the Middle East and beyond.

And, as for Bahrain, a long-suffering people who simply demanded democracy were and continue to be brutally suppressed by despotic Arab regimes at the behest of the United States and Britain – two nations that claim to be exemplars to the rest of the world for democracy, human right and rule of law.