HOME / WORLD / Palestinians are not merely the PA’s political appendages 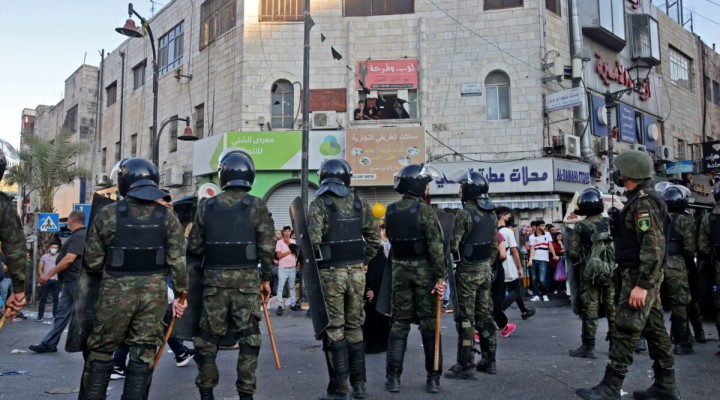 The Palestinian Authority has two ways of dealing with detainees and demonstrators. When the occasion arises, particularly if coordinated hunger strikes by Palestinian prisoners in Israel jails make international headlines, the PA has no qualms about appearing at demonstrations and calling for their release. These PR stunts by PA officials alongside the relatives of Palestinian prisoners are pathetic attempts to portray the leadership as being involved actively in anti-colonial resistance.

When the PA’s security services are arresting Palestinians, however, and creating more prisoners, the narrative changes, because resistance from within against corruption and violence does not suit the illegitimate “leadership” in Ramallah. Suddenly, Palestinians become instigators to be rounded up, detained, beaten and even killed under legislation such as the Cybercrime Law, or within the context of Mahmoud Abbas’s “sacred” security coordination with Israel.

The recent protests following the murder of Nizar Banat by the PA security services highlighted the leadership’s hypocrisy over Palestinian resistance. When criticism veers close to home as a result of security coordination and corruption, the PA abandons all pretence of revolutionary rhetoric. Killing the revolution, after all, is what the PA is subcontracted by Israel to do.

Using violence against legitimate protesters is not only proof of the PA’s authoritarian strategy, but is also reminiscent of the times that Palestinians have been left unprotected on the streets after the PA called for protests against Israeli political decisions. The Trump-Netanyahu era was replete with such instances. When the PA called for a “day of rage” against the unilateral US acceptance of Jerusalem as Israel’s capital, for example, it failed to provide security cover for the demonstrators who were left to the far from tender mercies of the Israeli occupation forces. It is a fact that the PA’s 70,000 security officers are never to be seen when ordinary Palestinians are attacked by Israel’s illegal settlers, soldiers and police.

In the PA’s narrative, therefore, Palestinians are appendages that can either serve or threaten the carefully nurtured status quo. If the leadership sees a benefit for itself, it will laud the courage and dignity of Palestinian civilians, as it does when the PA requires backing for its “peace process” obsession and the two-state compromise, obsolete impositions which have impoverished Palestinians through dependence on humanitarian aid, while marginalising the people from politics. The dignity of the Palestinian people, however, makes them very aware of corruption from within, and they are bound to rise against any entity that shackles them to colonial rule and violence, regardless of the perpetrators. They are most certainly not merely the PA’s political appendages.

By killing Banat, the PA’s security services have established themselves firmly against the Palestinian resistance and, indeed, the people of occupied Palestine. Not that any proof was ever needed about this, but the murder itself should alter the narrative associated with the PA, which talks about “state-building” and [Israel’s] security. Instead, we need to hear a clear assertion that the PA’s donor-funded existence has gradually found itself in danger of collapse and helplessness, were it not for its inherent violence, in front of a population that has the potential to unite and clamour for change.

Unless the PA changes tack — and there is no indication that it will — there is nothing preventing the Palestinian people from rallying against all forms of colonial violence. Banat’s murder showed that there is no security for Palestinians ruled by an authority which adopts colonial tactics when facing justified criticism from the people it is supposed to represent.