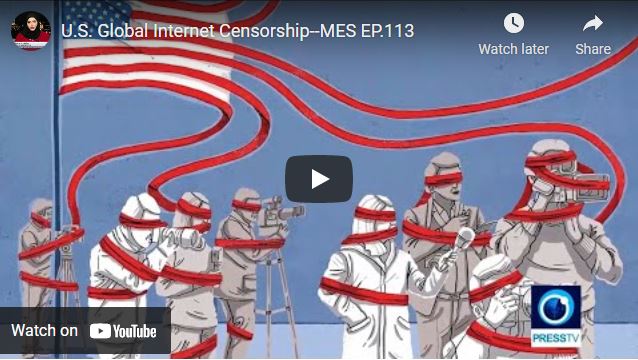 More than 30 web domains linked to the Axis of resistance one of which is our own Press TV were blatantly seized by U.S. agencies last week. The U.S. seized sites operated inside Iran, Iraq, Yemen and Lebanon as well as social media channels affiliated with the Iraqi Resistance the PMU. The seizures come as the Biden administration is in the midst of negotiations over Tehran’s nuclear program and follow the election of a new president who has been criticized by Washington for being a staunch detractor of its imperial foreign policy. The Iranian government condemned this act of censorship as unlawful and part of an influence campaign against the Islamic republic of Iran.

To discuss this issue with us from Beirut is Hadi Chatila founder of IbreatherMedia.

Meanwhile, it seems that death in PA custody no longer differs that the Israeli occupation’s use of ruthless excessive force against Palestinians during incarceration. An outspoken critic of the Palestinian Authority who intended to run in parliamentary elections before they were cancelled earlier this year died during his arrest in Hebron by PA forces on Thursday. Nizar Banat, 44, was a harsh critic of the Palestinian Authority, which governs parts of the Israeli-occupied West Bank, and called on Western nations to cut off aid to it because of its growing authoritarianism and human rights violations.