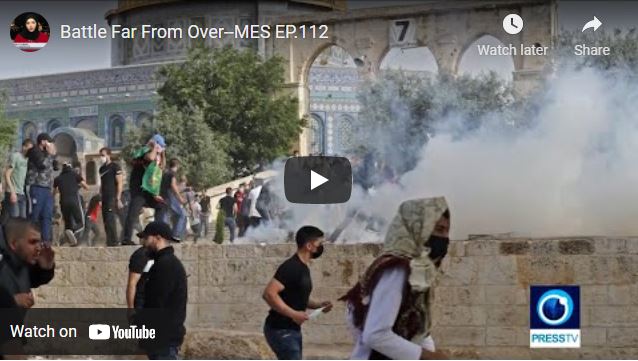 Once again, the occupied West Bank, Al-Quds, and the Gaza Strip borders are turning into a theater of confrontations after a few days of relative calm. As individual operations are back in the forefront again in the occupied territories as a result of “Flag March” organized by illegal colonial settler. The march had already been postponed twice due to threats from the Palestinian resistance factions. The march took place indeed last week but the Zionist settlers suffered many disappointments as it seemed their march was forced to change path for the first time in its history, after it passed annually through the Old City of Al-Quds towards the Al-Aqsa Mosque. This year however, the Palestinian unity forced the settlers completely away from the gates of the Old City.

To discuss this issue with us from the west bank is Dr. Amal Wahdan human rights advocate.

The importance of the Iranian presidential elections lies in the fact that it comes in the light of a fierce and unjust war against the Islamic Republic of Iran at all political, economic, cultural and even social levels. It is so because of Iran’s great role in halting the implementation of the western agenda that was targeting the entire region in order to divide it into rival states that would facilitate the Zionist entity’s scheme of achieving its racist terrorist project in west Asia. The massive popular turnout of all sects at the polling stations stifled the mouths of those who harbor spite for the Islamic Republic and its resistant people who suffer the illegal and inhumane western sanctions put forth to punish nations for their political choice.

To discuss this issue with us from Tehran is Mostafa Khoshcheshm Iran affairs analyst.

Change in the Middle East?