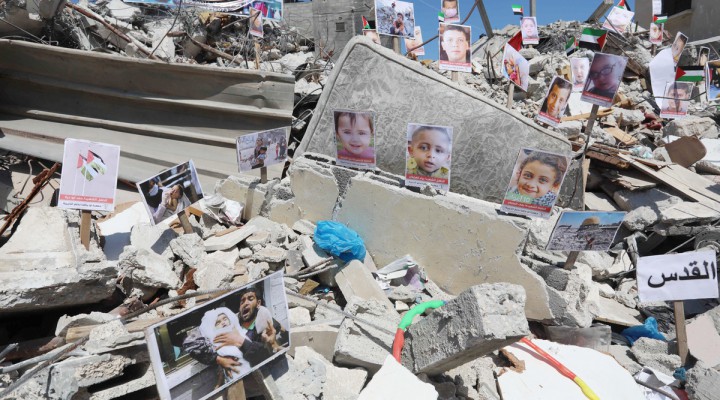 The international community speaks of mechanisms, while Israel is preoccupied with exploiting the need for Gaza to be reconstructed to free the Israelis held by Hamas in the enclave. Meanwhile, displaced Palestinians face yet another round of humanitarian deprivation, even as the dissociation between the experience of displaced Palestinians and the politics seeking to prevent reconstruction becomes more apparent.

Building upon former Israeli Prime Minister Benjamin Netanyahu’s colonial aggression, Naftali Bennett wasted no time in promoting his blatantly violent agenda. Israel, the new prime minister and former settler leader, said, “Does not have any intention to harm those who have not risen against us in violence, and those who are held captive by a ruthless and violent terror organization.” His attempt to make the resistance movement the issue rather than Israel’s brutal military occupation — which predates Hamas by decades — exposes the deceitful narrative at which Zionists are expert.

With over 100,000 Palestinian civilians displaced, not to mention those murdered in the latest bombardment of Gaza, Bennett’s words would have been best left unspoken, if it were not for the fact that the international community needs such rhetoric to justify its support for Israel’s security and “self-defence” narrative and, in turn, the killing and displacement of Palestinian civilians.

Last month, Israeli Defence Minister Benny Gantz spoke about making Gaza’s reconstruction conditional upon the return of the Israeli prisoners held in the territory. Bennett’s recent rhetoric builds upon Gantz’s initial statements, differentiating his tactics from those of Netanyahu who, throughout his tenure, failed to accomplish this demand. “Now it is our watch,” Bennett declared, “and we are committed to this.”

With Israel playing a leading role in the enclave’s reconstruction, which depends upon donor funds, the process is set to be exploitative, in the same manner that each Israeli military offensive has exploited the Palestinian people’s will to survive. Hundreds of Palestinians in Gaza have been displaced repeatedly as a result of Israel’s colonial violence, to which the international community is now failing to react more than ever before. Gaza’s reconstruction is yet another macabre game testing Palestinian resilience, to the point of normalizing the existence of a blockaded, densely populated sliver of land that has become synonymous with images of families photographed against a backdrop of houses reduced to rubble. That Palestinian resilience is being tied to the ramifications of colonial violence, while the humanitarian aid program does a disservice to the civilians who have no other option, having been politically silenced through deprivation.

Gaza’s reconstruction should be tied to the destruction of Israel’s brutal occupation. Bennett’s demands are incoherent in this context. It is only in Israel’s twisted narrative that Gaza’s reconstruction depends on such irrelevance. Palestinians have had their homes willfully destroyed in a spectacle of military might, which the international community simply sat and watched (and in some cases supported with more arms). The latter will only preoccupy itself with a role in the humanitarian veneer, leaving Israel free to make its demands without interference.

Furthermore, Bennett’s threats about yet more Israeli colonial violence points to a lengthier process in terms of reconstruction. The international community has failed Palestinians yet again. Without pressure on Israel to reconstruct what remains after its bombs and missiles have done their worst, the cycle of internal forced displacement is set to worsen. Donors will find themselves paying to reconstruct buildings not for the Palestinians to use, but for Israel to destroy when it determines that it is time to escalate the colonial process even more.