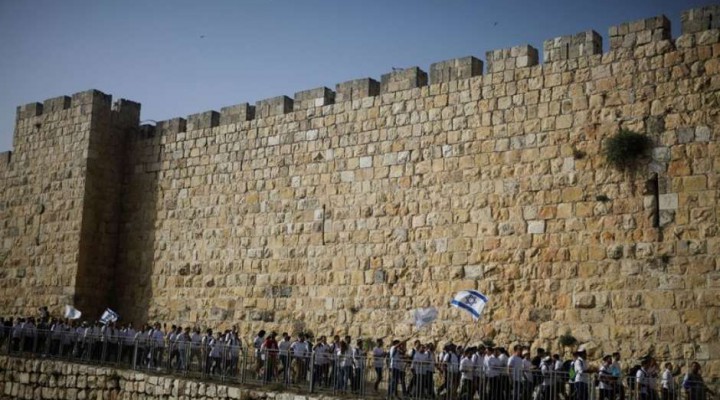 Ongoing Israeli killings, arrests and provocations could trigger a resumption at any moment

Nearly a month after the cease-fire that ended the latest 11-day war on the Gaza Strip, the situation is virtually unchanged, and tensions are peaking.

The suffocating blockade of the Gaza Strip persists, and Israeli warplanes continue to carry out raids against Hamas’s infrastructure there.

The so-called March of the Flags went ahead on schedule on Tuesday, with thousands of Israeli troops protecting Jewish supremacists as they chanted racist and genocidal anti-Arab anti-Muslim slogans, hurled abuse at the Palestinians and taunted them about Israel’s ties with Arab states such as Saudi Arabia and the UAE.

Assassinations and arrests of Palestinians have meanwhile been continuing, with Israeli troops regularly killing Palestinians in the West Bank, most recently a woman in Abu-Dis and earlier a young girl, while rounding up and detaining scores of activists involved in the defence of the holy places.

Amid the tension and ongoing repression, calls are growing on Hamas, Islamic Jihad and other resistance factions to retaliate with missiles to these provocations and acts of aggression, and specifically to resume their bombardment of Israeli settlements in response to the March of the Flags.

The responsibility for responding does not only lie with the resistance factions. It lies with all Arabs and Muslims. The marchers chanted ‘Death to the Arabs’ and mouthed curses against all Muslims, their faith and the Prophet Muhammad. Nothing could better illustrate the sorry state of the Arab and Islamic worlds than the fact that these racist extremists were at the same time boasting of Israel’s newfound friendship with Arab and Muslim regimes. Had they thought their behaviour would provoke a backlash from 1.5 billion Arabs and Muslims around the world, they would never have even been there. But these ‘normalizers’ did not lift a finger and showed none of the outrage they did over those famous French and Scandinavian cartoons.

When the resistance factions in the besieged Gaza Strip rose in defence of al-Aqsa last month and bombarded Israeli cities with missiles, not a single Arab army stood by them and most Arab and Islamic governments kept silent, as though defending al-Aqsa were a purely Palestinian concern.

They launched 4,000 rockets and kept going until they exhausted Israel‘s stockpile of Patriot missiles and wrecked their reputation, forcing Benjamin Netanyahu to implore Joe Biden to intercede and arrange a truce.

Wars consist of battles and rounds. The heroes of the Gaza Strip will not stop resisting the occupation until they have liberated every inch of Palestinian territory. Having achieved self-sufficiency in missile production and a measure of deterrence against Israel against all the odds, they know best how and when to continue the struggle.

They have already resumed incendiary balloon attacks against Israeli border settlements by way of warning. The missile launches could be restarted at any moment.

0 thoughts on “Gaza: the war isn’t over”