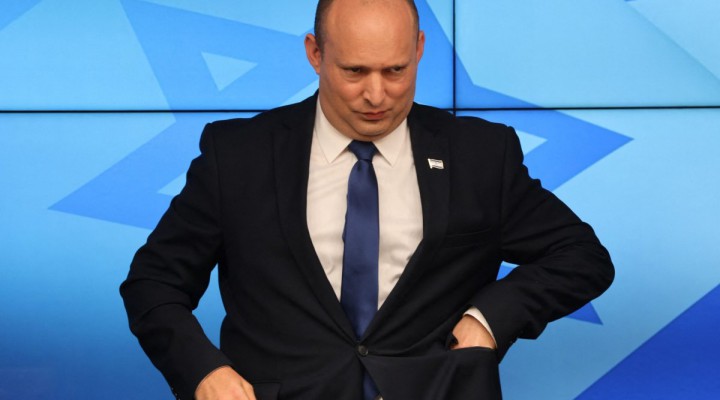 Israeli Prime Minister Naftali Bennett is playing with words to advance the colonial state’s de-facto annexation of the occupied West Bank. In an interview with the New York Times, Bennett used spin about compromise which amounted to nothing other than promoting colonial expansion while retreating on formalising another land grab.

“This government will neither annex nor form a Palestinian state, everyone gets that,” Bennett said. “I’m prime minister of all Israelis, and what I’m doing now is finding the middle ground – how we can focus on what we agree upon.”

While diverging political views among Israelis may have prompted Bennett to shift towards a compromise, particularly as his is a coalition government, the issue at stake is still the colonisation of Palestinian land. Moreover, the Palestinians have been removed from the equation.

Bennett’s euphemism for colonial expansion in the occupied West Bank is “natural growth”. Whether annexation happens formally or not, the aim is clear: Israel will not allow a Palestinian state to emerge, and land grabs are the only way to ensure the fragmentation of Palestinian territory. Israel’s collusion with international institutions on this point has made a mockery of the Palestinian Authority’s illusory state-building.

History, however, is excluded by both Israel and the PA, for Israel’s benefit of course. Bennett’s aim is to portray his politics as different from his predecessor Benjamin Netanyahu, whose deals with the Trump administration bolstered a series of concessions which culminated in the Abraham Accords.

The PA, on the other hand, is eager to assert an independent political process, but it is unable to do so, given that it is beholden to international donor funding for its existence. And although PA officials will not admit it, history has long decided that a Palestinian state will not come into existence. That is, until history is accounted for and acknowledged, and Palestine is discussed politically from a decolonial perspective.

Bennett is hardly the figure of influence in terms of Palestine’s disappearance, even though the “no Palestinian state” claim emanated from him as Israel’s prime minister. Appeasing the Biden administration is a strategic move for Israel which does not necessarily interrupt Israel’s annexation plans. After all, the formalisation of its colonial land grab was merely postponed, not cancelled altogether. Compromise may be an integral part of Bennett’s rhetoric now, due to Washington’s overtures about the two-state compromise, and the necessity for Israel to appear hypocritically compliant. However, the key term here is “natural growth”, meaning that Bennett’s approach, while not leading directly to formal annexation, will establish the conditions for Palestine’s impending depletion.