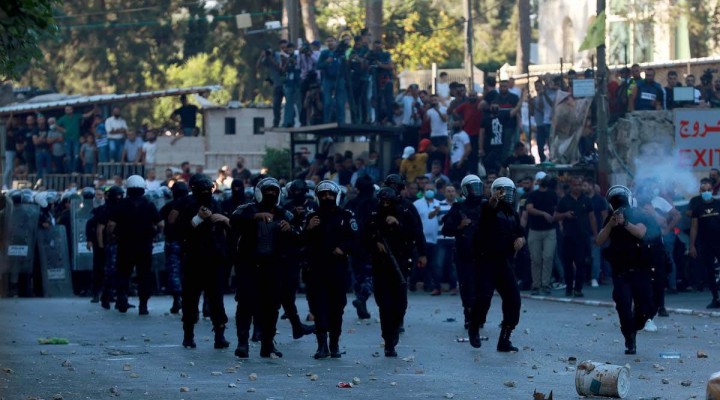 The Palestinian Authority has stepped up its notorious “accomplishments” against the Palestinian people. Statistics published by the Palestinian Centre for Development and Media Freedoms (MADA) show that in June, the PA’s violations against journalists, for example, exceeded those committed by Israel.

Amid growing criticism and dissent against the PA, which was heightened with the extrajudicial killing of Palestinian activist and critic Nizar Banat, Prime Minister Mohammad Shtayyeh attempted to appease Palestinians with rhetoric about freedom of expression in PA-controlled areas. The authority’s actions demonstrate that this is a fallacy.

“There was a clear official Palestinian attempt to prevent media outlets and journalists from covering the protests that took place in the West Bank after the killing of human rights and political activist Nizar Banat,” explained MADA. “This was in order to prevent transferring the reality of what is happening on the ground, without any consideration for press freedoms or the safety of journalists.”

Yet if the PA thought that Banat’s extrajudicial execution would silence Palestinians, it was wrong; the opposite is true. The PA now has two options: the ideal would be to listen to the Palestinian people’s grievances and hold democratic elections; it’s a risk for those in power, but it is for the good of the people. The other, which appears to have been endorsed unequivocally by the same people in power, is to remain in charge at the expense of the people, even if it means killing the more outspoken members of Palestinian society. As for the others, intimidation and violence, the PA believes, will keep the majority in their place. And for now, it might be enough.

However, the PA has given ample evidence of how it works as a subcontractor for Israel’s colonial violence, and how entrenched its role is in Israel’s colonial expansion. Killing a critic was not enough. Media personnel are once again prominent targets, as it is through journalism that the PA can be exposed as the corrupt entity that it is. The PA’s international donors have no objection to its violence, as security coordination works in Israel’s interests, and Israel’s main preoccupation at the moment is for the PA led by Mahmoud Abbas to remain in power, so that the status quo in Palestinian politics is not altered.

The Biden administration, meanwhile, is on track to help the PA achieve its authoritarian aims. A recent visit by the CIA’s director William Burns was reportedly about “strengthening the Palestinian leadership under Mahmoud Abbas.” No effort is being spared in the struggle to contain Palestinian dissent against the PA, which increases the likelihood of increased violence by the PA’s vast security network against the Palestinian people. Meanwhile, the international complicity against Palestinians is raised to a new level, and journalists in Palestine — and truth — are among its victims.