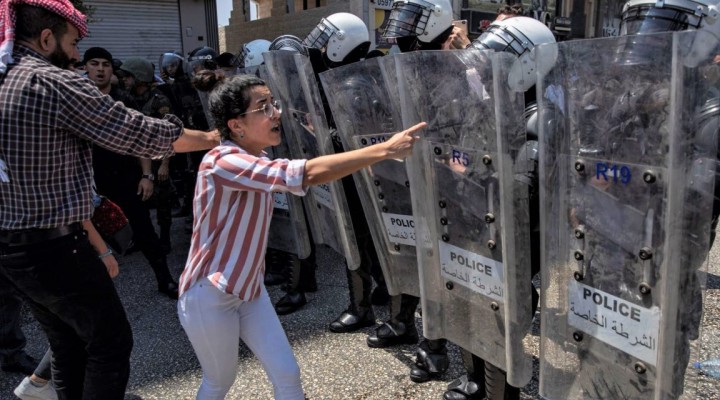 In the wake of Palestinian protests against the Palestinian Authority (PA), Israel, the US, and the PA itself have no qualms about exploiting donor funding and concessions, to quell the possibility of a power vacuum that disrupts the two-state diplomacy.

With its recent politically-motivated decisions – the cancellation of elections and the extrajudicial killing of Palestinian activist and critic Nizar Banat, the Palestinian Authority (PA) validated its reputation of not being representative of the Palestinian people. If its diplomatic overtures abroad allowed it a semblance of legitimacy in the past, despite its dissociation from Palestinians, the protests – which are happening on a regular basis across the occupied West Bank – are significant enough to warrant joint attention by the US and Israel. The Palestinian people are calling for justice, and while the PA has nothing but violence to quell the widespread discontent, the US and Israel have the resources to keep the PA in place, until its presence can no longer contribute anything to Israel’s colonial expansion.

The US Deputy Assistant Secretary for Israel and Palestinian Affairs, Hady Amr, triggered alarm bells during visits to Ramallah, Jerusalem, and Tel Aviv in July. “I have never seen the Palestinian Authority in a worse situation,” Amr stated, while underscoring the need to assist the PA to navigate the current crisis. The US, Amr said, stands ready to help. Coinciding with Amr’s visit, Israel announced it would withhold US$180 million in tax revenues collected for the PA.

The US and Israel intend to manage the current status quo to prevent the probable default of Hamas taking power.

The US and Israel intend to prevent an escalation of the political sentiment among the Palestinian people, fearing that the PA’s collapse would pave the way for Hamas to consolidate its base. Yet it is precisely the undemocratic approach utilized by the PA and the international community which gives Hamas a vantage point if democratic elections were to be held. With the PA persecuting dissenting voices, to the point of murdering them as Banat’s case illustrates, the status quo in Palestinian politics has little chance of changing. Of course, the US and Israel intend to manage the current status quo to prevent the probable default of Hamas taking power should the PA disintegrate.

The PA’s financial crisis was exacerbated in 2019, when Israel decided it would withhold over US$43 million in tax revenues collected on behalf of Ramallah, from which the PA would pay monthly salaries to Palestinian prisoners and their families. At the time, PA leader Mahmoud Abbas publicly adopted resistance rhetoric, while also pleading with the international community to step in and alleviate the crisis – a tactic which was regularly repeated throughout the years of the Trump administration and which ostracized the PA from the political scene.

Yet the PA’s comeback when US President Joe Biden was elected remained based on compromise with Israel and the international community. As the US dangled promises of inclusion, the PA was swift to reverse its halting of security coordination with Israel, while retaining the vague promise of Palestinian legislative elections, until Abbas cancelled them by utilizing Israel’s policy of preventing Palestinians in occupied Jerusalem from voting, thus buying more time for the PA and Israel. Palestinian President Mahmoud Abbas speaks during a joint statement with US Secretary of State Antony Blinken, May 25, 2021, in the West Bank city of Ramallah. The US and Israel fear that the PA’s collapse would pave the way for Hamas to consolidate its base. (AP Photo/Alex Brandon, Pool)

Amr’s warnings, however, are dire for all complicit actors involved. Should the PA disintegrate, the Palestinian people stand a chance at a different political representation which may not endorse all that the PA has stood for, although pragmatism in the form of the two-state compromise will likely remain a key component of any other representative.

However, the unknowns of dealing with a political hierarchy that is not the PA threatens much of the diplomacy which the international community and Israel have structured around Palestine. The two-state compromise coerces Palestinians into donor dependency as compensation for removing their political rights. As much as Israel cannot risk a reversal, neither can the international community, despite the latter’s professed, and purported, support for Palestine.

The two-state compromise coerces Palestinians into donor dependency as compensation for removing their political rights.

Israeli Prime Minister Naftali Bennett is taking no risks. Ahead of Bennett’s foreign aides’ visit to Washington to meet with their US counterparts, an unnamed Israeli official summed up the Israeli government’s position with regard to the current instability the PA is facing. “Our policy is first and foremost to strengthen the Palestinian Authority. Whatever Hamas receives, three times as much should be given to the PA,” the official declared on condition of anonymity.

While Bennett’s approach marks a shift towards the current US foreign policy which retains the two-state compromise as a fundamental premise, unlike the previous administration and the “Deal of the Century,” it is clear that neither the US nor Israel wish to face a vacuum in Palestinian politics.

From his end, Abbas is of course cooperating, reiterating his willingness to restart negotiations with Israel, even as Palestinians on the streets are clamoring for justice and political accountability towards the people. In an interview, the PA’s Civil Affairs Minister, Hussein Al-Sheikh, attempted to portray the diplomatic relations between the US and the PA as creating a favorable road map. But there are no “new facts,” as Al-Sheikh described Amr’s feedback on the situation.

The PA stands between two roads – accepting further Israeli and US intrusion, which will be sweetened by financial gain, and facing the demands of its citizens. Given that the PA prioritizes its survival, there is no doubt it will veer towards what the US-Israeli approach has to offer. A leadership which views its citizens as an inconvenience will not aspire to accountability, and the Palestinians’ political aspirations will be dealt another setback.

Part of the Israeli economic incentives will be to offer 15,000 work permits for Palestinians to work in the Israeli construction sector. Again, according to Defense Minister Benny Gantz, the aim is to prevent Hamas from any form of political gain.

Part of the Israeli economic incentives will be to offer 15,000 work permits for Palestinians to work in the Israeli construction sector.

Israeli colonialism is based upon minimizing the presence of Palestinians. A look at the history of colonial landgrab in Palestine shows that Israeli governments have been partial to upholding the barren land myth, thus forcing Palestinians into displacement. The less visible Palestinians are, the more possible it has been for Israel to build its narrative based upon land grab and industrialization.

Exceptional circumstances are now calling for a pause in the mainstream settler-colonial trajectory. Israel cannot risk a people’s revolt against the PA, which would have repercussions on its current de-facto annexation plans.

The PA lauds donor aid, and Palestinians have been forced into a humanitarian program for decades. Israel’s approach, although urgent, is no different from what the international community designated for Palestinians – the abandonment of political rights in return for managing colonialism into a “conflict.”

It is a difficult task for Israel to ignore Palestinian anger against Abbas, hence the Israeli manipulation of the PA’s weakness takes center stage. The PA cannot risk further political imbalance and as a result, it will allow Israel to exploit the fact that it holds no support on the ground, as long as its dominance can be asserted through funding for its echelons and exploitative compensation for the people.