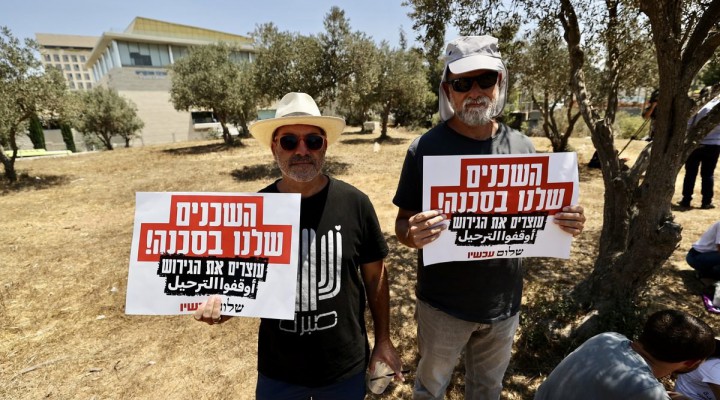 So brief is the international community’s attention span when it comes to Palestinian rights, that the forced evictions planned by Israel for the residents of Sheikh Jarrah have become a dissociated event of the past few months. As the furore over Israel’s bombing of Gaza abated, so too did the international community’s attention, leaving the Palestinian residents of Sheikh Jarrah to face an abominable “compromise” proposal from Israel’s Supreme Court.

The court suggested that four Palestinian families faced with evictions should concede their ownership of their properties to the Nahalat Simon settler group, in return for which they would be recognised as “protected tenants”. There is no compromise in this proposal: the Palestinians would be paying an annual “rent” to enhance illegal Israeli settler supremacy over Palestinian land and dwellings, while the settlers’ “concession” is meagre given that Israel owes its existence to the ethnic cleansing and forced displacement of the Palestinian people. Such a proposal merely delays the evictions.

The Palestinians have rejected the so-called compromise and Israel’s Supreme Court has deferred its verdict, although the deferral may well constitute a prolonged approach to the ultimately inevitable deterioration of Palestinian rights over their own land. For the Palestinians to be assured of ownership, the Supreme Court needs to rule in favour of Palestinian land rights, which existed long before the settler movement became an important tool for the expansion of the colonial state.

Yet the Palestinians will most likely stand alone in the face of settler supremacy and the international community’s non-committal approach to Israel’s latest tactic for colonial expansion. The US State Department has recommended against forced displacement in Sheikh Jarrah, but its statement holds no weight in comparison with the billions of dollars given by the US Treasury to Israel every year in support of its colonial expansion.

The Palestinian Authority, keen as always to make a meaningless statement rather than support Palestinians facing evictions, accused Israel’s judiciary of complicity with the state’s ethnic cleansing agenda. And yet the PA’s political position itself encourages Israeli colonialism, beholden as it is to the two-state compromise.

As things stand, Sheikh Jarrah’s residents are facing the Israeli state and its settlers with no political support from the PA or the international community. The court’s suggestion offers no protection to the Palestinians; indeed, it leaves them at the mercy of a settler organisation whose aim is to displace as many Palestinians from Palestinian land as possible. What is happening in Sheikh Jarrah is a continuation of the displacement by Zionist paramilitaries during the Nakba. Israel knows it cannot use force as it did decades ago, but its institutions are attuned to the colonial process and there is no disconnect between the state’s intention, settler violence and judicial bias towards managing the expulsion of Palestinians.

The Palestinian families have rightly rejected the court’s proposal, which recognises Israeli ownership and legitimises the first step towards making them refugees. The compromise stands only for three generations of Palestinians; it’s not permanent. Moreover, we know that the state will never penalise settlers who decide to ignore any agreement, not least because the settler-colonial state by definition requires settlers if it is to expand across Palestinian land. Sheikh Jarrah stands as a contemporary example of colonial expansion by stealth, illustrating how Israel has updated its methods even as the international community regurgitates the same statements about peace and two states, regardless of Israel’s ongoing human rights violations. The Supreme Court’s language of compromise, after all, is what the international community has applied consistently to ensure the Palestinian people’s loss of land and rights, because the compromises are always expected of the colonised, never the colonisers.