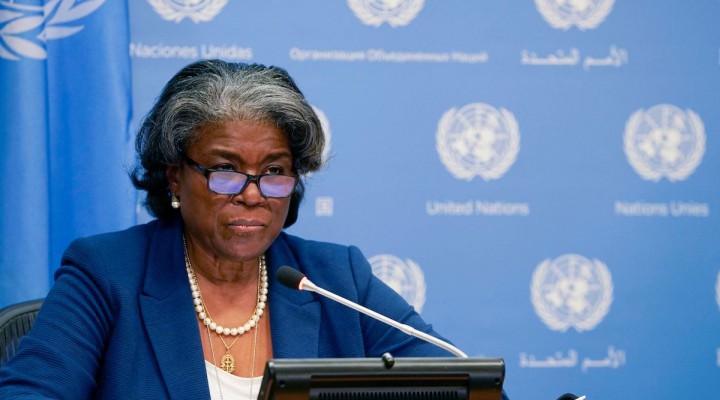 Israel seems to have acquired another formidably biased ally in the latest US Ambassador to the UN, Linda Thomas-Greenfield. Her Trump era predecessor Nikki Haley once said, “If there’s anything I have no patience for, it is bullies – and the UN was being such a bully to Israel because they could.” Thomas-Greenfield is going down the same route; less fiery language, perhaps, and more diplomatic tact, but subjugating Palestinians to Israel’s colonial violence nonetheless.

During a briefing to the UN Security Council this week, Thomas-Greenfield spoke about Palestinians’ security concerns while invalidating them in the same speech by upholding Israel’s security narrative.

Israeli settlers, she noted, are attacking Palestinians in the occupied West Bank, while settlement expansion is threatening the two-state paradigm. However, Israel has “real and understandable security concerns” about which the UN is not doing enough. That’s if the US narrative is to be believed which, of course, it shouldn’t.

Israelis “interpret the overwhelming focus on Israel in this body as a denial of Israel’s right to exist and an unfair focus on this one country – and they are correct,” Thomas-Greenfield declared. Only a few days ago, the UN Secretary General made sure that the International Day of Solidarity with the Palestinian People did not infringe on Israel’s colonial existence. So how can the US ambassador claim that the UN is denying Israel’s right to exist, when the two-state framework and the 1947 Partition Plan endorsed colonialism in Palestine and has protected it ever since?

The UN’s “unfair” focus on Israel is favourable to the settler-colonial enterprise. Its alleged unfairness has generated unrivalled impunity for Israel, while Palestinians have been begging for their political rights for decades to no avail. While Israel is recognised, endorsed and supported, Palestinians have lost so much territory that recognition of a Palestinian state renders no tangible benefits in terms of state-building. The “unfair focus” to which Thomas-Greenfield refers has allowed a colonial settlement project – with war crimes, as the International Criminal Court determined – to continue without any punitive measures, while Palestinians remain stuck in a perpetual cycle of dispossession. “Unfair focus” has also prioritised Israel’s existence over the Palestinian right of return, which the international community has long since written off as unfeasible and worthy only as a symbolic gesture, as opposed to a necessary political reckoning.

Thomas-Greenfield’s rhetoric takes the purported anti-Israel bias at the UN to a whole new level. The UN does not speak of decolonisation, let alone “a denial of Israel’s right to exist”, as she puts it. On the contrary, the UN affirmed Israel’s existence despite knowing that the creation of the settler-colonial state was based upon the ethnic cleansing of Palestinians from their own land.

In fact, so favourable is the UN’s focus on Israel, that Palestine is defined through Israel’s colonial requirements that will only consider complete annihilation of the land and its people as an acceptable end result. Hence the silence on Israel’s de-facto annexation of ever more Palestinian land, while issuing futile reprimands on settlement expansion and promoting dissociation between Israel’s violations of international law to avoid speaking of decolonisation. In light of all the pro-Israel bias at the UN, what else do the US and Israel expect from the international community?