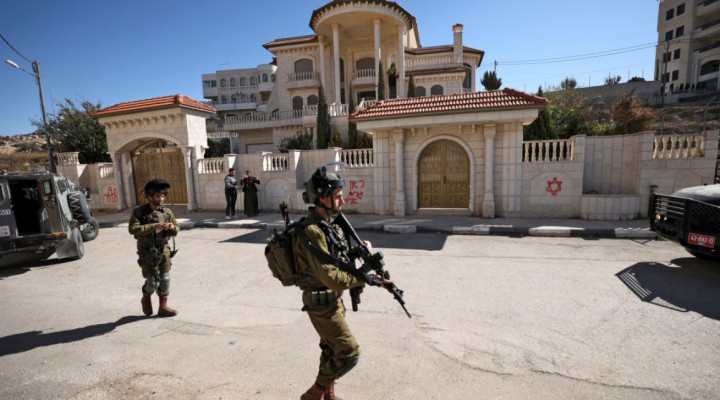 Israeli human rights organization B’Tselem released a report on settler violence this past October detailing the torture of a Palestinian teen. 15-year-old Tariq Zbeidi was beaten, bound with metal chains, pepper-sprayed, tied to a tree and had the soles of his feet burned by Israeli settlers. After losing consciousness, Zbeidi woke up in an Israeli military jeep and was subsequently threatened by an Israeli soldier with arrest if any stone-throwing happened in his village.

Zbeidi’s testimony is a small illustration of the grander cycle between Israeli settler violence and the impunity it is granted.

Crimes against Palestinians are regularly committed under the auspices of the Israeli colonial state and its military, and the settler-colonial population is clearly and inherently important to any planned expansion by the Israeli state.

While the more radical elements of Israel’s settler population are violent, settler violence in all its forms is a tool of dispossession. In that sense, what Israel could not achieve during the 1948 Nakba, it attempts to implement through various forms of violence at its disposal today, and that, in turn, is being normalised by the UN.

“Israeli settler violence is well documented. Yet knowledge about these atrocities alone is not helping Palestinians”

In April this year, the UN warned that settler violence was on the rise. “We are deeply worried by the atmosphere of impunity in which these attacks are taking place,” UN experts stated, without considering any punitive action against Israel.

Rather, the UN’s act towards accountability was to merely “call upon the Israeli military and police to investigate and prosecute these violent acts with vigour and resolve.”

Israeli settler violence is well documented. Yet knowledge about these atrocities alone is not helping Palestinians. At an international level, Israel’s narrative about its security has been fortified to the point that it is not being held accountable for its human rights violations – and meanwhile, the UN compiles data, releases statistics, issues press briefings about Israeli settler violence, yet usually treats them as isolated incidents.

For example, in 2014, in a gruesome revenge attack, Israeli settlers abducted and murdered Mohammad Abu Khdeir, a 16-year-old Palestinian. His autopsy report revealed that Abu Khdeir was burned alive.

In the end, Israel was unable to escape scrutiny after these attacks, and in 2020, Jewish settler Amiram Ben Uliel was sentenced to three life sentences, with the order to spend a minimum of 15 years in jail. This sentencing captured the media’s attention and deflected the narrative away from the fact that settler violence harms Palestinians on a daily basis and enjoys widespread impunity.

Nevertheless, the outcome of the arson attack on the Dawabsheh family is merely an exception, one in which Israel used to excuse other forms of violence that exist and are deeply rooted in a racist, violent culture underpinning Israel’s colonialism.

As Israeli settlers tend to have the Israeli military at their disposal, it stands to reason that Israel’s state policy is to protect settlers. Israel has been shown to encourage the use of violence among its settler population when it comes to Palestinians, and the only time settlers are reprimanded by the Israeli government is when their attacks are directed towards the Israeli army such as the recent incident when settlers attacked Israeli border police with stones when they arrived to dismantle a settlement outpost built in a closed military zone.

“Violence against soldiers is criminal behaviour, which requires a quick and vigorous response to bring the perpetrators to justice,” the Israeli military’s Chief of Staff Aviv Kohavi stated.

For the Israeli authorities, settler violence only constitutes violence if it is directed against Israel’s colonial institutions. Meanwhile, settler violence encroaches upon every aspect of Palestinian lives. The very presence of settlers is tantamount to the dispossession of the Palestinian people, and the settlers’ role entrenches the Israeli government’s apartheid system in the occupied West Bank, in addition to daily violence on Palestinians that range from violations of freedom of movement, destruction of Palestinian olive trees, and harassment on the street.

It is precisely because Palestinian rights groups report on such settler violence and other Israeli human rights violations that Israel designated them as “terrorists.” Israel seeks impunity, we seek accountability. The loudest noise right now is the world’s silence! https://t.co/rOHAoXMfr7

On a more significant level, the UN’s rhetorical expectations do not take into account the fact Israel’s very existence is tied to its settler population. Israel is a colonial project, and colonial projects depend upon settlers both in terms of their physical presence to justify further land grabs, as well as substitutes to the indigenous Palestinians.

If Israel is abdicating its responsibilities to protect the occupied population, as stipulated by international law, why then is the UN insisting that Israel holds itself accountable for a change in its policy? In other words, how does one ask a criminal to punish itself?

Indeed, the UN’s recognition of Israel as a state, rather than a colonial project, in 1948 has clearly impacted all types of international decision-making in terms of Palestinian rights,  and settler violence is part of this.

“In the end, settler violence profits Israel, and the international community profits from Israel, albeit at the price of maintaining Israel’s security narrative above international law”

In 2016, B’Tselem decided to cease referring documented cases of Israeli soldiers’ violence against Palestinians to the authorities. “There is no longer any point in pursuing justice and defending human rights by working with a system whose real function is measured by its ability to continue to successfully cover up unlawful acts and protect perpetrators,” B’Tselem explained in a statement about this decision.

If a human rights organisation within Israel can take such measures, what then is stopping the international community from acting against Israel for its impunity towards settler violence?

In the end, settler violence profits Israel, and the international community profits from Israel, albeit at the price of maintaining Israel’s security narrative above international law. If the UN honestly reexamined its steps in recognizing Israel’s inception, it will find a direct line connecting Israeli settler violence today to Palestinians’ point of an ongoing Nakba since 1948.

Yet, all the UN can muster is statistical data – it does so because, how else can this institution pretend to be protecting Palestinian rights while also bludgeoning them in the process?