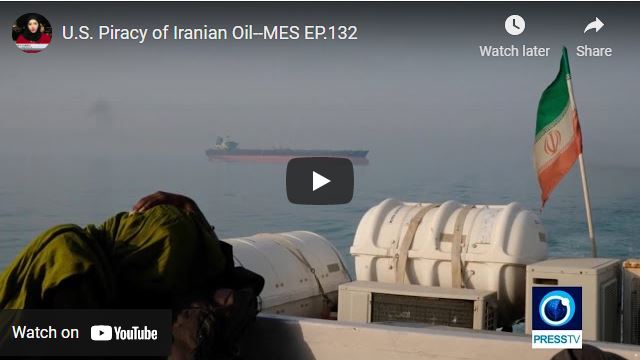 The United States continues to play pirates in the Persian Gulf waters, through an Iranian-American naval battle which occurred a few days ago in the Sea of Oman when American forces seized one of its oil tankers, before the IRGC Navy was able to recover it with an airdrop. While US officials have conveyed a completely different story from the Iranian one, saying that Tehran is the one who is holding a Vietnamese-flagged tanker, it seems that all doors are shut to the possibility of reducing tension between the two sides, especially with America brandishing alternative options, “perhaps military” they say forgetting who they are actually going up against. Pentagon first denied that this showdown took place, but were then hit hard when the IRGC has released video footage of the encounter. The footage focuses on Iranian movements to board and direct the ship’s course and omits the earlier attempts by US troops to seize the oil.

To discuss this issue with us from Tehran is Dr. Mohammad SultanNejad academic and researcher at Tehran University.

U.S. State Department notified Congress of a new $650 million arms sale to Saudi Arabia last week. The sale comes as the Biden administration continues to grapple with the US-Saudi relationship that has been strained in recent years following the murder of US-based journalist Jamal Khashoggi and Saudi Arabia’s involvement in its absurd war on Yemen. The sale will include 280 advanced medium-range air-to-air missiles, which the State Department said are used for air defense capabilities and cannot be used to attack ground targets.  U.S. lawmakers have criticized Riyadh for its involvement in the war on Yemen while the US is up to its neck in this conflict which is considered one of the world’s worst humanitarian disasters. These same US lawmakers have refused to approve many military sales for the kingdom without assurances that U.S. equipment would not be used to kill civilians. Well Yemeni cemeteries say otherwise, but when have US officials ever said the truth?

To discuss this issue with us from Washington is Dr. Ziad Hafez author and former secretary general of the Arab national conference.