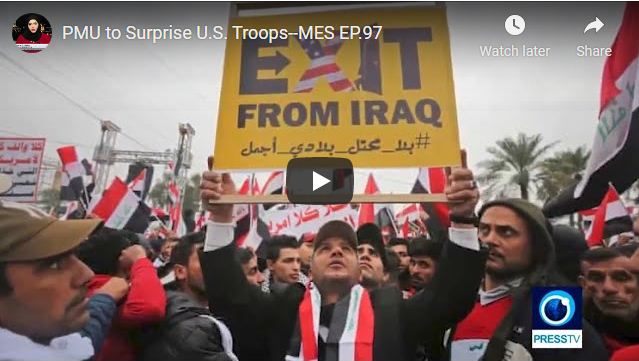 Hailing the recent attacks against the “U.S. occupation forces”, a statement by Iraq’s resistance PMU factions declared last week that “the resistance has the legal and national right and popular support to confront the occupiers until the liberation of Iraq, but will not target diplomatic missions.” The statement came a day after 10 Grad rockets struck the Ain al-Assad air base hosting American forces in the western Iraqi province of Anbar.

To discuss this issue with us from Beirut is Dr. Mohsen Salih, academic and political commentator.

In his very first papal visit to Iraq, Pope Francis spent four days in the crisis-stricken nation during which he traveled both north and south calling for “arms to be silenced and an end to acts of violence and extremism”. A landmark visit that saw the first closed-door meeting between the Pope and Iraqi Shia ayatollah Sayed Ali Sistani, whose Fatwa against Daesh changed the face of Iraq within 3 years, leading to the defeat of the terrorist group and making way for Iraq’s Christians to safely return to their homeland.

To discuss this issue with us from Beirut is Motaz Al Wehwah, political commentator.

Sistani sends messages after the Pope’s visit to the US and the Vatican, and Palestine

Debate: Attack on US forces in Iraq