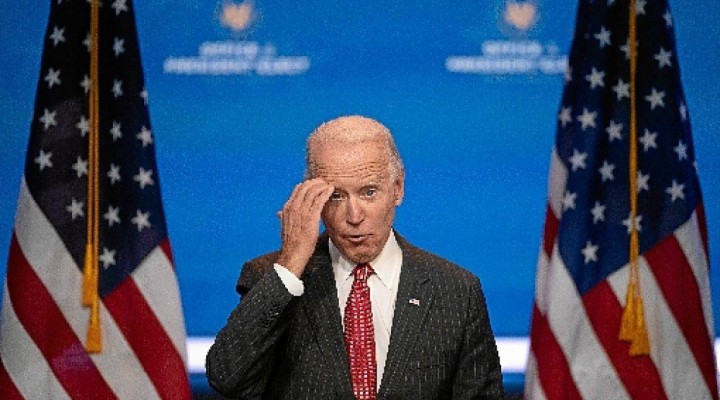 Just days after Israel launched a round of missile strikes against military targets near Damascus, American F- 15s were ordered into action in eastern Syria. The Pentagon said they targeted bases used by the Kataib Hezbollah group which it blamed for recent missile attacks on the US embassy compound in Baghdad and American military facilities at Erbil airport in northern Iraq.

Kataib Hezbollah denied carrying out any recent actions against American installations, and the US provided no evidence in support of its accusation. But even if the charge were true, Kataib Hezbollah is an Iraqi group, a mainstay of the state-backed Hashd ash-Shaabi (Popular Mobilisation), and it makes no secret of its allegiance to Iran. So why didn’t the US retaliate to its alleged attacks in Iraqi territory or even inside Iran?

The answer is threefold. First, President Joe Biden, who approved the airstrikes, does not want to embarrass the Iraqi government of US protege Mustafa Kadhimi. Second, he is trying not to provoke Iran while eagerly awaiting its response to the administration’s call for dialogue about its nuclear programme. Third, the US hopes to avoid retaliatory action against its embassy and bases in northern and western Iraq by either Iran or Iraqi groups.

Biden was not only an enthusiastic supporter of the US invasion of Iraq, but spearheaded calls for the country to be partitioned into separate ethno-sectarian states. He thought a united Iraq had the potential power to endanger the Zionist project in the region and strongly promoted pseudo-academic theories advocating its dismemberment.

The US military bases in Iraq are plainly illegal. The country’s elected parliament demanded their prompt closure in a legal and constitutional vote taken in January last year. The majority of Iraqis supported that decision, and many view missile attacks on these bases as a legitimate means of enforcing it.

The US government is in no position to question the credibility or legitimacy of the Iraqi parliament. The legislature is a product of the political process the US itself imposed after invading and occupying Iraq, and of military governor Paul Bremer’s constitution which established the basis for the sectarianism that now plagues the country. The US should have complied without hesitation with the parliament’s decision. But it simply ignored it. It seemed oblivious to the lessons of the occupation or the changes that have taken place on the ground since then.

Biden is making a big mistake if he thinks these airstrikes, which killed 22 Iraqis, can put pressure on Iran to come to the negotiating table to reach a new nuclear deal or ensure protection for US facilities in Iraq. They could have the exact opposite result and lead to further raids on American installations.

Syria cannot retaliate itself. It has been struggling for the past decade to preserve its territorial and demographic integrity against a US-Israeli scheme to break it apart like Iraq and Libya. It is in no position to confront the US superpower and its Israeli allies and Arab clients. President Bashar al-Asad said that openly after US forces occupied the territory east of the Euphrates where Syria’s oil and gas fields and strategic water and food reserves are located. But Asad intimated that other options were available, including the launching of an Arab resistance movement to force an eventual American withdrawal as happened in Iraq.

Syria does not stand alone. It is part of an ‘axis of resistance’ that has begun to assert itself as a regional power — with a network of paramilitary allies, an increasingly effective arsenal of home-made missiles and military materiel, a record of skilful crisis and conflict management and countering economic sanctions, and a burgeoning nuclear capability.

Syria’s ally Russia condemned the US airstrike and described it as a violation of international law, just as it does whenever the Israelis attack Syria. But condemnation is not enough. It needs to be accompanied by moves to enable the Syrian military to defend the country’s sovereignty. It makes no sense for S-400 air defence systems to be promoted worldwide but denied to near neighbours and allies Syria and Iran.

The unexpected and ill-considered US attack has disappointed those who were expecting Biden’s administration to be different to Trump’s with regard to the Middle East and specifically Iraq and the Gulf. Its move will only increase instability and tension in the region and could even drag into more unwanted wars.

The US targeted Syria in retaliation for attacks on its bases in Iraq. It should anticipate a response. Further attacks against its embassy or its many bases in Iraq cannot be ruled out. But it could also be setting the stage for a replay of 2007-2008 when Iraqi resistance to its forces was its height. If that sounds far-fetched, who in 2003 expected the occupation of Iraq to turn out the way it did? The US thought it would be easy and uncostly to invade a country that had been starved and suffocated by draconian sanctions for 13 years. But it ended up losing trillions of dollars and tens of thousands of killed or injured troops.

Biden’s first big Middle East blunder has come earlier and quicker than most of us expected.

This is what you voted for w/ Vanessa Beeley