HOME / WORLD / Sistani sends messages after the Pope’s visit to the US and the Vatican, and Palestine

Sistani sends messages after the Pope’s visit to the US and the Vatican, and Palestine 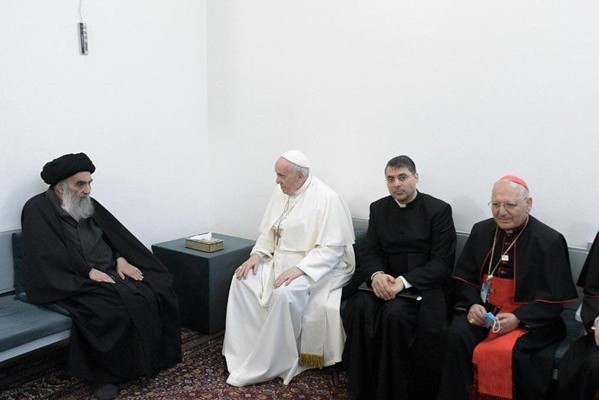 Two years ago, Pope Francis signed in Abu Dhabi, with the Imam of Al-Azhar, Ahmed Al-Tayeb,  a documentof “Human Fraternity for World Peace and Living Together”. His Holiness the Pope had wanted to sign a similar document with one of the most prominent Shiite community representatives globally, the Grand Ayatollah Sayyed Ali Al-Sistani, in Najaf. This did not happen for several reasons. How did the Iraqi authority view the Pope’s visit and the role of the representative of more than a billion Christian believers in the world? What would be Sayyed Sistani’s message for Pope Francis and the Arab, Islamic and Western worlds now?

There is no doubt that the Pope’s visit to Iraq is historical and essential in promoting dialogue and inter-faith relationships. It will undoubtedly leave positive effects, with its many religious, touristic, moral and political aspects, in a country where political differences are devastating. The battle against the takfiris and the US occupation forces has never ceased.

Former US President Donald Trump had travelled to the US military base in Ain Al-Assad in the western province of al-Anbar on board a “scary and pitch-black” plane with lights turned off for fear of being targeted. Pope Francis insisted on arranging the visit, notwithstanding the security challenges, to open up to the Muslim Shiites for the first time, just as the Vatican had opened up to the Sunnis. The Pope visited Baghdad, Najaf, Nasiriyah, Mosul, and the Kurdistan region – Iraq.

Pope Francis visited Iraq, the Abrahamic land where Noah’s Ark is believed to be docked, the centre of the gathering of Christians, Muslims, and Jews and the site of Prophet Abraham’s birth in the plain of Ur Nasiriyah. Iraq is the multi-national, multi-religious centre of civilisations extending back thousands of years.

His Holiness reached the places he has visited only due to the Popular Mobilization Forces’ sacrifices (PMF or Hashd al-Shaabi). When the Pope passed by a destroyed or free church, we can thank the fatwa of “al-Jihad al-Kifaei” issued by Sayyid al-Sistani in 2014 when “ISIS” occupied Mosul reached the gates of Baghdad. The Iraqi Shiites and the non-Shiite PMF (who represent 65 to 70 per cent of Iraqis, 20 per cent of whom are Sunnis,  the rest represent all other religions) saved Iraq from disintegration.

The Shia of Iraq are mainly concentrated in Baghdad and the oil-rich southern Iraq. Consequently, it is not surprising that more than 11,000 Shiites have been killed during the Jihad to liberate Iraq of ISIS. These were killed in the central area where ISIS was concentrated in Salahuddin and Nineveh’s northern provinces where the Sunnis, Chaldeans, Assyrians, Saiba, Yazidis, and others live, and in the Sunni province of Anbar.

The PMF has never been composed of Shiites only but is composed of Iraqis of all religions. The Western power and mainstream media demonised the PMF and changed its name into “Shiite militias affiliated with Iran.” There are many brigades, including the PMF of the “Council of Scholars of the Sacred Ribat of Muhammad” and the “Council for Combating Takfiri-Thinking” of the Sunnah Fallujah and Anbar. There was also the Christian Chaldean Brigade led by Rayan al-Kildani, who was present to welcome the Pope. Pope Francis offered the Christian commander a symbolic gift.

ISIS aimed to divide or occupy all of Iraq. It began in 2003 when Abu Musab al-Zarqawi blew up Sayyid Muhammad Baqir al-Hakim in front of Imam Ali bin Abi Talib’s shrine in Najaf. However, the Shiites did not retaliate due to Sayyed Sistani’s express wishes. Al-Zarqawi failed to trigger a Shiite-Sunni sectarian war. However, Zarqawi succeeded later in 2006 when the shrine of the Imams al-Askariyeen was destroyed in Samarra. In 2010, six suicide bombers attacked the Catholic Church of Deliverance in Baghdad and killed those at Mass. In 2014, ISIS destroyed the monastery of Mar Elijah, one of the oldest monasteries in Mosul. The terrorist group aimed to displace the Christians, whose numbers decreased from 2,400,000 to 320,000. The same happened in Syria, where the number of Christians represented 25 per cent of the original population in the twentieth century but today only represent 1.6 per cent.

The Pope wanted to send a message to the Middle East’s Christians, who are an integral part of the region, that they should cling to their land and look to their governments, not to western states. The Middle Eastern Christians are not part of the West, but they are the landowners of territory and should live with their problems and resolve their differences and struggles.

As for Sayyed Sistani, who received His Holiness the Pope in his house in Najaf with respect and appreciation, he was not satisfied with the lack of attention by the pontiff to the Shiites of Iraq, similar to what Sayyed Sistani did earlier. The Grand Ayatollah repeatedly expressed to the Christians of Iraq when they were exposed to the attacks of Takfiri: “You are part of us.”

Sources in Najaf said, “Sayyed Sistani refused to have his own photographer and did not want any Shia cleric, nor the directors of his office, to be present at Al-Rasoul Street, where he received His Holiness the Pope.” According to sources, the Vatican “did not issue any statement or take any overt position to recognise and support the Shiites who were killed while resisting ISIS and defending the Christians of Mesopotamia. Thus, Sayyid Sistani did not consider it necessary to issue a “joint document” as the Pope desired and was aiming for, and as he had done in Abu Dhabi when meeting with the Sheikh of Al-Azhar.”

According to sources in Najaf, the Grand Ayatollah grasped the opportunity of the Pope’s visit to send a clear message to all Iraqis and the leaders of the Middle East and the West. His communiqué contained an implicit message also to the Pope, and several “No (s)”:

1.     No To besieging populations: This is a position and a criticism against the US, which imposes sieges and sanctions on people with the aim to starve countries to bring them to their knees. Accordingly, Sayyed Sistani has defined his position rejecting US policy, putting an end to rumors that the Iraqis wanted the US to stay in Iraq despite the Parliament’s decision to seek to enforce the US’s departure.

2.     No to violence: this is a message that is also on its way – according to the source – to the US, which is killing and bombing the Iraqis. It is also directed towards the Iraqi government, which must respect Iraq’s people and avoid the recurrence of violence.

3.     No to injustice: A message for the Iraqi leaders, who ignore the injustices the Iraqi people have suffered from since Saddam Hussein’s rule continuing to the US occupation – said the sources – lack of services, job opportunities and administrative corruption. This message also aims to address the US forces, which treat the world with double standards, especially in the Middle East, where the Palestinian people suffer under the Israeli occupation, and the Syrian and Iranian peoples are oppressed by unjust sanctions.

4.     No to normalization with Israel: The sources said that Sayyed Sistani’s statement mentioned “displacement, wars, acts of violence, economic blockades, and the absence of social justice to which the Palestinian people are exposed, especially to the Palestinian people in the occupied territories.” This means that Iraq will not normalize with Israel, that the Palestinian cause is supported by Iraq and is the Iraqis’ concern. The message also speaks about how countries like Iran and Yemen are besieged by the US that apparently can only use “the language of war” (as the statement mentioned) to the detriment of any concern for social justice.

“Sayyed Sistani addressed his message to His Holiness when he said in his statement that great religious and spiritual leaders should limit tragedies” and mentioned the role of “these leaders with the great powers” (US) to prevail with reason and wisdom and to care for rights and mutual respect between the various followers of religious and intellectual tendencies. Here, Sayyed Sistani calls for a more effective role for the Vatican in supporting the Middle East, which suffers from the injustice created and amplified by the superpowers (the US and the West) and for which Najaf believes the Vatican is not doing enough. Sayyed Sistani – I learned – does not appreciate the fact that the Vatican was silent when the Shia lost thousands of men defending the Christians (and other Iraqis) and did not receive any attention or even an overt statement of recognition from the Pope for all these years.”

“The Grand Ayatollah mentioned his role in “protecting all those who suffered injustice and were harmed when the terrorists (ISIS) occupied vast Iraqi areas,” to tell the leader of the Christian Catholics around the world that he too is expected to play a similar vocal and dynamic role in the future”, said the source.

It is indeed a historic visit that allowed Sayyed Sistani to send out both an international and regional message in which he defined Iraq’s position in the Middle East, its future policy, and its rejection of the US’s role and policy in the world. The Grand Ayatollah left no room for doubt that Iraq will not be on the US’s side but will support stability in the Middle East and seek to prevent injustice against all its inhabitants, including Palestine.

Sistani sends messages after the Pope’s visit to the US and the Vatican, and Palestine.

0 thoughts on “Sistani sends messages after the Pope’s visit to the US and the Vatican, and Palestine”