HOME / Multimedia / LF Militia on The Loose in Beirut–MES EP.129 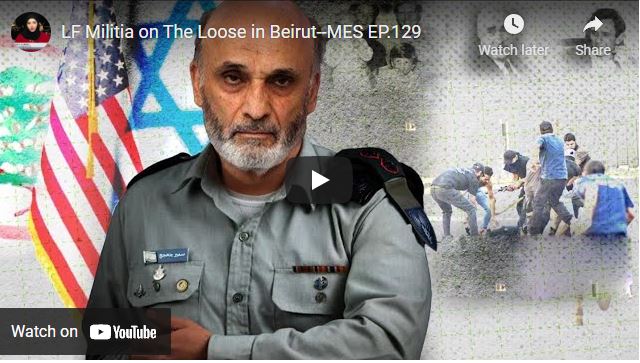 The years of imprisonment he deserved did not change him, and the experiences of political impotence and strategic failure did not teach him. He is still, despite the bleak outcomes of his entire destructive biography, attached to his instinct of bloodshed.

Samir Geagea, head of the Lebanese forces terrorist militia, has proved to be the longtime assassin whose belligerence knows no boundaries. Since his vile nature prevailed any form of sane human behavior, as soon as his prison gates were opened, he resumed his old habit of slaying. In the face of this instinctive reality, one can argue about Samir Geagea’s responsibility for Thursday’s massacre in Beirut. The Tayouneh massacre of October 14 of last week rekindles his old foul bets and renews the menace that once led him to prison. The bloodshed in Tayouneh was bleakly signed with this killer’s name, it drew his features all over the fallen bodies of innocent civilians whose only sin was to take part in an unarmed protest which Samir Geagea and his Lebanese Forces militias did not approve of..

To discuss this issue with us from Beirut is Dr. Ibrahim Mousawi, member of the Lebanese Parliament from the loyalty to the resistance bloc Hezbollah.

It is one of the country’s main parties who committed Tayouneh’s crime. It is Samir Geagea’s Lebanese Forces who did it. Hezbollah is now facing a true dilemma. It has to put an end to targeting his partisans in broad daylight without being dragged into the strife that Geagea and his instigators hope for. Sameer Geagea, the leader of the Lebanese Forces Party [LFP], and his party is known to be responsible for War crimes and mass murders during the Civil War in Lebanon. He was incarcerated for many years because he was convicted of committing two mass murders in churches, assassinating Tony Franjieh and his family in their bed one night, and killing ex-Lebanese Prime Minister Rashid Karami. Yet, Geagea was given a full pardon by the Lebanese Parliament in 2005. But not from the family victims

We continue with Dr. Ibrahim Mousawi, member of the Lebanese Parliament from the loyalty to the resistance bloc Hezbollah.

0 thoughts on “LF Militia on The Loose in Beirut–MES EP.129”