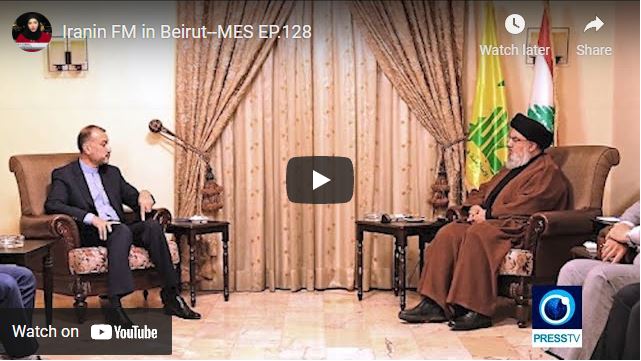 The Secretary-General of Hezbollah, His Eminence Sayyed Hassan Nasrallah, received the Minister of Foreign Affairs of the Islamic Republic, Dr. Hussein Amir Abdollahian, and his accompanying delegation, in the presence of the Ambassador of the Islamic Republic in Beirut, Mr. Muhammad Jalal Firuznia, where they reviewed the latest political conditions and developments in Lebanon and the region.

Iran’s Minister of Foreign Affairs emphasized the constants of the Iranian position towards supporting Lebanon.

Sayyed Nasrallah thanked the visiting delegation for the Islamic Republic of Iran’s support for Lebanon, state, people and resistance during all the past decades proving that it is the sincere ally and loyal friend who does not fail its friends no matter how difficult the circumstances are, and that hopes are very high for Lebanon to emerge from this ordeal that befell it.

To discuss this issue with us from Beirut is Mr. Mohamad Obeid, political Commentator.

Lebanon’s two main power plants were forced to shut down after running out of fuel, the state electricity company said Saturday, leaving the small country with no government-produced power. Lebanon is grappling with a crippling energy crisis made worse by its dependency on fuel imports. Erratic power supplies have put hospitals and essential services in crisis mode. The Lebanese increasingly depend on private operators that also struggle to secure supplies amid an unprecedented crash of the national currency. The shortage of diesel and fuel, along with an antiquated infrastructure, has worsened power cuts that have been a fixture for years. Blackouts that used to last for three to six hours could now leave entire areas with no more than two hours of state power a day.

We discuss this issue with us from Beirut is Dr. Mkhail Awad academic, author and political commentator.