HOME / Multimedia / Marwa Osman for RT America: “It was not a Clash. It was an Ambush.” 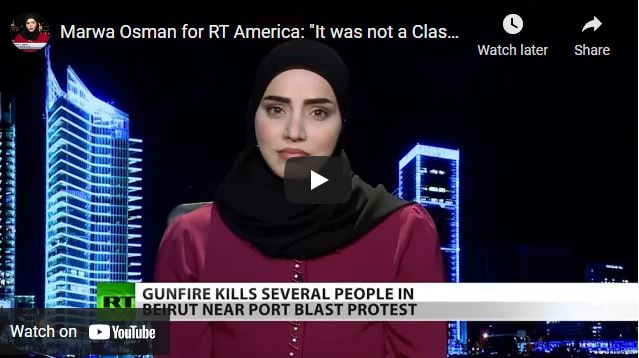 My interview with RT America just a few hours after the terrorist attack in Beirut’s Tayyouneh area where several snipers killed 6 unarmed protester and one Mother of 5 inside her own house on Thursday October 14.

All fingers point to one Samir Geagea’s Lenabese Forces (Ouwet) militias who apparently prepared for this attack days earlier.

Supporters of Hezbollah and Amal Moverment and Marada were taking to the streets to denounce the politicization of the Beirut Port Explosion by pro-US judge Tarek Bitar when they were met with sniper fire from the buildings nearby the Palace of Justice.

Investigations are still underway as Security sources for the Lebanese Al-Manar TV said that 19 people were arrested on Friday Oct.15 in connection with the Tayouneh ambush: 17 Lebanese and two Syrians, including George Touma and his two sons who stalled in their Toyota 4×4 truck and shot from a close range at the protesters.

Stay tuned on Tuesday on my Show the MidEaStream which airs on Press TV for more details about the “Tayyouneh Terrorist Attack”.

0 thoughts on “Marwa Osman for RT America: “It was not a Clash. It was an Ambush.””