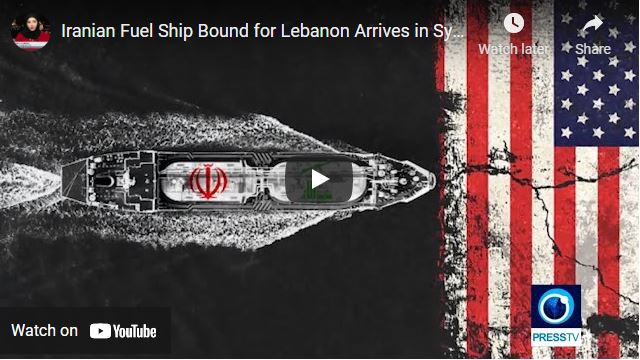 The Iranian ship loaded with fuel, which Hezbollah Secretary General Sayyed Hassan Nasrallah announced on the 10th day of Muharram that it set off from Iran, and that its final cargo destination will be Lebanon, entered Syrian territorial waters last week. According to AL Akhbar daily, the cargo of the ship will be transported by tankers from Syria to Lebanon, after unloading it at a Syrian port in Banias. Al Akhbar newspaper also stated that part of the ship’s cargo will be donated by Hezbollah to government hospitals and care homes. Experts believe this move will increase Hezbollah’s popularity both inside and outside Lebanon for taking the initiative to save the Lebanese people from hardships while also defending the country’s sovereignty and dignity.

To discuss this issue with us from Beirut is Dr. Tim Anderson academic, author and general coordinator of the Global Gathering In Support Of The Choice Of Resistance in Australia.

In a statement before leaving the Lebanese capital, Beirut, the Democratic Senator in the US Congress, Richard Blumenthal, considered that “Hezbollah is a rampant cancer that must be eradicated” only because the resistance decided to ask its allies for help to rid Lebanon from the fuel crisis. Yes, a foreign member of congress of a country 10,000 Km away from my country had the audacity not only to comment on Lebanese internal affairs, but also made sure to attack the largest and most powerful political bloc and resistance faction in the region.  In a statement from Beirut International Airport, Blumenthal then stressed that “Lebanon should not rely on Iran to solve its crises, especially via the fuel ship,” stressing that the US administration is “actively working” to solve the fuel crisis. Yeah sure! Iranian fuel ships bound for Lebanon exposes US role in fuel crisis in this following report.

We continue with us from Beirut is Dr. Tim Anderson academic, author and general coordinator of the Global Gathering In Support Of The Choice Of Resistance in Australia.