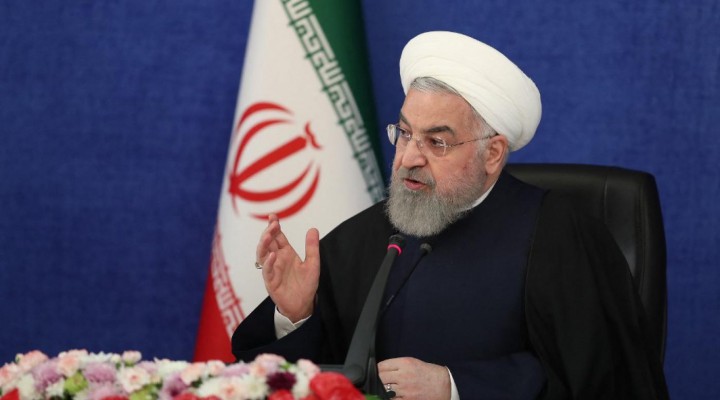 Facing international double standards, Iran will be cautious about rejoining the agreement after the US broke it with impunity

Non-proliferation of weapons of mass destruction has always been a benchmark for the stability of a highly volatile region such as the Middle East. The 1980-88 Iran-Iraq War and the ongoing Syrian war have offered chilling reminders about the consequences of their use.

Nuclear weapons understandably get the most attention. In such a framework, the international community’s counterproliferation efforts should have prioritised those countries in the region that did not sign the landmark 1968 nuclear Non-Proliferation Treaty (NPT) and skipped monitoring by the International Atomic Energy Agency (IAEA). Israel, having never signed the NPT and being the only Middle Eastern nation to unofficially develop a military nuclear programme, should have been closely monitored.

Not a chance. For historical reasons and others somewhat related to US foreign policy, Israel’s nuclear programme has always been a taboo for the international community, and it remains so to this day.

Meanwhile, this has been “compensated” for by an international mobilisation against the nuclear programme of Iran – a state that signed the NPT and voluntarily implemented its Additional Protocol, enabling unannounced and intrusive inspections to monitor compliance.

While this is called realpolitik, to many, it sounds like double standards. The last six years of Iran’s nuclear saga are well known. Although the status of Iran’s nuclear programme has not always been crystal clear, by signing the 2015 nuclear deal with world powers, Tehran finally accepted limits on its programme in exchange for an end to international sanctions.

While Iran complied with the deal, duly certified by the IAEA, sanctions relief never fully materialised – and in May 2018, the US withdrew from the agreement and adopted new, unprecedentedly harsh sanctions against Iran.

The UK, France, Germany and the EU tried to keep the deal on track – but ultimately, to avoid US wrath and damaging secondary sanctions, they abstained from economic activity with Iran, maintaining the sanctions de facto and further damaging Iran’s economy and trust.

Less than three years later, and while US President Joe Biden has announced his intention to re-enter the nuclear deal, a new narrative about the nature of the Iranian threat is being advanced by the US and Israel, echoed in some European chancelleries. The nuclear deal is being deemed obsolete and in need of renegotiation, mainly because it does not address two important issues: Iran’s ballistic-missile programme and its “malign and destabilising activities” in the region.

As to the first objection, ballistic missiles were never part of the nuclear deal’s core business – and incidentally, they were already deployed across the region, not just in Iran, when the deal was negotiated and signed.

By advocating the inclusion of Iran’s ballistic missiles in a new agreement, they fail to explain how it has been possible for Iran to significantly improve its missiles and make them so much more threatening in just a few years, while it was subjected to the most punishing sanctions regime ever conceived. Their focus on the missiles is a massive indictment of their own sanctions’ effectiveness.

The US and European silence on such a contradictory and embarrassing stance might be understandable; much less so the deafening one maintained by western media.

As to Iran’s alleged “malign and destabilising activities” in the region, the Holy Gospel may be useful: “Let he who is without sin cast the first stone.” Assessing the recent history of the Middle East, Iran is certainly not alone in this endeavour.

Putting temporarily aside the mother of all regional destabilising activities, the US invasion of Iraq in 2003, is it sound to assume that Iran will accept putting its conduct under negotiation, while its regional rivals remain free to continue business as usual, often aimed at damaging its own interests?

Again, it is called realpolitik, but it sounds to many like double standards.

Sometimes, to solve a problem, it is useful to assess it through the opponent’s eyes. Iran, after having constrained its nuclear programme in 2015, did not get the full sanctions relief to which it was entitled. In spite of this, it continued to comply with the deal. In 2018, it was subject to even harsher US sanctions, but it was not until a full year later that it began reducing its own compliance with the deal, in accordance with clauses that contemplated such an eventuality. It was immediately accused of breaching the deal, while a similar accusation was not levelled against the US.

Trust at an all-time low

Now, Iran is also being blamed for alleged loopholes for having conducted activities that were never contemplated by the nuclear deal. In other words, from Tehran’s viewpoint, in addition to the damage it has incurred, there is now mockery as well.

It is not surprising that Iran’s trust towards its western partners in the nuclear deal has reached an historic low, nor should it be surprising that Tehran would lay out specific conditions before joining any new negotiations – first and foremost, sanctions relief. Fool me once, shame on you; fool me twice, shame on me.

It is a typical specular situation: Iran has been accused of cheating, while its leadership feels they have been cheated.

Although the Biden administration has asserted its commitment to re-enter the nuclear deal, it might not have properly assessed how complex and internally costly this could be, especially with a highly polarised Congress and nervous regional allies. This might explain why, so far, Washington has sent mixed signals to the Iranian leadership, while the country is entering an electoral campaign for its presidential vote and the window of opportunity for a breakthrough is narrowing.

This may not be the best approach with an already highly suspicious and disappointed Iranian leadership. On one hand, the White House is pretending that Iran must return to nuclear compliance first; on the other, by ending support for the Saudi war in Yemen and reviewing weapons sales to some of its Arab allies, is the US not suggesting that there are other destabilising actors in the region? Time will tell.

Iranian funds frozen in Iraq, South Korea and Oman have recently been released, but Tehran might not consider this enough to qualify as sanctions relief. Regardless of how many synchronisation mechanisms, pathways or road maps are conceived to get both the US and Iran back into compliance with the nuclear deal, what Tehran is really searching for is an end to its status as an international and regional pariah.

At the same time, it will not likely accept a path to this goal that is built on double standards – especially since any fair assessment of the last four decades shows that singling out Iran as the only source of regional destabilisation is inaccurate or exaggerated. Other global and local players bear similar responsibilities, but have not been held accountable so far.

It is from such a simple acknowledgement that any serious effort to de-escalate tensions in the area should start, possibly taking into account new visions for the future.