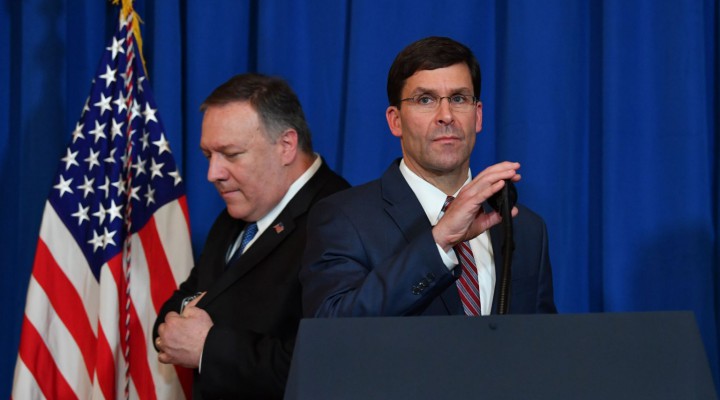 While the global economy plunges into a recession, actively aided by the coronavirus pandemic, the US is already hatching plans not just for its own recovery, but also the removal of geopolitical rivals like Russia and China. The expectation is probably that many countries will have been weakened by the current crisis. Opponents will be unable to adequately resist, and partners and neutral parties will be forced to take the position dictated to them by Washington. Therefore, to catch everyone off guard, appropriate action strategies must be prepared.

Revenge is being planned on several fronts at once, one of which is the global energy sector. While oil prices fluctuate, the US has decided to reshape the nuclear energy market. In “Restoring America’s Competitive Nuclear Energy Advantage. A Strategy to Assure US National Security”, a report recently published by the US Department of Energy, it states that “the U.S. Government will move into markets currently dominated by Russian and Chinese State Owned Enterprises (SOE) and recover our position as the world leader in exporting best-in-class nuclear energy technology, and with it, strong non-proliferation standards. We will restore American nuclear credibility and demonstrate American commitment to competing in contested markets and repositioning America as the responsible nuclear energy partner of choice.” It notes that the related cost estimates for “concrete actions” have been included in the budget for 2021. Consequently, this is the year that the US will begin active measures against Russia and China. US Congress will support the Department of Energy, which can be understood as the possible imposition of sanctions against core enterprises. It is interesting that, in reference to Russia, the report says the country has “weaponized” its energy supply as an “instrument of coercion” and “dominates nuclear markets”.

Generally speaking, this refers to the production and supply of nuclear reactors, the sale of nuclear fuel to others countries, and access to uranium. In addition, the report pushes the concept of non-proliferation and nuclear safety, which actually means US meddling under the guise of inspections. Ironically, the International Atomic Energy Agency (IAEA) does not get a single mention in the report, although there is room for the interests of the US Defense Department. It states: “The U.S. has well-defined defense needs that also depend on a healthy nuclear fuel cycle in the long-term. There are currently two defense needs for uranium: low-enriched uranium is needed to produce tritium required for nuclear weapons, and highly- enriched uranium is used to fuel Navy nuclear reactors.”

The aim is to introduce protectionist measures for the US market with regard to Russian nuclear energy supplies, and also work more closely with Russian clients in the foreign market.

At the same time, one can conclude from various US sources that there will be competition for the Arctic. On 23 April, Danish and US officials announced a $12 million financial and diplomatic package for Greenland to “open a consulate on the island in a bid to strengthen mutual ties and counter growing Russian and Chinese interests in the Arctic.”

US media outlets are also expressing concern that Russia is going to build new nuclear icebreakers that could be used to service the Northern Sea Route, including in the interests of China. In contrast, the US itself has only two icebreakers, both built in the 1970s. And of the six breakers planned for the Coast Guard, only two have funding and will not be ready until 2024.

For the Arctic latitudes, the US military is also testing drones and land-based robots. They were used as part of the Arctic Edge 2020 exercise held in Alaska in February. Again, the press release mentions hypothetical friction in the region and, when it comes to the US, this could only be with Russia.

The US has also been paying more attention to the Pacific and Indian oceans owing to China’s activities in the region.

Two years ago, at a Senate Armed Services Committee confirmation hearing, Admiral Philip Davidson said he will work to increase military presence on China’s borders. Now, this reorganisation of US forces is starting to take shape.

In early April, a specialist US publication reported that cyber operators with the 31st Marine Expeditionary Unit had been deployed for the first time with the USS America in the Pacific. Their goal is to establish a working method for future teams dealing with cybersecurity issues. The contingent of cyber operators was deployed to the 7th US Fleet immediately after Exercise Cobra Gold 2020 in Thailand, which also involved military units from Japan, Malaysia, Indonesia, and Singapore.

In addition, the US Indo-Pacific Command has announced it needs an investment of $20 billion, and the request has already been submitted to Congress. The Pentagon is thinking of establishing a special fund that will be a Pacific version of the European Containment Initiative developed exclusively against Russia. The Pacific Deterrence Initiative would be focussed on dealing with China.

False news stories have also started circulating that China has been testing low-yield nuclear weapons, which could suggest a violation of nuclear test limitation agreements.

The US has no visible evidence, however. In May 2019, similar statements were made with regard to Russia. Chances are that the next step will be activities related to the US nuclear arsenal.

Russia has also been accused of testing an anti-satellite missile. The commander of US Space Command, General John Raymond, stated that “[t]he United States is ready and committed to deterring aggression and defending the nation, our allies, and U.S. interests from hostile acts in space,” while the testing of launch vehicles was proof of “Russia’s hypocritical advocacy of outer space arms control proposals”. There has been no official statement from Russia that it actually was an “anti-satellite missile”, however. It is merely speculation by the US military and the media.

What is not speculation, however, is that the US Space Force is starting to deploy a system that jams foreign satellites, and it is Russian satellites that are mentioned. Not only will a network of ground-based radio-electronic jamming stations be set up in the next few years, but dozens of new military satellites will be launched into orbit.

And finally, the White House announced in early April that it is going to double the number of US military personnel in the Caribbean. This relates to the US Navy, reconnaissance aircraft, US Air Force attack helicopters, and Coast Guard cutters. The US Secretary of Defense referred to the expansion of operations against drug cartels operating in Colombia, but the announcement was perceived as political pressure on Venezuela.

Combining these disparate but interrelated facts into a single picture, we can see that America’s global appetite is not diminishing, but rather, under the guise of threats from Russia and China, both the Pentagon and the US State Department are working together to preserve and strengthen the country’s geopolitical dominance.

0 thoughts on “The Hegemon Won’t Leave”