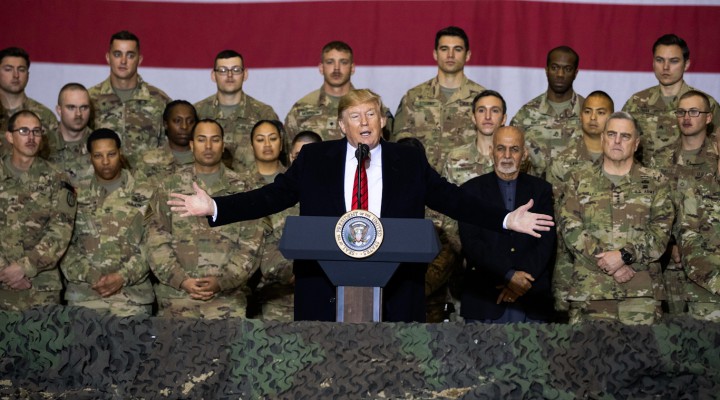 While much of the corporate press has blamed Russia and China for the sudden failure of multiple longstanding nuclear treaties, experts put the blame on squarely on the Trump administration.

MPN– After pulling out of multiple international treaties designed to limit the global threat of atomic weapons, the Trump administration is now strongly indicating that it will also let the New Strategic Arms Reduction Treaty (START) expire in February 2021. START is commonly described as “the last remaining arms control agreement constraining the arsenals of the two major nuclear weapons powers,” the United States and Russia.

While the Trump administration’s actions have been largely overlooked in corporate media, they are causing panic among diplomats and specialists in the area. On Wednesday, the U.S. foreign policy journal Foreign Affairs published an extraordinary article from the two diplomats who led the American and Russian negotiating teams that extended the START treaty in 2010. Rose Gottemoeller, the American ex-Deputy Secretary-General of NATO and Anatoly Antonov, former Deputy Foreign Minister of Russia, wrote that Trump’s recklessness should be a wakeup call to the planet and is “a chilling sign of how dangerous the world has become.” The two warned that, without a binding treaty, the nuclear arms race will immediately recommence, and Armageddon will not be far away.

While much of the corporate press pins the blame squarely on Moscow or Beijing for the diplomatic failure, both chief negotiators are adamant that there is only one barrier to a safer world, and he resides in the White House. “Russian President Vladimir Putin has indicated that the Russian side is ready to extend New START without any preconditions. There is nothing stopping U.S. President Donald Trump from immediately announcing the same,” they wrote.

Gottemoeller and Antonov describe the fast expiring New Start treaty as “the sole [remaining] legal instrument that keeps a new strategic nuclear arms race at bay.” Last February, Trump unilaterally withdrew from the Intermediate Range Nuclear Forces (INF) treaty, stating that he would “move forward with developing our own military response options.” Earlier that week the United States had received the first batch of low-yield nuclear warheads the president had previously ordered. Experts agree that these so-called mini nukes are far more likely to be used in battle and blur the lines between a conventional and nuclear conflict, making an all out example of the latter far more likely.

The Trump administration also recently pulled out of the Open Skies treaty, an agreement that allowed the world’s major players to freely observe each other from the air, increasing knowledge and understanding of everyone’s capabilities.

In January, Trump directly threatened Iran with genocide, a key advisor of his, Sheldon Adelson, long pushing Washington to drop a nuclear bomb on a less inhabited area of the Islamic Republic as a powerplay. The U.S. remains the only country to use an atom bomb during war, doing so against Japan twice in 1945. It also used depleted uranium shells in Iraq, Afghanistan, and Yugoslavia, causing spikes in cancer rates and birth defects.

Washington’s ire, however, has moved away from the Middle East and is pointed squarely at China and Russia, as the new Pentagon budget for 2021 makes clear. The Pentagon is looking to spend some $705 billion on opposing the two states, including funding for, in its own words, “more advanced high-end weapon systems, which provide increased standoff, enhanced lethality and autonomous targeting for employment against near-peer threats in a more contested environment.”

In January, the Bulletin of Atomic Scientists moved their famous “Doomsday Clock” – a measure of how close we are to the end of the world, to 100 seconds to midnight, the most dangerous moment in human history, citing the “dangerous rivalry and hostility among the superpowers increases the likelihood of nuclear blunder.” The fact that world experts believe that we are closer to annihilation than even during the Cuban Missile Crisis gained only moderate public attention.

In his newest book, The Doomsday Machine: Confessions of a Nuclear War Planner, Daniel Ellsberg noted that 50 years ago his team calculated that, in the event of a perfectly executed U.S. nuclear attack on the U.S.S.R., with zero Soviet retaliation whatsoever, around 99.9 percent of the American population would likely die from the vast amounts of smoke generated from the fires over Russia that would eventually engulf the entire planet. Ellsberg now believes that 99.9 percent was an underestimate because the concept of nuclear winter was not fully understood at the time.

Gottemoeller and Antonov ended their article with a plea to the United States to come to its senses: “The novel coronavirus pandemic should serve as a powerful reminder of the fragility of the international system. This is exactly the wrong moment to undermine or weaken other key components of that system, especially in the nuclear realm,” they wrote, “Now more than ever, it is essential to ensure that a nuclear war that cannot be won will never be fought.”

The Irresponsibility of Small Nations