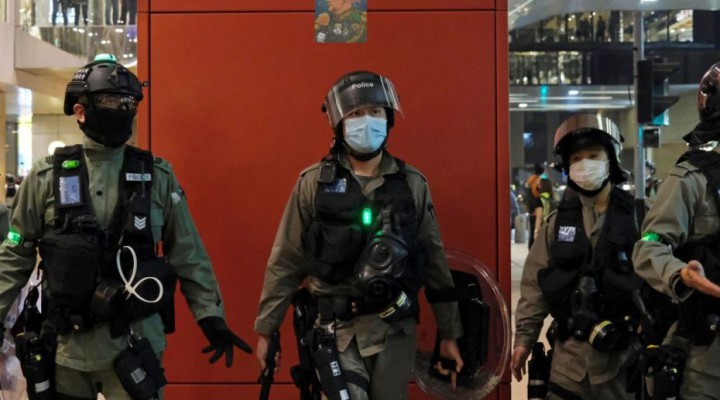 How can Doctor Bleach Trump get his head around this scientific evidence when he thinks you can cure the disease by mainlining with Clorox?

Trump’s foray into Covid-19 disease treatment – proposing household bleach as a possible cure – really shows how idiotic this president is. His subsequent, quick damage-limitation attempt to disown the reckless remarks as “sarcasm” only show how dishonest and mercurial he is.

Seriously, if the tycoon-turned-president can contemplate injecting disinfectant into the human body as a way of “cleaning” a virus, then you know this guy has a primitive grasp of scientific knowledge.

We know already Trump is notoriously contemptuous of scientists and technical experts. He prefers gut instinct and penchant for “quick-fixes” which derives from his vulgar capitalistic worldview of keeping costs rock-bottom low and profits sky-high. His dismissal of climate science and the initial outbreak of the Covid-19 pandemic as “hoaxes” exemplify the anti-science bigotry.

Surrounded by fundamentalist Christian cultists like Mike Pompeo and Mike Pence, who believe in biblical creationism over evolution and apocalypse over historical progress, is also consistent with the anti-scientific parochialism of Trump and his administration.

So, now we see why such obtuse people can believe and proselytize the absolutely unscientific conspiracy-garbage story claiming that the Covid-19 virus came out of a Chinese laboratory, either by accident or maliciously as a bioweapon.

Trump and Pompeo are pushing this libelous nonsense as part of their “blame China” agenda. Rabid anti-China hawks like Fox news pundit Steve Bannon, as well as Senators like Tom Cotton and Lyndsey Graham, have added grist to this rumor mill by demanding massive financial compensation from Beijing. Supposedly respectable media outlets like the Washington Post have also propagated the notion that the pandemic originated from a virology laboratory in China’s Wuhan city. From there, so the argument goes, it spread all around the world and specifically wreaked death and economic havoc in the US. The logic of this argument could lead to war with China.

An added sinister twist to this narrative is that the Chinese government lied about the initial outbreak in December and conducted a cover-up, which disarmed the US and other Western states from preparing adequate public health defenses. America’s top diplomat Mike Pompeo has reiterated provocative claims that China covered up.

The notion that China delayed or deceived on information is contradicted by the factual timeline of the pandemic. The Chinese authorities and the World Health Organization were issuing emergency declarations by the end of January – less than four weeks after the first detection of the disease in Wuhan. The disease up to then was unknown. China’s response can therefore be seen as laudably swift. Chinese geneticists had also by then sequenced the virus’ genome and published it for the rest of the world to begin the challenge of engineering diagnostic tests and eventually a vaccine.

Trump is on record for earlier (March 27 and other dates) praising China’s efforts at managing the pandemic crisis, while also back then playing down the danger it posed to the US.

The sudden shift in recent weeks to blaming China is simply the Trump administration trying to find a scapegoat to cover for its own criminal complacency in protecting the US public from the disease. The US death toll is by far the worst in the world and its economy lies in ruins. The complacency stemmed from American “exceptionalist” arrogance and the anti-science bigotry of Trump and his acolytes.

The claim that the Covid-19 virus (also termed SARS-CoV-2) was “leaked out” of a Chinese lab totally fits into demagogic attempts to inculpate China. It whips up anti-Chinese racism, xenophobia and a false nationalistic jingoism. “China Lied, People Died,” goes the slogan touted by pro-Trump supporters. The nasty logic therein is: if it weren’t for those dirty, sneaky Chinese, we’d be all eating apple pie and sucking up a roaring economy.

The trouble is there is zero scientific evidence to support this conspiracy. Indeed, scientists, virologists, geneticists, molecular biologists from all around the world, including top American experts in their fields, have denounced the claim that the Covid-19 virus came out of a laboratory or was manipulated by genetic engineering.

This article by Alex Lantier is well worth reading for its summary of international scientific assessment concerning the origins of the Covid-19 virus. The predominant scientific conclusion, as published in peer-reviewed academic journals such as Nature, is in full support of the World Health Organization’s determination that the virus originated in nature as part of normal natural selection, and was thereby passed on to humans. The key to this conclusion is down to mapping the genetic material in the virus which proves its natural origin, most likely via bats to humans as the zoonotic vector. If it were manipulated in a lab then the genetic composition would betray a synthetic technique of “splicing”.

The Wuhan Institute of Virology is an internationally respected laboratory dedicated to studying viral diseases and how to protect public health from inevitable dangers of transmission. It is designated a P4 biosecurity establishment which means it operates at the highest safety standards. This impeccable standard is vouched for by Western scientists who have worked at the Wuhan institute. So, the idea that a “natural virus” could have somehow “leaked out” by accident is illogical and implausible. Such credulous kind of thinking relies on a certain anti-Chinese prejudice.

The science of virology and molecular genetics is amazingly complicated. But the bottom line is that it proves the origin of Covid-19 virus as a naturally occurring development. That conclusion vindicates what the Chinese government and the WHO have been saying. It destroys the toxic narrative being promoted by Trump and his band of anti-China, anti-scientific zealots.

But how can Doctor Bleach Trump get his head around this scientific evidence when he thinks you can cure the disease by mainlining with Clorox?