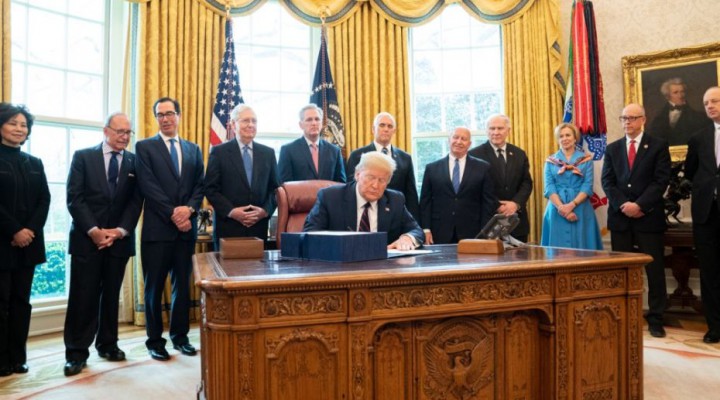 China and the renowned stoicism of its leaders are not going to sit idly by as Washington dips into their sovereign coffers and begins looting trillions of dollars out of some deluded sense of victimhood.

It’s a grim number. This week sees the United States’ death toll from the Covid-19 pandemic exceeding the total number of American troops that were killed during the decade-long Vietnam War – some 58,000.

In a matter of just a few weeks, U.S. deaths from the disease make that nation the world’s leader, in a macabre way not imagined by preening “American exceptionalism”.

But never mind, Americans can take heart that they have got Donald Trump as their leader. (That’s genuine sarcasm unlike Trump’s brand of fake retro-sarcasm.)

He has described himself as a “wartime president” heroically fighting “a war against an invisible enemy”. His daily press briefings to the nation beamed from the White House have become an exercise in boasting, hyperbole and unctuous self-congratulation.

However, Trump’s bravura predictions of defeating the Covid-19 virus and a rocketing recovery really don’t inspire confidence. This is from the same “stable genius” who not so long ago dismissed the pandemic as a hoax which would pass America “like a miracle”. Just like his prescription for injecting bleach as a cure – later denied as “sarcasm” – Trump’s credibility should carry a graphic health warning.

The irony of Trump’s flip from “virus hoax” to proclaiming himself to be a “wartime president” in combating the pandemic is that the real estate heir never saw a real war in his life. Or to be more precise, used his old man’s wealth to pull strings in order to avoid the draft for the Vietnam War. Trump would even brag about his partying days during the 70s – and his non-existent medical condition of “heel spurs” – while tens of thousands of working-class Americans were getting cut to pieces in the jungles of Southeast Asia.

Trump’s ineligibility to lead the U.S. in any sort of war is manifest in the abysmal impact on American lives and society from the Covid-19 pandemic. The singular devastation wrought on the U.S. from the disease is ultimately the responsibility of the so-called Commander-in-Chief. The lack of public health defenses, the cavalier complacency, the arrogant indifference during a crucial two-month warning period, the hollowing out of disease control infrastructure – are all attributable to this president’s watch.

But just like the Vietnam War era, Trump’s cowardice and cynicism is on full display for those able to discern. The megalomaniac narcissist is not going to take the rap for the disaster. His administration and its Fox News-aligned foreign policy is lining up China to take the heat.

Trump once boasted that he doesn’t let adversaries know what his game plan is. That’s laughable. It’s easy to read Trump. Just watch Fox and its rabid anchors and pundits. China and the “Chinese Communist Party” are the “evil of our time”, informs the Murdoch-owned outlet. China has to be sued for trillions of dollars for deaths and damages inflicted on America. Pundits are advising an easy way to collect. Just don’t honor the U.S. foreign debt held by China.

Earlier this week, Trump signaled he was firming up his “get China” game plan in accordance with his Fox briefers. Trump has gone from “looking into” Beijing being possibly liable for the outbreak of Covid-19 to now openly accusing China of “not protecting us”.

“We are not happy with China,” the president told the press in recriminatory tone. He said there were “a lot of ways” to hold China accountable. “We’ll let you know at the appropriate time.”

A quick switch over to Fox News to see where this policy is going and pundits like Senator Lyndsey Graham are proposing economic sanctions and freezing of Chinese assets “until they learn how to behave”. One can anticipate Trump soon using the same language of unilateral punishment of Beijing for allegedly destroying the U.S.

In the Rose Garden briefing Monday, Trump’s fury towards China was palpable.

“I built the greatest economy in the history of the world,” said the president. Leave aside Trump’s vulgar immodesty and ridiculous self-congratulation, the point is that Trump and his cohorts deludedly think that their wonderful American paradise was sabotaged by China, which, he warns, has to be “held accountable” for spreading the disease.

Never mind a woman scorned, hell hath no fury like a megalomaniac whose vanity and presumed glory have been sullied.

Trump is going to blame China for every perceived problem stemming from the Covid-19 pandemic. We can expect to see unilateral measures like expropriating Chinese-owned U.S. treasury bonds and other investments by way of self-declared “compensation” for American losses. This is going to get very nasty. The earlier U.S. trade war antagonism with China is going to look like a picnic by comparison.

China and the renowned stoicism of its leaders are not going to sit idly by as Washington dips into their sovereign coffers and begins looting trillions of dollars out of some deluded sense of victimhood. Especially when China already knows that it is most likely the victim here of American scapegoating over Covid-19. In short, draft-dodger Trump and his Fox News armchair generals are charting a course towards war.