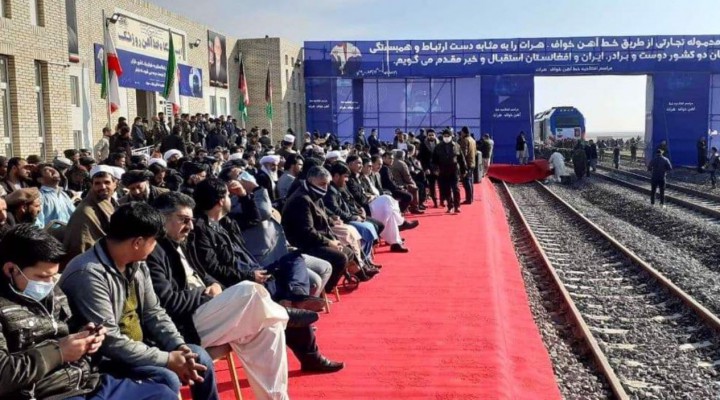 Iran is in talks with the Taliban to extend a rail link from its border city of Khaf to the Afghan city of Herat, an official has said.

The two neighbors marked the opening of their first shared railway network in December 2020, linking Khaf with the Afghan town of Rozanak about 150 kilometres away. But plans for the project to be expanded to reach Afghanistan’s third largest city of Herat have been thrown off course since the sudden collapse of the US-backed government in August.

On Tuesday, deputy head of the Construction and Development of Transportation Infrastructures Company Abbas Khatibi said talks were underway with the Taliban to resume the project.

“Due to the political developments in Afghanistan and the change of government in the country, the construction and completion of the project was stopped for a while, but Iranian officials have recently held talks with the Taliban leadership in this regard and both sides intend to extend the railway to Herat and operate it,” he was quoted by Tasnim news agency as saying.

The Khaf-Herat railway runs along the East-West transit corridor, connecting China to Turkey and Europe via Uzbekistan, Afghanistan and Iran.

“This project will somehow revive the Silk Road. It can connect the East to the West and play an important role in reducing export and transit costs,” Khatibi said.

The railway, he said, has an annual transport capacity of one million passengers and 6 million tonnes of goods which will accelerate transit and cut associated costs.

“The origin and destination of this railway is two economic poles in Iran and Afghanistan, and through this railway line, the possibility of communication between Afghanistan and the southern ports of Iran will be established.

Afghanistan has almost no functioning passenger rail service. The only railway dating from the Soviet times in the 1980s is a short link from Uzbekistan towards the Afghan city of Mazar-i-Sharif.

Khatibi described the 657 km Herat-Mazar track a missing link, which both Uzbekistan and Iran have indicated interest to build.

“If the Afghan sides move to complete and continue this railway line, there will definitely be a big change in the field of transportation. Offers of various investment methods have also been made by Iran to Afghans,” he said.

The Khaf-Herat railroad will boost trade further, allowing trainloads of Afghan goods to reach not only Iranian cities but also the Persian Gulf, the Sea of Oman, the Caspian Sea and land ports in western and northwestern Iran from where they will head to European markets.

Even under US allies at the helm in Afghanistan, Iran’s development projects did not stop in the war-torn country. The Islamic Republic has spent millions of dollars on development and reconstruction projects in Afghanistan. It has built hundreds of kilometers of highways and railroads.

Tehran was one of the largest donors at a 2002 Tokyo conference, pledging more than India, Saudi Arabia, the United Arab Emirates, Turkey, Norway, Switzerland, Australia, and Pakistan combined.

The Islamic Republic also hosts around three million Afghans, including around one million refugees and two million undocumented migrants, according to the United Nations.

Will the Islamic world save Afghanistan?