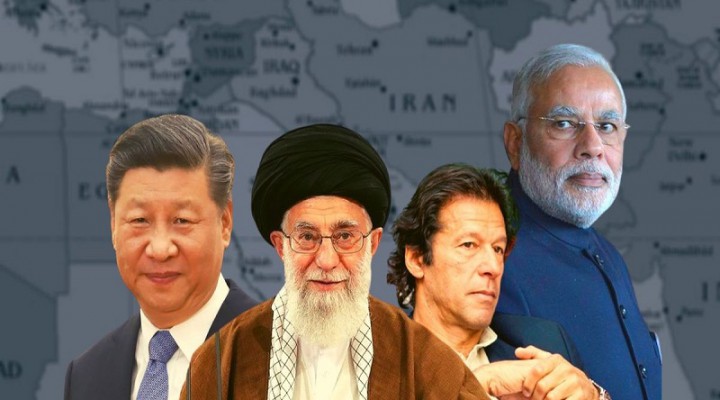 Russia’s grand strategic reorientation to non-Western countries that began in 2014 will undoubtedly accelerate in light of recent events in Eastern Europe will see China, India, Iran, and Pakistan become much more important to it than ever before. These countries, not to mention the Central Asian Republics in which Russia will cooperate closely with each of those four, form the basis of its Greater Eurasian Partnership.

Russia’s grand strategic reorientation away from the West that began in 2014 will accelerate following that US-led bloc’s unprecedented sanctions and other responses after the onset of Moscow’s special operation in Ukraine last week. The Kremlin had already cultivated excellent relations with China, India, Iran, and Pakistan, each of which plays a crucial role in its Greater Eurasian Partnership (GEP), but they’ve all just become so much more important than before in light of these new but not necessarily unexpected circumstances. The present piece will briefly explain why that is, with the intention being to inform the audience of the broader contours of Russia’s multipolar grand strategy.

The author’s detailed piece from late January about “China’s & India’s Interplay Of Importance For Russian Grand Strategy” is essential reading, but for those who don’t have the time, it basically posits that the first-mentioned serves the role of jointly facilitating the emerging Multipolar World Order while the second helps manage the extended bi-multipolar transitionary phase. In the current context, Russia will almost inevitably be compelled to turn to China for financial and other forms of assistance with time, but it should hopefully already by then have achieved success in the other three vectors of its GEP in order for Beijing to offer it better deals than if it hadn’t.

This necessitates making tangible progress on jointly assembling a new Non-Aligned Movement (“Neo-NAM”) with India, which might see its first success in Central Asia prior to be expanded to parts of Africa and then Southeast Asia as well. The purpose is to not come off as “desperate” when approaching China for assistance lest Russia not receive the most optimal deals from the People’s Republic. That’s not to imply that the East Asian Great Power will “take advantage” of the Eurasian one, but just that there’ll certainly be some costs associated in dealing with it due to the US and its Western bloc’s secondary sanctions threats for extending financial and other assistance to Moscow so Beijing will make it worth it.

India will also come upon such pressure but has thus far proven itself to be impressively autonomous in terms of its grand strategy as evidenced by its refusal to submit to the West’s implied demands for it to condemn Russia in recent weeks. By multi-managing its close relations with China and India, the first of which is expected to mostly take a financial-technological form while the second will likely be more strategic, Russia can hopefully increase the prospects of getting the best out of its cooperation with both. Working more closely with Iran will also bolster these chances as well because the Islamic Republic has enormous untapped energy, economic, production, and other sorts of potential.

In addition, Iran has excellent ties with China and India too, the first of which signed a 25-year strategic partnership pact with it last spring while the second relies upon it for access to Central Asia, where Moscow is encouraging it to expand its influence in pursuit of their joint Neo-NAM grand strategy of balancing the bi-multipolar transitionary phase of the emerging Multipolar World Order. Iran, careful as it always is to preemptively avert disproportionate dependence on any given partner, might be inclined to balance China’s forthcoming influence through energy, logistics, technical, and other forms of strategic partnership with Russia.

Furthermore, it deserves mentioning that Iran more openly supports Russia throughout the course of its special operation in Ukraine while China and especially India have remained more neutral for understandable reasons, which is still beneficial to Russia but nevertheless speaks to Tehran’s literally ideological commitment to countering the West and supporting its closest partners who share the same goal. This raises optimism that its authorities will consider relying on Russia and India to balance China in a friendly, gentle, and non-hostile way. The Islamic Republic can very well become the grand strategic point of convergence between them and therefore obtain maximum benefits from those three.

There’s something else to be said about Russian-Iranian relations as well, and that’s the possibility of the first’s energy companies investing much more in the second’s fields. Upon the potential lifting of the US’ unilateral sanctions against Tehran, Moscow might be able to still profit through such joint partnerships and therefore obtain important access to foreign currency that’ll help it offset the consequences of the West’s new economic-financial restrictions against it. The world still requires fossil fuels to run so it’s unrealistic to expect that bloc to sanction joint Russian-Iranian energy projects. Even if they did, non-Western countries might still sign supply contracts with them since they simply need the energy.

Russian-Pakistani relations lack the economic and financial importance of the other three countries that were already discussed but more than make up for it in terms of military-strategic significance. The Afghan Crisis cannot be resolved without Islamabad playing a leading role in the political and humanitarian solution. No country knows Afghanistan better than Pakistan, with whom Russia very closely cooperates for containing the first-mentioned’s many crises, including those humanitarian and terrorist ones that were exacerbated by the West’s chaotic evacuation last August. Simply put, the Russian-Pakistani partnership has become a crucial axis of stability in Central Eurasia.

It also shows promise in terms of their energy, connectivity, and investment cooperation, though those three will certainly take time to mature. Nevertheless, Pakistan is arguably the most important of Russia’s four examined non-Western partners in the security sense due to the role that it plays in helping to manage the Afghan Crisis, which is second to the Ukrainian one for Russia. Should everything spiral out of control there, then last January’s very chaotic Kazakhstani events might unfortunately replicate with wild abandon all throughout Central Asia, thus posing a potentially existential security crisis for Russia of an unconventional nature to complement the conventional one from Ukraine.

Returning back to the Russian-Chinese Strategic Partnership, which serves as the dual engine of the emerging Multipolar World Order, Moscow should therefore wait to approach Beijing for financial, technological, and other forms of assistance until after it’s achieved more tangible progress in its respective strategic partnerships with India and Iran. The Pakistani aspect can’t be presented to China in the same way as the other two in the context that’s being suggested but it would still impress Beijing to see how closely Moscow and its iron brothers in Islamabad cooperate if they were to do even more together than they already are now, especially if they pioneer a trans-Eurasian corridor via Afghanistan.

The overarching trend is that Russia’s grand strategic reorientation to non-Western countries that began in 2014 but will undoubtedly accelerate in light of recent events in Eastern Europe will see China, India, Iran, and Pakistan become much more important to it than ever before. These countries, not to mention the Central Asian Republics in which Russia will cooperate closely with each of those four, form the basis of its GEP. It’s therefore integral for the Eurasian Great Power to masterfully leverage its relations with them in view of its envisioned balancing act across the supercontinent in order to sustainably maintain stability there against the US’ divide-and-rule plots and help cushion the impact of the West’s sanctions.

0 thoughts on “China, India, Iran, And Pakistan Just Became So Much More Important To Russia”