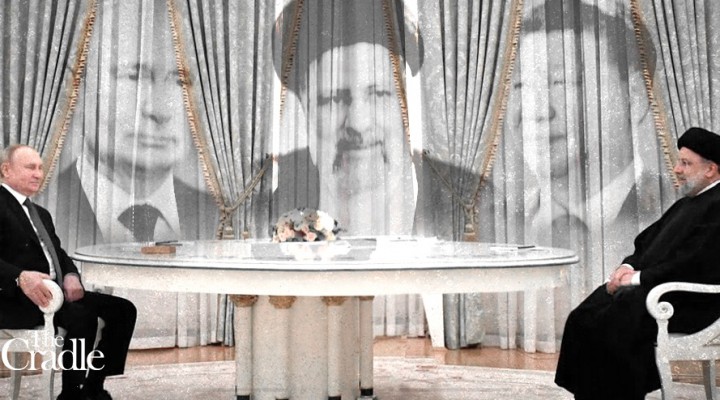 Three ain’t a crowd: The Iran-Russia summit this week, concurrent with RIC military drills in the Sea of Oman, in advance of a Xi-Putin meeting in two weeks, suggests a rapidly-advancing strategic vision for the three Eurasian powers.

The official visit to Russia by Iranian President Ebrahim Raisi, at the invitation of Vladimir Putin, generated one of the most stunning geopolitical pics of the 21st century: Raisi performing his afternoon prayers at the Kremlin.

Arguably, more than the hours of solid discussions on geopolitical, geoeconomic, energy, trade, agriculture, transportation and aerospace dossiers, this visual will be imprinted all across the Global South as a fitting symbol of the ongoing, inexorable process of Eurasian integration.

Raisi went to Sochi and Moscow ready to offer Putin essential synergy in confronting a decaying, unipolar Empire increasingly prone to irrationalism. He made it clear at the start of his three hours of discussions with Putin: our renewed relationship should not be “short-term or positional – it will be permanent and strategic.”

Putin must have relished the torrents of meaning inbuilt in one of Raisi’s statements of fact: “We have been resisting the Americans for more than 40 years.”

Yet, much more productive, was “a document on strategic cooperation” between Iran and Russia that Raisi and his team presented to Russian officials.

Raisi emphasized this road map “can determine the prospect for at least 20 years ahead,” or at least clarify “the long-term strategic interaction between the Islamic Republic of Iran and the Russian Federation.”

Foreign Minister Hossein Amir-Abdollahian confirmed that both presidents tasked their top diplomats to work on the roadmap. This is, in fact, an update of a previous 20-year cooperation treaty signed in 2001, originally meant to last for 10 years, and then twice extended for five years.

A key item of the new 20-year strategic partnership between the two neighbors is bound to be a Eurasian-based clearing network designed to compete with SWIFT, the global messaging system between banks.

Starting with Russia, Iran and China (RIC), this mechanism has the potential to unite member-nations of the Shanghai Cooperation Organization (SCO), the Eurasia Economic Union (EAEU), ASEAN, BRICS and other regional trading/security organizations. The combined geoeconomic weight of all these actors will inevitably attract many others across the Global South and even Europe.

The basis already exists. China launched its Cross-Border Interbank Payment System (CIPS) in 2015, using the yuan. Russia developed its System for Transfer of Financial Messages (SPFS). To build an independent, Russian-Chinese financial system by linking the two should not be a problem.  The main question is to choose the standard currency – possibly the yuan.

Once the system is up and running, that’s perfect for Iran, which badly wants to increase trade with Russia but remains handicapped by US sanctions. Iran has already signed trade agreements and is involved in long-term strategic development with both Russia and China.

In contrast, the only ‘policy’ de facto deployed by the collective West against both Russia and Iran is sanctions. Nullifying these is therefore on top of the agenda for Moscow and Tehran. Iran and the EAEU already have a temporary agreement. What they need, sooner rather than later, is to become full partners in a free trade area.

While Amir-Abdollahian praised the resolution of disputes with neighbors such as Iraq and Turkmenistan, and a reconfiguration of the diplomatic chessboard with Oman, Qatar, Kuwait, the UAE, and even Saudi Arabia, President Raisi – when addressing the Duma – chose to detail complex foreign plots to dispatch networks of Takfiri terrorists to “new missions from the Caucasus to Central Asia.”

As Raisi said,”experience has shown that only pure Islamic thought can prevent the formation of extremism and Takfiri terrorism.”

Raisi was unforgiving on the Empire: “The strategy of domination has now failed, the United States is in its weakest position, and the power of independent nations is experiencing historic growth.” And he certainly seduced the Duma with his analysis of NATO:

“NATO is engaged in penetration into the geographical spaces of various countries under the pretext of cover. Again, they threaten independent states. The spread of the Western model, opposition to independent democracies, opposition to the self-identification of peoples – this is precisely on the agenda of NATO. It is only a deception, we see the deception in their behavior, which will eventually lead to their disintegration.”

Raisi’s main theme is ‘resistance,’ and that was imprinted in all of his meetings. He duly emphasized the Afghan and Iraqi resistances: “In modern times, the concept of resistance plays a central role in deterrence equations.”

The Islamic Republic of Iran is all about that resistance: “In different historical periods of Iran’s development, whenever our nation has raised the banner of nationalism, independence, or scientific development, it has faced sanctions and pressures of the Iranian nation’s enemies,” Raisi emphasized.

On the JCPOA, with the new round of negotiations in Vienna for all practical purposes still bogged down, Raisi said, “the Islamic Republic of Iran is serious about reaching an agreement if the other parties are serious about lifting the sanctions effectively and operationally.”

University of Tehran Professor Mohammad Marandi, now in Vienna as a high-level advisor to the Iranian delegation, compares his experience with the original JCPOA negotiations in 2015, when he was an observer. Marandi notes that as far as the Americans are concerned, “it’s the same mentality. We’re the boss, we have special privileges.”

He stresses, “a deal is not imminent.” The Americans refuse to provide guarantees: “The main problem is the scope of the sanctions, they want to keep many of them in place. In fact they don’t want the JCPOA. Basically it’s the same attitude as during Trump.”

Marandi offers practical solutions. Remove all maximum pressure sanctions. Accept “a reasonable verification process if you have no intention of cheating Iranian people again.” Provide assurances so “Iranians know you won’t violate the deal again. Iran won’t accept threats or deadlines during negotiations.” It’s unlikely the Americans will ever accept any of the above.

The contrast between the Raisi and Rouhani administrations is stark: “In the hope of getting something from the West, the previous administration wasted serious opportunities with both China and Russia. Now it’s a completely different story,” says Marandi.

The Chinese angle is quite intriguing. Marandi notes how Amir-Abdolliahan has just returned from China; and how the only nation in West Asia that the Chinese can reliably depend on is Iran. That is inbuilt in their 20-year strategic deal, many positive facets of which should be adopted by the Russia-Iran mechanism.

The lineaments of a new world

The gist of Raisi’s expose to the Duma is that Iran has been winning battles on two different fronts: against Salafi-jihadi terrorism and against the American campaign of maximum economic pressure.

And that places Iran in a very good position as a Russian partner, with its “extensive economic potential, especially in the fields of energy, trade, agriculture, industry and technology.”

Geoeconomically, Raisi noted how “the privileged geographical location of Iran, especially in the North-South corridor, can make trade from India to Russia and Europe less expensive and more prosperous.”

Way back in 2002, Russia, Iran and India signed an agreement to establish the International North-South Transportation Corridor (INSTC), a 7,200 km multi-modal ship/rail/road cargo network linking India, Iran, Afghanistan, Azerbaijan, Russia and Central Asia all the way to Europe as an alternative transportation corridor to the Suez Canal. Now Putin and Raisi want maximum impetus for the INSTC.

Raisi’s visit happened just before a crucial joint drill, codenamed  “2022 Marine Security Belt,” started in the Sea of Oman, actually the north of the Indian Ocean, with marine and airborne units of the Iranian, Chinese and Russian navies.

The Sea of Oman connects to the ultra-strategic Strait of Hormuz, which connects to the Persian Gulf. Pentagon denizens of the “Indo-Pacific” strategy will be hardly amused.

All of the above spells out deeper interconnection. The Putin-Raisi meeting precedes by two weeks the Putin-Xi meeting at the start of the Winter Olympics in Beijing – when they are expected to take the Russia-China strategic partnership to the next level.

A new Eurasia-led order encompassing the vast majority of the world’s population is a work in fast progress. China using Eurasia as the larger stage to upgrade its global role, in parallel to the fast-evolving Sino-Russian-Iranian interaction, carry larger than life implications for the Western gatekeepers of the imperial ‘rules-based order.’

The de-Westernization of globalization, from a Chinese point of view, does involve a completely new terminology (“community of shared destiny”). And there are hardly more glaring examples of ‘shared destiny’ than its deeper interconnection with both Russia and Iran.

One of the crucial geopolitical questions of our time is how an emergent, supposedly-Chinese hegemony will articulate itself. If actions speak louder than words, then Sino-hegemony looks loose, malleable and inclusive, starkly different to the US variety. For one, it concerns the absolute majority of the Global South, which will be involved and vocal.

Iran is one of the leaders of the Global South. Russia, deeply implicated in de-Westernizing global governance, holds a unique position – diplomatically, militarily, as an energy provider – as the special conduit between East and West: the irreplaceable Eurasian bridge, and the guarantor of Global South stability.

All of that is at play now. It is no wonder that the leaders of the three main Eurasian powers are meeting, and holding discussions in person, within just a matter of days. As the Atlanticist axis drowns in hubris, arrogance, and incompetence, welcome to the lineaments of the Eurasian, post-Western world.