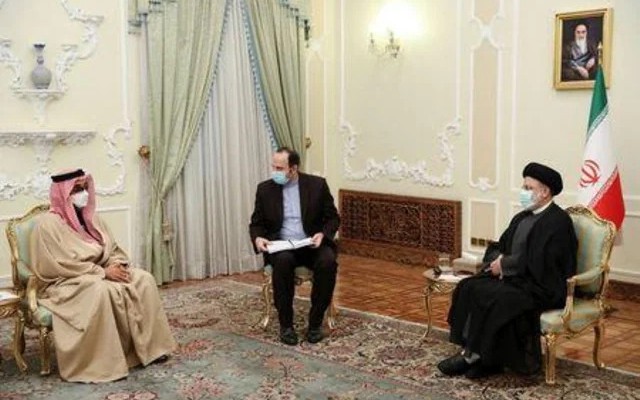 The main turning point in this shift in the map of alliances stems from two defeats: The U.S.’s defeat in Afghanistan and Israel’s defeat in Operation Sword of Jerusalem

“While the central Arab countries of the Mashriq and Maghreb alike are in a state of diplomatic stagnation, and internal and external strife and conflict, the Gulf on both the Arab and Persian sides is witnessing unprecedented activity at this time, and the main focus is on the restoration of relations with Iran, for better or worse,”

Two visits of great strategic importance starting today (Monday) could change the shape of the Gulf and determine its political and economic features for the foreseeable future, including the map of security as well as military alliances.

The first is the visit UAE National Security Adviser Sheikh Tahnoun bin Zayed will make to Tehran today at the invitation of his Iranian counterpart, General Ali Shamkhani.

The second is the Gulf tour that Saudi Crown Prince and de facto ruler Mohammed bin Salman is slated to take at the same time. Its first stop will be Muscat, followed by Bahrain, Qatar, the UAE and finally Kuwait. Topping the agenda are Iran and its nuclear and missile programs, along with the Yemen war.

The significance of the first visit, from Sheikh Tahnoun bin Zayed, the man of reconciliations and the interpreter of the UAE’s new policy, stems from the fact that it indicates an openness to the Iranian state, which until recently was classified as an enemy and a source of a dire threat to the Gulf. It aims to improve relations and resolve differences, creating a state of mutual trust and increasing avenues of political and economic cooperation.

The foreign and regional policy adopted unanimously by the GCC (with the exception of Qatar) throughout the years and decades has been based on tightening the blockade on Iran and fomenting internal unrest and turmoil in the country in a bid to weaken the Iranian regime, if not overthrow it. We add nothing new when we say that this was the objective of both the first Iran war with Iraq in the 1980s, waged with Gulf instigation and financing and the last one in Syria. But when this policy failed to achieve its purposes, meaning changing the Iranian and Syrian regimes, it was abandoned, if on an interim basis, and its opposite, meaning improving relations with Iran, was adopted, per the famous English saying, ‘If you can’t beat them, join them.’ This current turn of events has become the cause for concern for the Israeli occupation state, which is now beating the drums of war against Iran without finding much responsiveness from the Gulf.

The UAE appears to have abandoned its old policies based on ‘antagonism’ and political and military showdowns with its opponents, especially the Muslim Brotherhood and its state backers, such as Libya and Turkey. It now adopts a new policy whose main focus is ‘zero problems’, the same policy Recep Tayyip Erdogan adopted when the Justice and Development Party (AKP) first took power in Turkey and later abandoned, leading to the decline in his popularity and his economic and political achievements. This explains the quiet from the UAE’s online army and Sheikh Tahnoun’s visits to Ankara, Doha, Tehran and NEOM.

The new UAE policy is spearheaded by financial and economic weapons, as manifested in UAE Crown Prince Sheikh Mohammed bin Zayed visiting Ankara, establishing a $10bn investment fund to support the Turkish economy, and attempting to improve relations between the two countries after a period of tension.

The main explanation of this Emirati shift is two-pronged. First, the Muslim Brotherhood’s power has declined in the region, in particular in Egypt, Turkey, Libya and Tunisia, meaning it is no longer as strong as it was in the past. Second, the U.S.’s power and influence in the Middle East is on the decline, and it is gradually withdrawing from it and focusing on the Chinese threat in East Asia and the Russian threat in Central Europe (Ukraine). In order to strengthen its financial weapon, the UAE, which ranks third after Russia and Saudi Arabia in oil exports, is currently planning to invest about $60 billion in the oil exploration and industry sector to increase its share of production to nearly four million barrels per day so as to raise its income and fatten its sovereign wealth fund, which contains some $800 billion or more per the estimates.

Moving onto bin Salman’s first tour of GCC capitals after a break in travel of nearly two years, it reflects confidence, a reversal in Saudi policies, an attempt to restore eroding Saudi influence in the Gulf and the world, and a search for solutions and exit strategies from the Yemen war. This can be interpreted in light of the following points:

–First: The choice of Muscat as the first stop in Prince bin Salman’s tour while the Emirati partner in the Yemen war is the fourth, reflects a shift in the new Saudi-Gulf alliances. In other words, the Sultanate of Oman has moved to the first position for many reasons, starting with the ‘unspoken’ differences between the UAE and Saudi Arabia and the breakdown of their alliance in the Yemen war and perhaps the entire region.

–Second: Rapprochement with the Sultanate may be a prelude to its potential involvement in reconciliation to resolve the Saudi-Iranian dispute, as an alternative to the Iranian-Saudi talks that began Baghdad, out of admiration for Oman’s calm policy, commitment to moderate positions, and distance from axis-based politics and hardline stances, whether in the Yemen war, regional disputes, or relations with Iran. It is not unlikely for bin Salman’s admiration to develop into the partial or total practical application of this approach and for him to abandon the current policy of confrontations and clashes that led to Saudi Arabia’s isolation.

–Third: The new Saudi-Omani alliance – as manifested in Prince bin Salman’s visit and the choice of Riyadh by the new Sultan of Oman Haitham bin Tariq Al Said as the first foreign stop to visit after taking power – is clearly growing stronger and consolidating in the form of increased commercial cooperation and joint projects, and in the new 800km land route between the two countries traversing the Empty Quarter, breaking Oman’s isolation, and opening it to more freedom. Before, there was only one land route connecting the Sultanate to Gulf capitals, passing through the UAE, whereas the new road will obviate that condition and provide direct contact with Saudi Arabia and other states, as well as linking the Sultanate to Syria, Iraq, Lebanon and Jordan, in other words, the Northern Arab world.

In conclusion, we maintain that the main turning point in this shift in the map of alliances stems from two defeats: The U.S.’s defeat in Afghanistan and Israel’s defeat in Operation Sword of Jerusalem, the latest war with the Gaza Strip in which its Iron Dome systems failed, it was isolated from the world for over 11 days, and rushed to Washington requesting Egyptian mediation to stop the war. This is on top of Iran’s ascendancy as a major regional military power, backed by two strategic programs: Its nuclear program (Iran is a threshold nuclear state that now possesses all the elements to build an atomic bomb) and its ballistic missile program that has proven its deterrent power and won battles in Yemen, Gaza, Lebanon and Iraq for its allied military arms.

The Gulf states have reached a firm conviction that neither the U.S., which is on the decline as a superpower, nor Israel can protect them in the coming years. For this reason, the normalization process and the Abraham Accords are on the decline and the Iranian-Arab alliance is on the ascent at all levels.

“But only time will tell”.

One thought on “Shifting the region’s gears”