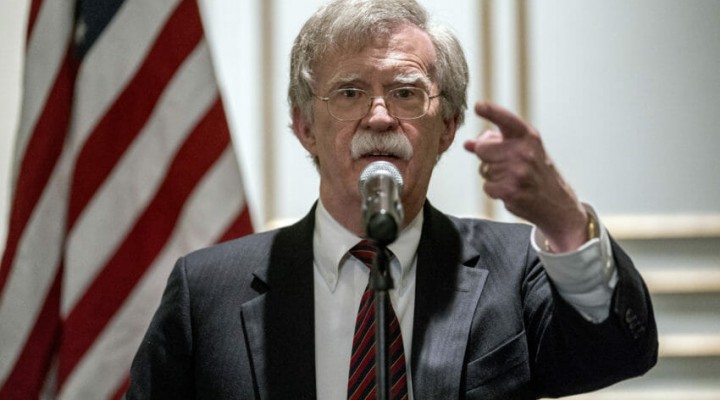 John Bolton has gotten away with a dangerous deception. The national security adviser’s announcement Sunday that the Pentagon has deployed air and naval forces to the Middle East, which he combined with a threat to Iran, points to a new maneuver to prepare the ground for an incident that could justify a retaliatory attack against Iran.

Bolton presented his threat and the deployments as a response to alleged intelligence about a possible Iranian attack on U.S. targets in the Middle East. But what has emerged indicates that the alleged intelligence does not actually reflect any dramatic new information or analysis from the U.S. intelligence community. Instead, it has all the hallmarks of a highly political case concocted by Bolton.

Further underscoring the deceptive character of Bolton’s maneuver is evidence that senior Israeli national security officials played a key role in creating the alleged intelligence rationale for the case.

The new initiative follows an audacious ruse carried out last fall by Bolton and Secretary of State Mike Pompeo, detailed in Truthdig in February, to cast the firing of a few mortar rounds in the vicinity of the U.S. embassy and a consulate in Iraq as evidence of an effort by Tehran to harm U.S. diplomats. Bolton exploited that opportunity to press Pentagon officials to provide retaliatory military options, which they did, reluctantly.

Bolton and Pompeo thus established a policy that the Trump administration would hold Iran responsible for any incident involving forces supported by Iran that could be portrayed as an attack on either U.S. personnel or “interests.”

Bolton’s one-paragraph statement on Sunday considerably broadened that policy. It repeated the previously stated principle that the United States will respond to any alleged attack, whether by Iranian forces or by what the administration calls “proxy” forces. But it added yet another major point to Trump administration policy: “a clear and unmistakable message to the Iranian regime that any attack on United States interests or on those of our allies will be met with unrelenting force [emphasis added].”

That language represents an obvious move by Bolton to create potential options for U.S. retaliation against Iran for a real or alleged attack by “proxy forces” on Israeli or Saudi forces or “interests.” Such a commitment to go to war with Iran over incidents related to Israeli or Saudi conflicts should be the subject of a major debate in the press and in Congress. Thus far, it has somehow escaped notice.

Significantly, on a flight to Finland on Sunday, Pompeo repeated the threat he made last September to respond to any attack by “proxy forces” on U.S. “interests.” He made no reference to possible attacks against “allies.”

Bolton and his staff claimed to the news media that what he characterizes as “troubling and escalatory indications and warnings” are based on “intelligence.” Media reports about Bolton’s claim suggest, however, that his dramatic warning is not based on either U.S. intelligence reporting or analysis.

Citing “U.S. officials,” The Wall Street Journal reported Mondaythat the alleged intelligence “showed that Iran drew up plans to target U.S. forces in Iraq and possibly Syria, to orchestrate attacks in the Bab el-Mandeb strait near Yemen through proxies and in the Personal Gulf with its own armed drones.”

But in the very next paragraph, the report quotes an official saying it is “unclear whether the new intelligence indicated operations Tehran planned to carry out imminently or contingency preparations in the case U.S.-Iran tensions erupted into hostilities.”

A Defense Department source said the intelligence showed “a change in behavior that could be interpreted to foreshadow an attack on American forces or interests,” according to The New York Times’ story on the matter. But the source didn’t actually say that any emerging intelligence had led to such a conclusion or even that any U.S. intelligence official has come to that conclusion.

The timing of the alleged new intelligence also suggests that Bolton’s claim is false. “As recently as last week there were no obvious sign of a new threat,” The Wall Street Journal reported. The New York Times similarly reported that “several Defense officials” said “as recently as last Friday they have had not seen reason to change the American military’s posture in the region.”

Normally, it would require intelligence from either a highly credible source within the Iranian government or an intercept of a sensitive communication from Iran to justify this kind of accusation. But no news outlet has brought word that any such spectacular new intelligence has found its way to the White House or the Pentagon.

The Journal’s report revealed, moreover, that Bolton has only a “fresh intelligence assessment” rather than any new intelligence report. That “assessment” is clearly not a product of the intelligence community, which would have taken at least several days to arrive at such a fundamental reinterpretation of Iranian intentions. The mysterious new “assessment” was evidently unknown outside Bolton’s office before Bolton swung into action last weekend.

We now know, in fact, that the sources behind Bolton’s claim were Israel’s national security adviser and intelligence agency. Axios published a report Monday by leading Israeli journalist Barak Ravid, who covers national security for Israel’s Channel 13, revealing that a delegation of senior Israeli officials had given Bolton “information” about “possible Iranian plots against the U.S. or its allies in the Gulf” two weeks earlier.

The Israeli delegation, led by national security adviser Meir Ben Shabbat, met with Bolton and other unnamed officials in the White House, according to Ravid, to discuss possible Iranian plans. Bolton himself tweeted on April 15 about his meeting with Shabbat: 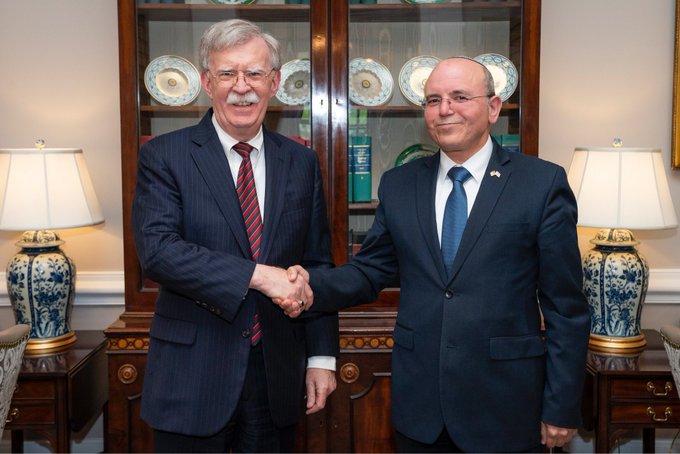 Great meeting with Israeli National Security Advisor Meir Ben-Shabbat today. The close United States-Israel strategic partnership reflects the tremendous strength of the ties between our governments and the citizens of our two allied countries.

Israeli officials told Ravid that they understood that “intelligence, gathered by the Mossad intelligence agency, was part of the reason for Bolton’s announcement.” What Ravid’s official sources told him reveals, however, that what the Israelis provided to Bolton was not really new intelligence at all.; it consisted of several scenarios for what the Iranians might be planning, according to one Israeli official.

“It is still unclear to us what the Iranians are trying to do and how they are planning to do it,” the Israeli official told Ravid, “but it is clear to us that the Iranian temperature is on the rise as a result of the growing U.S. pressure campaign against them, and that they are considering retaliating against U.S. interests in the Gulf.”

That revelation explains the lack of evidence of either genuine U.S. intelligence reporting or proper assessment to support Bolton’s statement.

Bolton is an old hand at using allegedly damning intelligence on Iran to advance a plan of aggressive U.S. war. In 2003-04, he leaked satellite photographs of specific sites in Iran’s Parchin military complex to the press, claiming those images provided evidence of covert Iranian nuclear weapons-related experiments—even though they showed nothing of the sort. He then tried to pressure International Atomic Energy Agency Director General Mohamed ElBaradei to insist on an inspection of the sites. When ElBaradei finally relented, he found nothing in that inspection to support Bolton’s claim.

Bolton’s deceptive maneuver has the effect of increasing the range of contingencies that would trigger a U.S. strike on Iran and represent a major advance toward his long-declared intention to attack it. More alarmingly, however, some media outlets have reported his claims without any serious questioning.

Given the violent struggles in Iraq, Yemen, Syria and Israel itself, Bolton and the Netanyahu government will be able to portray an incident as an attack by Shiite militias, the Houthis or Hamas on Israeli, Saudi or U.S. “interests,” just as Bolton and Pompeo did last fall. That, in turn, would offer an opportunity for urging Trump to approve a strike against one or more Iranian military targets.

Even more alarming is that both acting Defense Secretary Patrick Shanahan and new CENTCOM commander Gen. Kenneth McKenzie have signed up for the Bolton initiative. That means that the Pentagon and military leaders can no longer be counted on to oppose such a war, as they did in 2007, when Vice President Dick Cheney pushed unsuccessfully for a plan to retaliate against a future Iraqi militia attack on U.S. troops in Iraq.

The United States is in danger of falling for yet another war ruse as malignant as those that led Congress and the mainstream media to accept the invasion of Iraq or the Gulf of Tonkin resolution.