HOME / WORLD / Trump voter base would recoil at attack on Venezuela or Iran, backers warn 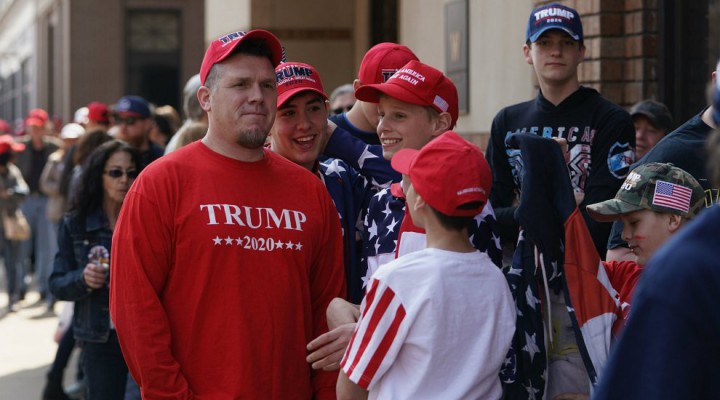 President Trump would destabilize his reelection coalition if he attacks Iran or Venezuela, supporters and outside observers say, as key administration officials threaten war.

Trump is nearly alone inside the West Wing as the voice for military restraint following a phase-out of grassroots backers, five former White House aides say, leaving the often mercurial president with advisers pushing in one direction.

Wars often rally the public around a president, but a Trump-led intervention might hurt him.

“Noninterventionists are an important part of his coalition everywhere, but I think they are most important where the margins are tightest,” said Jesse Benton, who was chairman of Ron Paul’s 2012 presidential campaign and Senate Majority Leader Mitch McConnell’s 2014 reelection.

[Related: US warns Tehran: Iranian attack would be met with ‘unrelenting force’]

“There are a lot of blue collar and middle class voters who are sick of all the wars,” Benton said.

Nicole Hemmer, a presidential historian at the University of Virginia, said Trump might convince most of his base to support a war, but that there would be near-term costs.

“There is a part of President Trump’s base that is avowedly anti-intervention, and will strongly protest intervention in Venezuela or Iran. This strain runs from libertarians and paleoconservatives into the darker recesses of the alt-right,” Hemmer said.

A change in the in-house advice Trump gets is clear to former White House aides who worked under Trump during his first two years in office.

“It used to be that the staff around the president were the counterweight to some of his more aggressive impulses. Now it seems as if the situation has reversed itself,” said Fernando Cutz, a Trump White House alumnus and former National Security Council director for South America.

Cutz said, “The president is the counterweight to some of his more hawkish staff members, particularly [national security adviser John] Bolton.”

So far, Trump largely has adhered to his 2016 statements about military interventions, which he said “unleashed” civil wars and religious fanaticism, and “horribly wasted” thousands of lives and “many trillions of dollars.”

“Logic was replaced with foolishness and arrogance, which led to one foreign policy disaster after another,” Trump said in a 2016 policy speech, pushing for American military strength coupled with restraint.

In office, Trump continued most Obama-era conflicts, including against Islamic State and al Qaeda jihadis, and he approved limited attacks on Syria’s government in response to alleged chemical weapons use. But recently, officials led by Bolton have put more wars on the table.

On Sunday, Bolton threatened Iran with “unrelenting force” as the Pentagon deployed an aircraft carrier nearby. Last year, he requested options to attack Iran.

Unlike Trump, who called the 2003 invasion of Iraq “the single worst decision ever made,” Bolton is an unapologetic supporter, and his hawkish recent statements have been echoed by Secretary of State Mike Pompeo.

“The only true counterweight to all of the hawkish interventionists in the administration is the commander in chief himself,” one former White House official said. “He’s surrounded himself with folks ten times more hawkish than he is himself.”

Another former White House official, who also requested their name not be used to speak candidly, said “the president is not foolish” and regularly seeks outside advice.

“There may not be anyone on the inside whispering in [Trump’s] ear to be careful of Bolton, but there are very many people on the outside,” the former official said. “He’s not going to allow the wool to be pulled over his eyes because he wasn’t paying close enough attention and was listening to Bolton.”

The second official said, “If a good case is made to [Trump] that he should intervene, I think he would, and I think his base would support him,” indicating that it would need to be obvious there was little choice. But generally, this source said, the base does not believe there’s a good case to intervene in Iran or Venezuela.

“Trump believes we should not be getting involved in foreign wars,” they said. “I also think he realizes that his political success is in part tied to that. It would absolutely alienate his base if he were to do that. There will be a lot of posturing but they are not going to go to war.”

The third official said they view Bolton as less manipulative than his predecessor H.R. McMaster, who they said was elated to discover an Iranian plot that could provide pretext to attack. McMaster’s failed efforts at intervention, including in Syria, point at institutional caution.

After a North Korean missile test in 2017, McMaster sought options for an immediate military attack during a call with then-Defense Secretary James Mattis and then-Secretary of State Rex Tillerson.

The Cabinet secretaries mistakenly believed that McMaster hung up after speaking, and shared surprisingly frank thoughts, not realizing they were on speakerphone in McMaster’s office.

“They thought the White House hung up our side of the phone call,” the former official said. “Mattis was like, ‘Rex, are you still here?’ [Mattis] was like, ‘Oh my God, that moron is going to get us all killed. He is an unstable asshole.’ McMaster was standing there over his desk. … He was turning bright red.”

In the end, the outcome of any intervention would matter most, said Richard Betts, a Columbia University professor and former CIA and defense policy adviser.

“Trump’s aggressive toughness is part of his appeal, as long as it doesn’t seem to boomerang,” Betts said.

0 thoughts on “Trump voter base would recoil at attack on Venezuela or Iran, backers warn”