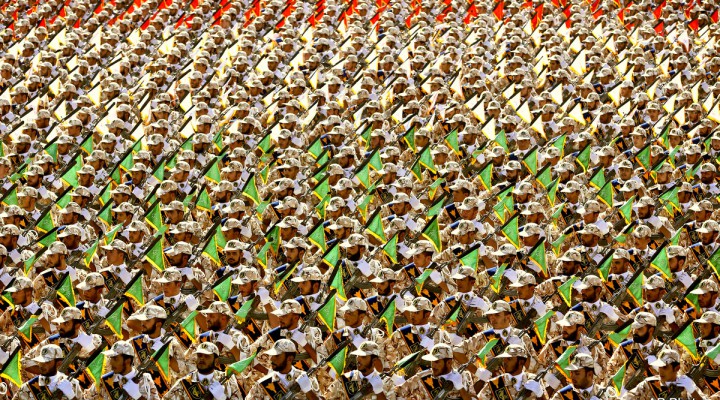 With the IRGC now officially labeled a “foreign terrorist organization” by the U.S. government, the march to war with Iran — long a goal of top Trump administration officials — is closer than ever.

The Trump administration designated Iran’s Islamic Revolutionary Guard Corps (IRGC), an elite group of that country’s military, as a foreign terrorist organization early Monday, confirming a report published last Friday in the Wall Street Journalthat suggested that such a move was likely to occur in a matter of days. In a statement released Monday, the White House stated:

This unprecedented step, led by the Department of State, recognizes the reality that Iran is not only a State Sponsor of Terrorism, but that the IRGC actively participates in, finances, and promotes terrorism as a tool of statecraft.”

While most reports on the subject have interpreted the move as aimed at pressuring European countries and others from conducting business with Iran while also making the Iran nuclear deal much more difficult to revive, the move would further allow the Trump administration to conduct more “robust” combat operations against Iran’s military, all without congressional approval.

As was noted by the WSJ and other outlets, the Trump administration’s upcoming move to label the IRGC a foreign terrorist organization would mark the first time that any element of a foreign state is officially labeled as a terrorist group. The Bush administration had previously blacklisted the Quds Force, the IRGC unit in charge of foreign operations, in 2007 “for its support of terrorism,” and further described the group as Iran’s “primary arm for executing its policy of supporting terrorist and insurgent groups.” However, unlike the Trump administration, they stopped short of labelling the IRGC, or any of its elements, as foreign terrorist organizations themselves.

Reports from last month indicate that current Secretary of State and former CIA Director, Mike Pompeo, was one of the administration’s top officials behind the move. At the time, the New York Times noted that many officials in the Pentagon and the CIA opposed the move, given that such a designation against the IRGC could have profound repercussions for U.S. troops stationed abroad, particularly in the Middle East. Indeed, soon after the recent WSJ piece was published, IRGC’s commander, Mohammad Ali Jafari, warned that U.S. troops in the Middle East would “lose their current status of ease and serenity” and that Iran’s government would make a “reciprocal move” against the U.S. military — labeling it a terrorist group — were the Trump administration to go forward with its latest move to target the IRGC.

Where’s Trump going with this designation?

Several reports have mulled over the likely motives behind the move to label the IRGC a foreign terrorist organization, with some suggesting that the move would be used as a threat to dissuade other countries from conducting business with Iran, while others asserted that the move was aimed at curbing the ability of any future U.S. president — particularly if a Democrat takes the White House in 2020 — from resurrecting the Joint Comprehensive Plan of Action, know broadly as the Iran nuclear deal. Trump unilaterally withdrew from the Iran nuclear deal in 2018, a move which earned him strong praise from long-time Iran hawks as well Israel’s Prime Minister Benjamin Netanyahu and Trump’s most powerful political donor, billionaire Sheldon Adelson.

Yet, upon more careful consideration, an economic motive seems unlikely in light of the fact that the Trump administration has already imposed draconian sanctions on almost every sector of Iran’s economy and government, including the IRGC. In addition, making such a drastic move now to prevent a future president in 2020 or beyond from reviving the Iran deal also seems rather unrealistic given that the 2020 challenger to Trump is still unknown.

A much more likely reason for the designation is the fact that labeling any group a foreign terrorist organization allows that group to be targeted by the U.S. government by means of the Authorization for Use of Military Force (AUMF). Past reports on other groups labeled as terrorist organizations have noted that “though the CIA can gather intelligence on terror groups regardless of their status on a State Department list, official designation unlocks more robust means to combat them since it triggers the Authorization for Use of Military Force.” Notably, the CIA opened a new “mission center” on Iran in June 2017 — when Pompeo was CIA director — aimed at “turning up the heat” on Iran and making the country a “higher priority” for American spies. Now, just under two years later, the designation of the IRGC as a terrorist group allows those clandestine operations to become “more robust” and more overt thanks to the years-long expansion of the 2001 AUMF.

Colonel W. Patrick Lang, a retired senior officer of U.S. Military Intelligence and U.S. Army Special Forces, noted on Sunday that the move amounts to a “declaration of war” against Iran’s military, writing:

The official designation as “terrorist” of the IRGC, which is a 125,000 man army with its own navy and air force, makes it legal for the U.S. Armed Forces to attack the IRGC and its people wherever they are found and under any circumstances that may occur.”

Other echoes Lang’s concerns, including Wendy Sherman, former under-secretary of state and current director of the Center for Public Leadership at the Harvard Kennedy School. Sherman told Reuters on Sunday:

One might even suggest, since it’s hard to see why this is in our interest, if the president isn’t looking for a basis for a conflict. The IRGC is already fully sanctioned and this escalation absolutely endangers our troops in the region.”

The Authorization for Use of Military Force (AUMF) was originally passed in 2001 in the wake of the September 11 attacks and its text authorizes the president:

Despite being expressly aimed at groups believed to be responsible for September 11, the AUMF has been expanded under the Bush, Obama and Trump administrations to justify military action in dozens of countries against dozens of groups, many of them with no links to al Qaeda.

Trump, since his first year in office, has been building a case to link the IRGC to al Qaeda, a case entirely devoid of evidence and one that has long seemed aimed at triggering military conflict between the United States and Iran, particularly by means of the 2001 AUMF. In remarksdelivered on October 13, 2017, Trump made the following claims:

Iranian proxies provided training to operatives who were later involved in al Qaeda’s bombing of the American embassies in Kenya, Tanzania, and two years later, killing 224 people, and wounding more than 4,000 others.

The regime harbored high-level terrorists in the wake of the 9/11 attacks, including Osama bin Laden’s son. In Iraq and Afghanistan, groups supported by Iran have killed hundreds of American military personnel.”

Though Trump’s claims are demonstrably false, the fact that he is surrounded by many long-time Iran hawks does not bode well for the current state of affairs following the administration’s declaration of the IRGC as a foreign terrorist organization.

Setting up a new war?

Another point of concern is the fact that the 2002 AUMF, regarding the president’s ability to authorize the use of military forces in Iraq — which borders Iran — is still on the books. That AUMF, which gave the president authority to send U.S. military troops to Iraq in the lead-up to the Iraq War in order to defend “the national security of the United States against the continuing threat posed by Iraq,” still provides the executive branch with the ability to order military action in Iraq without approval either from the U.S. Congress or from Iraq’s government.

Dr. Jack Goldsmith, a former assistant attorney general in the Office of Legal Council during the George W. Bush administration, noted in 2014:

[The 2002 AUMF] gives the President the discretion to determine when the use of the U.S. Armed Forces is necessary and appropriate to defend U.S. national security against the continuing threat posed by Iraq (not the government of Iraq, not Saddam Hussein, but Iraq), and authorizes the President to use those forces in that circumstance.”

This AUMF is important now in light of the recent designation of the IRGC as a terrorist group and the fact that IRGC-aligned militias are present and active in Iraq, with many of them collaborating with U.S. troops stationed in Iraq in efforts to target terrorist groups like Daesh (ISIS). This declaration not only undermines that collaboration, it also would give Trump authority — per the 2002 AUMF — to send U.S. troops to Iraq without congressional approval in response to the supposed “national security threat” posed by the now-”terrorist” IRGC-aligned militias in the country. Notably, this declaration comes soon after the current Iraqi government called to expel all U.S. troops from its territory.

Not only that, but the new declaration of the IRGC as a terrorist group could also have consequences as far away as Venezuela. Indeed, the U.S. government has claimed for over a decade that the IRGC is “active” in Venezuela and accuse them of involvement in Venezuelan intelligence operations, the training of left-wing Colombian paramilitary groups and security assistance to the Venezuelan government. With the IRGC now officially labeled a “terrorist organization”, the provisions of the AUMF now triggered following Trump’s declaration could have very real, troubling consequences for his administration’s regime change efforts in the oil-rich South American country.

With the IRGC now officially labeled a “foreign terrorist organization” by the U.S. government, the march to war with Iran — long a goal of top Trump administration officials — is closer than ever. With more overt and robust military and intelligence operations targeting Iran and the 2001 and 2002 AUMFs now triggered to allow the deployment of U.S. ground troops in and near Iran, the U.S. is just steps away from triggering what could turn into not just a regional war in the Middle East but a global one.

Editor’s note: This story was updated to explain the potential consequences of Trump’s decision to label the IRGC a terrorist group in relation to the Trump administration’s current campaign to topple the Venezuelan government.

0 thoughts on “Is Trump’s Designation of Iran Revolutionary Guard Corps as Terrorist Organization a Set-Up for War?”