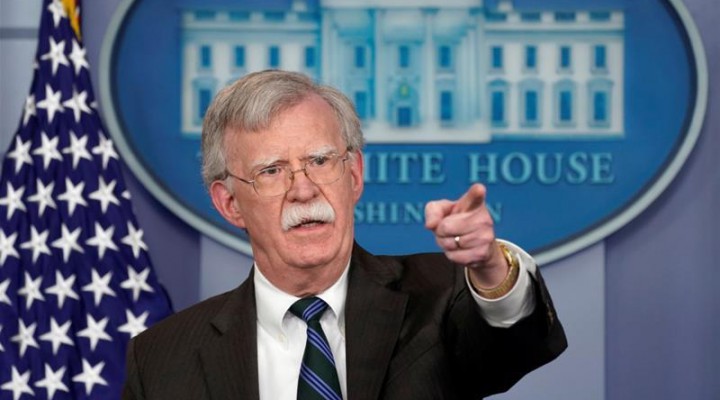 The American political landscape is complicated. The last I checked there was some other bloke in the White House calling the shots, and now all of a sudden everyone’s taking orders from John Bolton.

To be perfectly honest, I don’t even remember the US having another election. I thought it was every four years, but who knows? I used to think the US had a Constitution and that turned out to be a myth.

Maybe Robert Mueller’s investigation got rid of the last guy like the Democrats promised and the Americans elected President Bolton after that? I know I’m supposed to be a political commentator and all, but there’s too much to keep track of and it’s all very confusing.

So now America has a new president, and you know what? Not a fan. Not a fan at all. He’s always trying to start wars and interfere in the affairs of other nations like he’s some kind of psychopath or something. I know Americans aren’t fond of foreigners criticising their government officials, but to be perfectly frank I don’t know what you Yanks were thinking electing this chap.

I could understand why you all elected the last guy, the fellow with the reality TV show. I didn’t agree with a lot of his policies and his personality was often downright oafish, but I could understand. He promised to end interventionist wars and bring all the wasted money and resources back to America, which if I recall correctly he wanted to make great and put first or something of that nature. How does a country go from selecting a president like that to President Bolton?

I oversaw Iran policy and planning at the Pentagon from 2009-2011, at the height of concerns over Iran’s nuclear progress, and no plausible contingency except invasion and regime change would require sending 120,000 US forces to the Middle East. https://www.nytimes.com/2019/05/13/world/middleeast/us-military-plans-iran.html …

The plans call for up to 120,000 American troops but not a land invasion of Iran. They were updated at the request of John R. Bolton, the national security adviser.

3,200 people are talking about this

I mean, look at what your new president is doing in Iran. Your last president campaigned against wars in the Middle East, correctly pointing out that they “have unleashed destruction, terrorism and ISIS across the world,” and frequently criticized his predecessor for excessive hawkishness towards Iran. Now your 46th president is weighing the possibility of sending 120,000 troops to fight Iran, which former National Security Advisor Colin Kahl said is an operation that would only be used in the event of an invasion with the goal of regime change.

Or how about Venezuela? Your last president’s inauguration speech criticized US interventionism, and won the primary and general elections largely due to his criticisms of his opponents’ interventionist foreign policies, but now President Bolton is actively pushing to topple Venezuela’s government and install a puppet regime there.

Or Syria? What’s going on with Syria? Your last president was saying he’s going to bring all the troops home, then next thing you know Bolton is in charge saying it’s basically never going to happen.

Look, Americans, I don’t want to tell you how to run your country, but in my opinion you’ve got to be more careful about who you elect to control the most powerful military force in the history of civilisation. This Bolton fellow is a deranged maniac with an extensive history of catastrophic war peddling and downright sociopathic behavior, and you should never have allowed him to be in charge.

Next election, whenever that is, please make sure you turn up at the voting booths in record numbers and make sure your voice gets heard. You’re lucky enough to live in a nation where you get to directly participate in your government’s behavior by voting for who will represent your interests in your government based on their political positions, and you should take full advantage of that wonderful blessing.

There are nations in this world who have their leaders selected for them, or where they get to vote as a symbolic placebo but their votes don’t matter at all when it comes to the way their nation is actually governed. Count yourselves lucky that you don’t live in one of those.

Trump Is Being Set-up for War with Iran