HOME / WORLD / The Right May Finally Get Its War on Iran 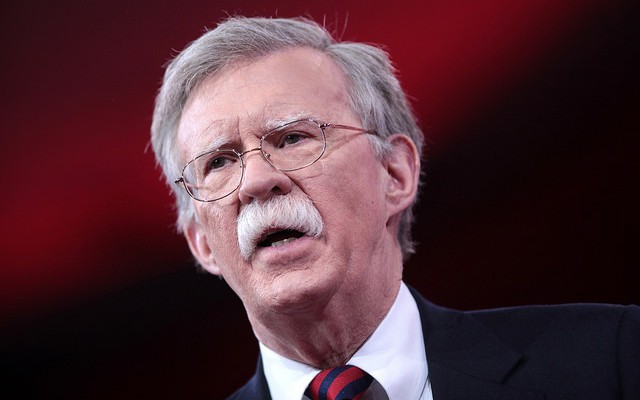 John Bolton has never made a secret of his burning desire to stoke a war between the United States and Iran. But Bolton is not the only one on Donald Trump’s national security team who dreams of such a military confrontation. Secretary of State Mike Pompeo has joined with Bolton in recent months to prepare a case for possible war with Iran.

The tactics used by Pompeo and Bolton bear a strong resemblance to those pursued by Dick Cheney when he pushed for an attack on Iran from 2004 to 2007. Like Cheney, Pompeo and Bolton have sought to generate a phony crisis over Iranian “proxies” in Iraq, and have created the equivalent of a myth of an Iranian covert nuclear weapons program by conjuring up a nonexistent Iranian intercontinental ballistic missile (ICBM) threat.

When the plan for unprecedented economic sanctions on Iran was unveiled in May 2018, along with Trump’s announcement that he was pulling out of the Joint Comprehensive Plan of Action—commonly known as the Iran nuclear deal—the administration denied that its objective was regime change. As Pompeo put it, Trump was “ready, willing and able to negotiate a new deal.”

The Trump White House has taken advantage of Trump’s diplomacy with North Korean leader Kim Jong Un to sell the idea that he’s willing to negotiate a new relationship with Iran. In July, Trump said of the Iranians, “[A]t some point, they’re going to say ‘let’s make a deal.’ ”

But the demands on Iran that accompany the administration’s pressure campaign belie the notion that its objective is to reach a new agreement. The key demands outlined by Pompeo on May 21, 2018, are clearly based on the policy agenda of Israeli Prime Minister Benjamin Netanyahu. It’s an agenda for regime change and war, not a new deal with Iran.

At the top of Pompeo’s list are demands that Iran end its support for Hezbollah, including its supply of ballistic missiles to the Lebanese Shiite organization, and the “halt [to] further launching or development of nuclear-capable missile systems.”

Those demands reflect an extraordinary agreement in December 2017, reported in the Israeli press, between the Trump administration and the Netanyahu government on a joint strategic work plan that included precisely those points on Pompeo’s list—countering Iranian ballistic missile development, as well as the supply of more accurate missiles to Hezbollah through Syria.

The consequences of enforcing such demands would be a dangerous destabilization of the already tense military standoff between Israel and Iran. Iran now depends on a combination of its own ballistic missiles and Hezbollah’s ability to retaliate against Israel to deter an Israeli, Saudi or U.S. attack on its homeland. To agree to stop testing its own missiles to improve their accuracy and supplying Hezbollah with accurate weapons would allow Israel, which has long wanted to destroy Hezbollah’s military capability, to degrade Hezbollah’s deterrent over time through its own missile strikes. The net result would be to leave Iran with a seriously degraded deterrent, especially in light of Israel’s modern missile defense system.

No Iranian leader, regardless of ideology, could survive politically after agreeing to such demands, as any intelligence analyst worth his or her salt has pointed out in recent months. Those clearly nonnegotiable demands give away the real aim of the Trump administration to bring about regime change. Instead of relying entirely on internal Iranian dynamics to topple the regime, the administration’s Iran strategy has now begun to resemble the one pursued by Cheney and the neoconservatives, who sought an excuse to provoke war with Iran during the George W. Bush administration.

In September, the response of Bolton and Pompeo to incidents in Iraq involving a few rockets that reportedly fell in the vicinity of U.S. diplomatic posts in Baghdad provides insight into their concept of regime change. Bolton requested retaliatory options from the Pentagon, which responded with a set of options that included a raid on an Iranian military facility, according to The New York Times.

But senior U.S. military officials were alarmed at Bolton’s apparent promotion of such a retaliatory strike, which they feared could either start a war with Iran or result in the complete expulsion of U.S. military personnel from Iraq. “People were shocked,” one former administration official said. “It was mind-boggling how cavalier they were about hitting Iran.”

But it wasn’t only Bolton who seized on the incident to lay the political basis for a possible strike against Iran. In a Sept. 21 interview with CNN, Pompeo said, “We will not let Iran get away with using a proxy force to attack American interests. If they are responsible for the arming and training of these militias, we will go to the source.”

And in a Foreign Affairs magazine article in October, Pompeo claimed that Iranian “proxies” had “launched [a] life-threatening rocket attack against the U.S. embassy compound in Baghdad and the U.S. consulate in Basra.” He declared that the administration would “respond swiftly and decisively in defense of American lives” if such an attack were to result in injury to U.S. personnel or damage to U.S. facilities.

But Pompeo’s description of the incidents bore little resemblance to the reality. Not only was there no danger to U.S. diplomats, but no reason to believe that any such danger was intended. On Sept. 8 and 9, two rockets fired in Baghdad landed in an “abandoned lot” near the Egyptian Embassy, according to a Reuters report—more than one full kilometer away from the U.S. Embassy.

That same night, in southern Iraq, two rockets fired in the general direction of the U.S. Consulate, which is adjacent to the Basra International Airport, struck the airport’s outer security perimeter, well away from the consulate, according to Michael Knights of the Washington Institute for Near East Policy. This indicates that they were not intended to harm the consulate, but were merely warning shots, Knights believes. On Sept. 28, three more rockets struck consulate property, but caused no damage or casualties.

The distortion of incidents that appear to have reflected a cautious political signaling by Shiite militias in order to justify a U.S. retaliatory strike against Iran presents a striking parallel with Cheney’s effort to spark a war with Iran in 2007. Cheney’s ploy was to claim that Iran was supplying Iraqi Shiite militias with highly lethal charges that could penetrate U.S. armored vehicles.

Other key policymakers in the Bush administration rejected Cheney’s assertion that Iran was supplying those weapons, so Cheney did an end run around them: He prevailed on Bush to choose Gen. David Petraeus as the new commander in Iraq in early 2007 on the condition that Petraeus support the Cheney charge against Iran.

That summer, Cheney proposed that if the U.S. military found evidence of Iranian support for anti-U.S. forces in Iraq, it should carry out a limited strike against Iranian Islamic Revolutionary Guard Corps camps in Iran used to train Shiite militia fighters in Iraq. But Pentagon officials stifled Cheney’s proposal by arguing that such a move would begin a tit-for-tat escalation with Iran, according to former Deputy Assistant Secretary of State J. Scott Carpenter.

Thus, both Cheney in 2007 and Bolton and Pompeo in 2018 discussed a U.S. strike against Iran based on a fabricated Iranian threat to U.S. personnel in Iraq through “proxy” forces.

Bolton and Pompeo are pursuing another angle on Iran that parallels Cheney’s. As Cheney’s policymaker on Iran from 2003 to 2007, Bolton argued that Iran was threatening to get nuclear weapons. Now, Bolton and Pompeo have adopted Netanyahu’s longtime argument that Iran is developing an intercontinental ballistic missile that will allow it to target the United States with nuclear weapons.

On Jan. 3, Pompeo condemned Iran for planning to launch three rockets called Space Launch Vehicles (SLV) that he said incorporate technologies “virtually identical” to what is used in intercontinental ballistic missiles. Pompeo said the planned rocket launches would violate U.N. Security Council Resolution 2231, which called upon Iran not to “undertake any activity related to ballistic missiles designed to be capable of delivering nuclear weapons.” He warned Iran that the administration “will not stand by and watch the Iranian regime’s destructive policies place international stability at risk.”

Pompeo and Bolton base their ICBM argument on the spurious claim that Iranian SLVs rely on technology that is essentially indistinguishable from an ICBM. But that idea has been thoroughly demolished by the leading independent specialist on the issue. Michael Elleman of the International Institute for Strategic Studies, in Washington, D.C., explained in detail in March 2018 why Iran’s SLVs—the Safir and the Simorgh—are fundamentally different from an ICBM or any other ballistic missile.

The second-stage propulsion systems for the SLVs, Elleman wrote, “rely on low-thrust, long-action time engines, which are ideal for accelerating a satellite on a path parallel to the earth’s surface and into a sustainable orbit.” But such engines are “poorly suited for ballistic missile trajectories,” which must reach much higher altitudes, he observed.

Elleman also pointed out that the Simorgh must be “prepared for launch over an extended time on a fixed launching pad,” making it “vulnerable to pre-launch attack.” That would explain why, he wrote, no country has ever “converted a satellite launcher into a long-range ballistic missile.”

Because Iranian SLVs cannot be considered as designed to carry a nuclear weapon, testing them is certainly not a violation of Resolution 2231, contrary to Pompeo’s position. But for Pompeo and Bolton, it provides another rationale to attack Iran—just as Cheney originally planned to use the false claim of a covert Iranian nuclear weapons program as justification for attacking Iran, until he and Bush were rebuffed by the Joint Chiefs of Staff in a December 2006 meeting.

These parallels between the Cheney push for war against Iran and the Pompeo-Bolton schemes to justify such a war tell only part of the story. There are differences between the two situations that could make the present danger even greater. Trump may be more manipulable by Pompeo and Bolton than George W. Bush was by Cheney. And although the military leadership is clearly still opposed to war with Iran, as it was in 2006 and 2007, it remains to be seen whether the next secretary of defense will be independent enough to stand up to Pompeo and Bolton on the issue.

On the face of it, the combination of Bolton, who seems utterly irrational about war with both Iran and North Korea, and Pompeo, who has apparently adopted extreme right-wing views on Israel as a result of his belief in “the rapture,” presents a greater danger of success in precipitating war than did Cheney. Unless much stronger anti-war forces can be organized in coming months, that danger appears extremely serious.