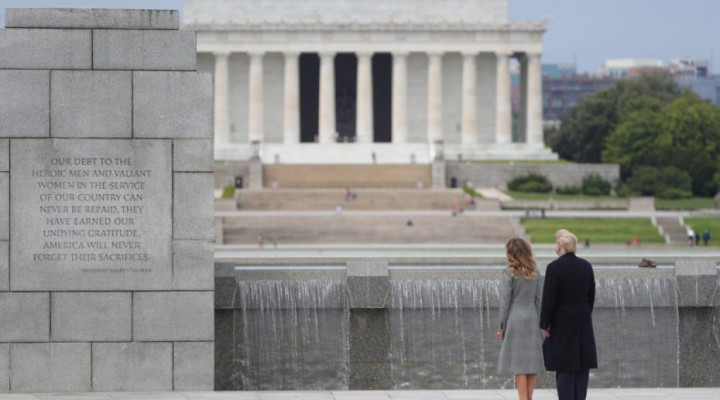 U.S. President Donald Trump this week hailed the 75th anniversary marking the fall of the Third Reich, while at the same time embarking on a reckless war path with China.

The memory of those who gave their lives in the historic defeat of Nazi fascism could not be more insulted than this: U.S. President Donald Trump this week hailed the 75th anniversary marking the fall of the Third Reich, while at the same time embarking on a reckless war path with China.

Trump is accusing China of responsibility for the Covid-19 pandemic which has ravaged the world and the United States in particular. With the world’s highest number of deaths from the disease and the U.S. economy facing ruination, Trump is angrily trying to scapegoat China for the crisis, rather than being held to account for the inherent failings of his administration or the immanent problems of American capitalist society.

This week, the U.S. president declared the Covid-19 crisis the “worst attack” ever on American soil, saying it was much worse than either Pearl Harbor or the 9/11 terror attack in 2001. In the same breath, Trump blamed China for the disaster, claiming that Beijing blindsided the U.S. by “covering up” the viral outbreak when it occurred at the end of last year. The Trump administration has gone even further to accuse China of releasing the deadly virus from a laboratory. The White House and anti-China hawks in Washington are clamoring for massive financial reparations from Bejing.

The explosive tensions and hostility from Washington towards China pre-date the Covid-19 pandemic. The latter has merely brought U.S. belligerence to the fore. This belligerence stems from American global power based on imperialist impulses and its fixation on hegemony. Hence the same kind of bellicosity is expressed at other times towards other nations deemed to be obstacles to U.S. power. Russia is apt to being the focus of Washington’s ire when the latter is not obsessed with China. Other nations targeted include Iran, Venezuela, North Korea and Syria.

With characteristic generosity, Russian President Vladimir Putin held a customary phone call with Trump this week to mark the 75th anniversary of the end of the Second World War in Europe. Both leaders reportedly emphasized the historic significance of the defeat of Nazi Germany and fascism. Putin reminded his American counterpart of the “allied spirit” in winning that victory when the troops from both nations embraced on the River Elbe in Germany on 25 April 1945, two weeks before the final surrender of the Nazi Reich.

Such an appeal to a contemporary U.S. leader is bound to fall on deaf ears. Trump may mouth the appropriate platitudes about historic victory over fascism. But his words are meaningless. Indeed, the words of virtually every U.S. president since the end of WWII about defeating fascism and forging an international alliance for peace are meaningless. With the possible exception of John F Kennedy who embraced genuine nuclear arms controls with Nikita Khrushchev in 1962-63, only to be later assassinated by the American Deep State.

Following the Second World War and the birth of the U.S. military-industrial complex and the formation of the national security state run by the CIA, international cooperation and peace would henceforth become anathema to American global interests. In many ways, the U.S. state came to define its vital interests in imperialist terms. Conflict and war would be a corollary of Washington’s foreign policy. How many wars, subversions, subterfuges, proxy conflicts has the U.S. been engaged in over the past seven decades since the end of WWII? Dozens if not scores, amounting to millions of lives destroyed, whole nations irreparably scarred or destroyed, trillions of dollars wasted.

The never-ending militarism of the United States is an integral part of its corporatist capitalist economy and corporatist political ruling system. Arms race, space weaponization and Cold Wars are the relentless manifestation of a belligerent state that views the world as zero-sum power play for domination. In short, fascism.

It is thus futile to appeal to the United States, as it exists, in order to form any kind of peaceful cooperation or alliance. It is wired for war because of its inherent imperialist functioning. Just look at the way the current figure head in the White House is flouting normal diplomacy and decency in a madcap provocation for war with China.

President Putin like many other Russian people know the precious victory of WWII. Nearly 27 million human beings from the former Soviet Union were killed in the war against fascism. Their descendants know the preciousness of peace.

If Trump and other U.S. leaders had any genuine appreciation of the defeat of fascism in 1945, they would not be acting as the fascist bullyboys that they so evidently are today. The barbarity of U.S. conduct, threats and sanctions towards China, Russia, Iran, Cuba, Venezuela and other nations, demonstrates that fascism is not dead. The 75th anniversary only marks the defeat of a particular version of fascism – the Nazi Reich.

The United States and its thuggish president show that the more general struggle against fascism continues. It is even more an imminent threat today than ever. Trump’s commemorative words on the 75th anniversary are delusional and an abject insult to the memory of those who died fighting fascism.