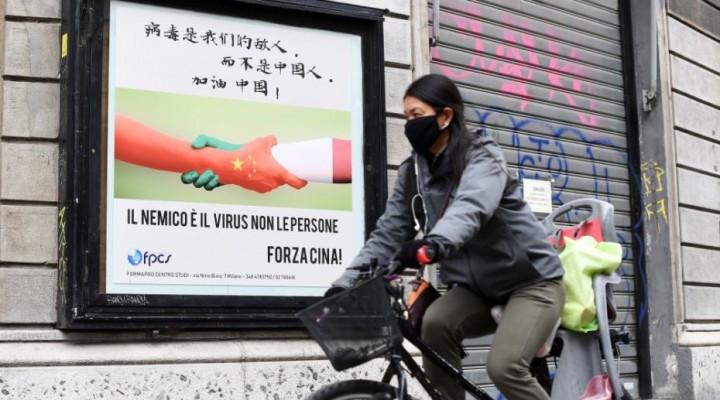 The publicly documented timeline of the pandemic confounds the “blame China” narrative. So too does the disproportionate mishandling …

China is being put in a no-win bind. It is accused of misleading the world over the Covid-19 outbreak, which is in turn prompting demands for financial compensation. The United States, Britain, France and Australia have pushed this narrative. Demonization of China involves claims that Beijing has fomented disinformation about the pandemic.

The publicly documented timeline of the pandemic confounds this “blame China” narrative. So too does the disproportionate mishandling of the crisis in the U.S., Britain and Europe.

Yet when China protests such claims, this is then portrayed as evidence of a “cover-up”, further fueling the demonization campaign.

Paradoxically, and more plausibly, it is China that is the victim of Western disinformation. With twisted logic, however, any effort by China to deny the false claims is then invoked as “evidence” of guilt on the part of Beijing.

Take the headline in the New York Times on April 28: “China Mounts Aggressive Defense to Calls for Coronavirus Compensation”.

The NY Times says: “Beijing has adopted a ‘no-holds barred’ diplomatic push to quash criticism of its handling of the outbreak and to fend off efforts, including by President Trump, to hold it financially accountable.”

That followed an earlier report by the NY Times on April 24 which claimed that the Chinese government had “pressured” the European Union into “suppressing” a publication criticizing China over alleged disinformation.

Both the EU’s foreign affairs department and China denied the claims of “pressure” and “suppression”.

Peter Stano, spokesman for the EU’s foreign affairs chief Joseph Borrell, wrote a letter to the NY Times protesting the report, saying: “Let me be clear, the EU has not bowed to any alleged political pressure from outside.”

Here’s the thing: Stano heads up the European External Action Service (EEAS) which is a media unit dedicated to countering what it calls foreign disinformation. The EEAS has in the past published reports alleging Russian and Chinese state-backed propaganda campaigns infiltrating Western media.

Therefore, Stano and his media unit are certainly no friends of Moscow or Beijing. It if denies that Beijing was involved in coercing EU diplomats into suppressing a critical report, then it’s a fair assumption that the denial is accurately founded. That is, the NY Times and its sources are wrong.

What the NY Times was citing in particular was a report published by a media sub-unit of the EEAS, called EUvsDisinfo. The latter runs a disclaimer on its website that it does not represent the official views of the EU. Its views are thus up for vetting by more senior EU officials. If there was some kerfuffle and revision going on then it is a reflection of internal EU reviewing. Why bring China into the picture? The NY Times cites sources within disgruntled EUvsDisinfo staff as “claiming” Chinese interference in its publication process. This is getting into the realm of hearsay. There is no evidence to support the allegation of interference. All we know is that at the official level, the EU and China both rejected unsubstantiated claims of coercion and suppression.

We shouldn’t be surprised if EU executives pulled the plug on aspects of EUvsDisinfo’s so-called media monitoring. Like its parent media unit, EEAS, the EUvsDisinfo “reports” are more than anything exhibits of shoddy rumor curation. It collects examples of reports in Russian and Chinese media, and then deduces that Moscow or Beijing have sponsored these reports as part of state-backed disinformation campaigns.

If senior EU diplomats clipped the wings of the EEAS and its EUvsDisinfo unit, it is probably because their claims were deemed outlandish and unprofessional.

In the latest EUvsDisinfo “report” accusing Russia and China of “conspiracy narratives” it cites the following examples:

Media reports on RT and Sputnik that hand-washing is not effective in protecting against Covid-19;

A media report on RT that anti-malaria drug hydroxychloroquine may be an effective treatment;

A media report on RT that zinc could help kill the coronavirus.

In a world turned upside down by the Covid-19 pandemic, just because Russian and Chinese media report on unverified claims (a fraction of the total news cycle) this does not constitute evidence of Moscow or Beijing-backed disinformation. That kind of deduction by the EEAS and its media monitoring people is ludicrous. No wonder if some of its unhinged claims were spiked by EU chiefs concerned to not cause unnecessary offense in foreign relations.

Let’s put this in perspective: President Donald Trump and Fox News have been very publicly touting hydroxychoroquine as an alternative treatment for Covid-19 despite scientific warnings that the drug is ineffective and possibly injurious. So why isn’t the EU’s so-called media watchdog flagging up a Washington-sponsored disinformation campaign?

Surely the most outrageous case of disinformation was Trump’s absurd proposal for humans to inject with household bleach as a possible treatment for the disease.

But that is Western disinformation at its crudest, most ridiculous level.

Trump and Fox News’ other claims that China “covered up” the scale of the Covid-19 outbreak or let it “leak out” of a laboratory is taking the disinformation to a relatively more sinister level, albeit still derisory for lack of evidence.

The NY Times has not quite stooped to Trump’s stupid tactics of crudely framing China over the Covid-19 pandemic. Nevertheless, the newspaper has aligned with its hate-figure in the White House by pushing its own, seemingly more sophisticated disinformation to demonize China.

In that way, the NY Times is in effect working in a joint endeavor with the Trump White House to incriminate China and force it into forking out trillions of dollars in compensation. The difference between Trump’s bullshit and the Times’ bullshit is the pretentious adjective “quality”. The NY Times presumes to deliver “quality” information, but it is bullshit nonetheless.

On April 22, the NY Times ran a report claiming that “Chinese agents helped spread messages that sowed virus panic in the U.S.”. Citing anonymous “intelligence sources”, it was claimed that China had infiltrated mobile phone users in the U.S. with messages that the Trump administration was going to declare martial law under the guise of a pandemic lockdown.

As usual with such Western media reporting on alleged Chinese, or Russian, media agents, no evidence was forthcoming. Indeed, the NY Times chose to ignore that the same speculation about martial law had already been published in several U.S. media outlets, such as Newsweek, Bloomberg, The Hill and NBC which did not mention Chinese agents. The inference being it was homegrown U.S. activists.

Why the NY Times gave it the “Chinese agents” spin, and with no substantiation, suggests that it was engaging in a U.S. intelligence campaign to smear China. For good paranoid measure, the paper further speculated that the alleged Chinese operatives “had adopted some of the techniques mastered by Russia-backed trolls”. A ropey story is thus referencing another ropey story (“Russiagate”) as a way to prop up its credibility.

Hence, the so-called U.S. “newspaper of record” is no better than the vulgar occupant in the White House and his Fox News echo chamber which the “liberal” NY Times snootily deprecates as uncouth and “rightwing”.

Russia’s Foreign Minister Sergei Lavrov this week pointed out that EU claims of Russian and Chinese disinformation over the Covid-19 pandemic have been made with “zero evidence”. The same goes for equally dodgy accusations against China whether by the Trump wing or the more pretentiously sophisticated wing of American information warfare on the pages of the NY Times.

Such is the smoke and mirrors of the Western corporate media landscape that when China (or Russia) respond by slamming the absurd and reckless demonization campaigns, this is then cited as “evidence” of the aforementioned “cover-up”.