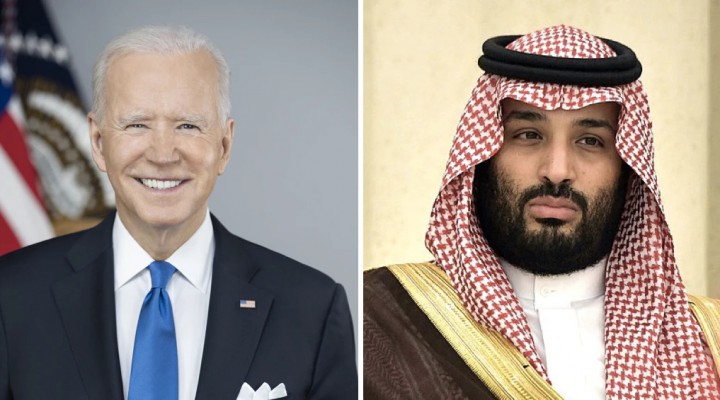 In a major walkback from his campaign pledge to make Saudi Arabia a “pariah” for human rights abuses like the assassination of Jamal Khashoggi, President Biden will reportedly visit Riyadh with the goal of persuading Crown Prince Mohammed bin Salman to help the US alliance win its economic war against Russia.

The Guardian tells us the trip “suggests Biden has prioritized his need to bring oil prices down and thereby punish Russia for its invasion of Ukraine, over his stand on human rights.”

So in order to punish Vladimir Putin for his war crimes and his assault on freedom and democracy, Biden will be courting a tyrannical war criminal whose country has no freedom or democracy.

I am not the first to note the risible irony of this development.

The EU literally just banned oil from Russia (mimicking the United States' actions) because they don't want to give money to a "dictator". So Biden is travelling soon to Saudi Arabia to try and bring energy prices down– which is a vibrant democracy, as you all know.

“The Biden Administration is openly planning to pay homage to one [of] its closest allies — one of the most despotic and murderous tyrants on the planet, the Saudi Crown Prince — at the same time it convinces Americans its motive for fighting wars is to defend freedom and democracy,” tweeted Glenn Greenwald.

“The EU literally just banned oil from Russia (mimicking the United States’ actions) because they don’t want to give money to a ‘dictator’. So Biden is travelling soon to Saudi Arabia to try and bring energy prices down– which is a vibrant democracy, as you all know,” tweeted Richard Medhurst.

“As part of mobilizing support for the great war for ‘freedom’ in Ukraine, Biden will be visiting the great beacon of ‘democracy,’ Saudi Arabia this month. What’s a little murder and dismemberment between friends?” tweeted Joseph Kishore.

Indeed, one wonders if perhaps Putin could settle this whole conflict by staging a few mass beheadings and dismembering a Washington Post reporter with a bone saw to get on America’s good side.

A lot of people talk about the “hypocrisy” of the US empire, as though being hypocritical is the issue. But the complete lack of moral consistency in US imperial behavior is noteworthy not merely because of hypocrisy: it’s noteworthy because it shows the US empire has no morality.

Despite the astonishing deluge of propaganda and brazen government disinformation we’re being blasted in the face with painting the war in Ukraine as a fight between good versus evil, freedom versus tyranny, democracy versus autocracy, the truth is much less flattering to the imperial ego. In reality, the US is waging a proxy war in Ukraine for the exact same reason it remains close with Saudi Arabia: because it advances its own interests to do so.

That’s it. That’s the whole entire story. The US doesn’t care about Ukrainian freedom or Ukrainian lives, it cares about strengthening its Eurasian geostrategic hegemony, and it would cheerfully incinerate every Ukrainian alive in order to accomplish that goal.

Grave mistake to go to Riyadh for this meeting. Not likely to get lasting gains while incurring risks and undermining values.https://t.co/dy5zZvlbjp

One only believes the US is undermining its values by partnering with Saudi Arabia if one assumes that US values include freedom, democracy, justice and peace. This is not an acceptable thing for a grown adult to believe in 2022. US values in the real world are domination and global power. That’s it.

Really if you think about it Saudi Arabia is just a more honest version of the United States. Its tyranny is right out in the open instead of being sneakily disguised under inverted totalitarianism. Its oligarchs and its official government are all the same people. It never tries to pretend its wars are “humanitarian” in nature. And when it wants to murder an inconvenient journalist it simply does so instead of dishonestly framing it as an espionage case.

In truth, when you look at its overall behavior on the world stage, the US is far more murderous and tyrannical than either Russia or Saudi Arabia . Pretending that Biden is lowering the United States beneath its values by visiting Saudi Arabia is highly flattering to the US. If anything, it’s the other way around.