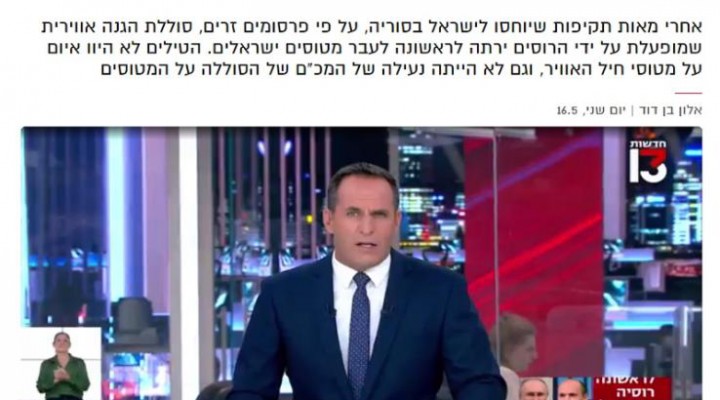 The Alt-Media Community and especially its West Asian members who sympathize with the Resistance’s anti-Zionist goals usually never believe anything coming from the Jewish State since they suspect that it’s always twisted to advance its own interests at others’ expense, yet many blindly believed Channel 13’s unverified report simply because it conformed to their wishful thinking expectations.

The Alt-Media Community (AMC) is ecstatic, practically orgasmic one can say without even a hint of exaggeration or sarcasm, following a report from Israel’s Channel 13 alleging that Syria finally used the S-300s that it obtained from Russia in late 2018 against the Zionist state’s attacking aircraft during their latest strike on the Arab Republic. It’s long been considered among the greatest scandals in recent years that Syria sat back and let Israel bomb it with impunity literally hundreds of times since without once using the S-300s that the AMC was convinced were going to put an immediate stop to those attacks.

Activists always explained this away by claiming that Russia would allow Syria to use them “next time”, though that time never came, hence why many shifted to spreading the “5D chess” conspiracy theory alleging that Russia letting Israel bomb Syria is just “part of the anti-Zionist plan” or even sharing fake news about it. For instance, some falsely claimed in early 2021 that Russia threatened to shoot down Israeli jets in international airspace, which it never actually said nor ever ended up happening. Even so, the AMC’s myth about the S-300s became larger than life and a crucial part of that community’s dogma.

The reality, as I meticulously explained in the 15 analyses that I’ve written over the years about this that are hyperlinked inside this piece here from February 2021, is that Russia “passively facilitates” Israel’s strikes against Hezbollah and their IRGC allies per the “deconfliction mechanism” that those two agreed to just days prior to the onset of Moscow’s anti-terrorist intervention in Syria in September 2015. The Kremlin indirectly uses Israel to balance Iran’s rise in Syria out of concern that the Islamic Republic will inevitably escalate tensions with the Jewish State to the point of war if it isn’t “contained” there.

This reality greatly upset the AMC’s anti-Zionist activists who couldn’t accept that Russia, the Great Power who they generally support due to its leading role in the global systemic transition to multipolarity, secretly struck a Machiavellian deal with that community’s hated Israeli foes against what they regard as their Resistance heroes (Hezbollah/Iran). Their seething anger was always kept just below the surface since they couldn’t for some reason bring themselves to publicly acknowledge it, perhaps out of fear that their fellow gatekeepers would viciously exile them from the community for doing so.

Those gatekeepers never tire of carrying out inquisitions against what they still insist is the so-called “Zionist infiltration” of the AMC, ridiculously claiming that anyone who draws attention to this earlier described Machiavellian reality between Russia and Israel is secretly a “Zionist”. All the while, they ignored the martyrdom of their Resistance heroes whose deaths they couldn’t fully acknowledge lest they add credence to the same reality that they so actively sought to suppress, thus exposing themselves as the most likely “Zionist infiltrators” but few ever put two and two together to realize it.

It’s against this years-long context of almost uncontrollably bubbling cognitive dissonance that Channel 13’s report went viral across the AMC and was therefore practically an orgasmic event for most, though it’s very likely that this outlet’s report is just as fake as most Russian-related ones coming out of the Zionist entity. The reason for this skepticism is that the Google Translated version of Channel 13’s report cites “foreign publications” as the source behind its claim that Syria finally fired the S-300s at the latest attacking Israeli jets. It also said that they didn’t pose any threat to their targets.

This makes the report itself unreliable, especially since one would imagine that the story would have first come from Russian media if Moscow truly had finally authorized this system’s use by Damascus that it had hitherto largely been suspected of denying thus far. After all, it would have set a new precedent that totally went against the “de-confliction mechanism” agreed to between President Putin and his close friend former Prime Minister Netanyahu had it occurred, so it follows that the Kremlin would have an interest in taking credit for this in order to own that game-changing decision.

Another point of suspicion is that this report emerged shortly after President Putin spoke to incumbent Prime Minister Bennett on Israeli Independence Day, during which time the Russian leader also clarified Foreign Minister Lavrov’s anti–fascist remarks from a few days prior that were regrettably misinterpreted by Tel Aviv as antisemitic. President Putin is a man of his word who doesn’t stab his allies in the back so it’s unthinkable that he’d suddenly authorize the Syrian Arab Army (SAA) to use the S-300s and thus ruin any chances of effectively managing their presently difficult ties that he just tried to save.

Not only that, but the report itself is actually very embarrassing for the Russian Armed Forces (RAF) since it claims that the allegedly fired S-300s didn’t pose any threat to the attacking Israeli jets. In other words, that system is being portrayed as a paper tiger that was never the game-changer that the AMC hyped it up to be, which is most likely an accurate assessment but the timing of this report seems intended to malign the overall capabilities of the RAF in Ukraine in coordination with the US-led Mainstream Media’s (MSM) claims since the start of the ongoing special military operation there.

With this ulterior motive in mind connected with the suspicious timing of Channel 13’s unverified report that unprofessionally cites “foreign publications” without naming them or even quoting an unnamed Israeli official to add credence to their shady claim, it appears as though this is an information warfare provocation by that country’s anti-Russian lobby. To elaborate, they likely realized that now would be the opportune time to insert their fake report into the popular discourse considering the recent Russian-Israeli scandal over Lavrov’s anti-fascist remarks that caused a lot of controversy in both countries.

The purpose of this provocation doesn’t seem to have been to directly shape either side’s policies towards the other since Russian and Israeli decisionmakers would know better than anyone in the public sphere that Channel 13’s report is most likely just fake news, but to manipulate popular perceptions of each other in their societies as well as the broader West Asian region. Russians and Israelis might view one another with such suspicion as a result and some of their representatives, whether in the media or in government, might thus make highly publicized and very provocative statements about the other.

That could in turn create a self-sustaining cycle of suspicion that could be exploited by self-interested forces within Israel and the US to continue manipulating perceptions of Russians and Israelis in one another’s societies, all for the purpose of applying more pressure on Tel Aviv to comply with Washington’s sanctions against Moscow, not to mention dispatching weaponry to Kiev. That outcome could completely dismantle the “Rusrael” project that President Putin and his close friend Netanyahu worked so closely on for years to create in pursuit of their shared vision of managing West Asian affairs.

While recent events have indisputably reduced the grand strategic viability of that project in the near term, particularly Israel’s votes against Russia at the UN and the latest spat over Lavrov’s anti-fascist remarks, “Rusrael” isn’t yet abandoned though some anti-Russian/pro-US lobbyists within Israel want that to happen no matter what. To that end, they’re likely the ones behind Channel 13’s report that one can objectively conclude is probably fake news for the reasons that were earlier explained and for the purpose that was just stated.

What makes this infowar provocation so curious though is how eagerly many in the AMC, including those in West Asia and especially the ones that openly sympathize with the Resistance’s anti-Zionist goals, gave credence to this report from none other than their Israeli nemeses. They’d usually never believe anything coming from the Jewish State since they suspect that it’s always twisted to advance its own interests at others’ expense, yet many blindly believed Channel 13’s unverified report simply because it conformed to their wishful thinking expectations.

This observation speaks to one of most systemic problems of the AMC, and it’s that wishful thinking predominates to the point where its members – and especially gatekeepers – will extend credence to whatever advances their “politically correct” narrative, even if it comes from that which they literally consider to be an enemy who they hitherto claimed could never be trusted no matter what. Until/Unless Russian media cites their own credible sources for this story and doesn’t just casually report on this likely fake report for clickbait purposes, then everyone should consider it to be an infowar provocation.

On a closing note, it shouldn’t be forgotten that the point isn’t to directly manipulate Russian-Israeli relations, but to manipulate their societies’ perceptions of the other in the hopes of putting artificially manufactured bottom-up pressure on Tel Aviv to unilaterally worsen its ties with Moscow to Washington’s benefit. The manipulation of other perceptions, including the AMC’s, are a byproduct of this provocation but not its primary goal, though the second-mentioned is intriguing to pay attention to since it shows how desperate that community is to believe that Russia finally let Syria use the S-300s.