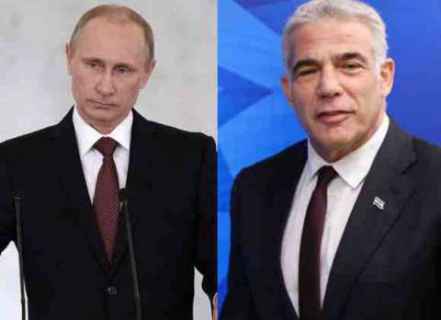 Now that Israel has shown its hand, will Russia finally stop indulging its attacks on Syria?

I hope Vladimir Putin was listening when Israeli Foreign Minister Yair Lapid went on TV to say that Israel would side with the US in any war between Russia and Ukraine and always remain in step with its strategic American allies. The Russian president has hitherto been one of this racist occupying state’s biggest defenders, turning a total blind eye to its repeated aggressive attacks on Syria, annexation of Palestinian territory, scuppering of the two-state solution, slaughter of Palestinian innocents, and tightening of the starvation-siege on two million people in the Gaza Strip — the majority of whom are pro-Russian.

Most Arabs — except for the US client rulers who have been normalizing relations with the occupation state — consider Russia a strategic ally. They support its alliance with China aimed at ending the global hegemony of the US which stands behind all the wars that threaten them and devastate their countries.

Russia treated Israel as friend that could be relied on in difficult times. That is why it allowed it to carry out more than 300 air and missile raids on Syria in the past five years, including recently the port of Latakia just 50km from the Russian airbase at Hmeimim.

Russia always used to cite the one million Israelis of Russian origin who emigrated in recent years to usurped Palestinian territory as a pretext for indulging Israel and turning a blind eye to its attacks on military and civilian targets Syria that have killed and maimed hundreds of people, mostly civilians. The position taken by the Israeli foreign minister — and future prime minister — demonstrates the failure and naivety of this stance. It calls for a rethink of the whole gamut of accommodating Russian policies towards this supposed friend that turned its back on Moscow and blatantly took its adversary’s side at a highly delicate moment.

Russia and Putin should turn the card of the one million Russian Israelis — most of whom are not Jewish or recognized as Jewish — against this racist state which flaunts its hostility to their motherland and support for its enemies.

When RT’s Arabic service hosted a Russian colonel to explain why Russia doesn’t respond to Israeli attacks on Syria, or allow the Syrian army to use its S-300 missiles to repel them, he replied: “We are not in a state of hostility with Israel. We didn’t go to Syria to fight it, but to fight the terrorists.”

This expert, or his government’s spokesperson, should now tell us whether they think Lapid’s remarks do not amount to an admission of Israel’s subservience to the US, or that declaring Israel will stand with Russia’s enemies in any war does not amount to hostility.

We hope the answer will not be too long coming.

0 thoughts on “Putin and Israel”