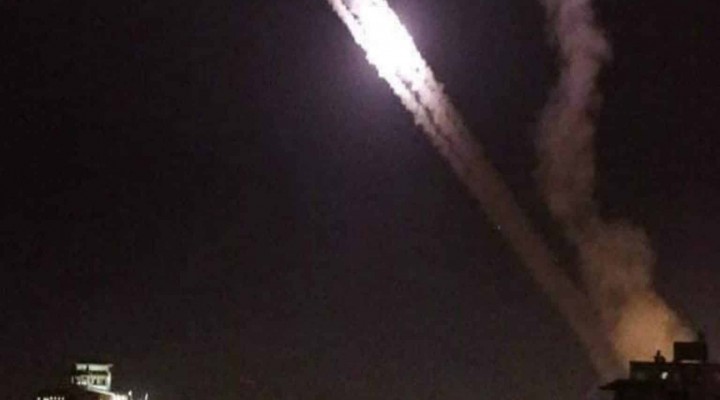 A Russian MiG-31K carrying a Kinzhal ballistic missile, one of Russia’s advanced nuclear-capable hypersonic weapons, was spotted landing at the Kaliningrad Chkalovsk airbase

VT: Last night VT personnel in Damascus were awakened as Israeli aircraft dropped bombs on Damascus.  All hits were in residential areas, targeting infrastructure.  The story below is on limited release by the Russian command, one citing an Israeli attempt to hit Russian forces inside Syria.

Doctor Najm, VT editor and former Minister of Justice for Syria, had Israeli bombs damage the apartment complex he lives in.

Israel stepped very much over a Russian red line, hoping that current talks over Ukraine have taken Russia’s “eye off the ball.”  Israeli operatives within Syria, and there are many Israeli terror cells, working hand in hand with ISIS and al Qaeda, operating across Syria, especially in the Daraa region south of Damascus, are, according to sources, planning a wave of terror across the country, coordinated with Turkey.

Sources tell VT that there is solid intelligence on a new Israeli biological warfare facility near the nuclear weapons plant at Dimona.  This is a big deal as Hezbollah will set this as a “hit first” location.

The claim made…and this is unsubstantiated…is that Israel is investigating COVID variants there.  This claim was made by one person with access to employees at the facility.

Other Retaliation by Russia

Last night, Russia turned on air defense/communications jamming equipment not only covering Syria but Lebanon, all of Israel and much of the Eastern Mediterranean as well.

Four Israeli fighter jets were preparing to attack the Russian military – they were driven off by two Su-35S.

Nevertheless, Russia took tough measures and, against the background of the preparation of Israeli strikes, which were to take place immediately after midnight, took to the skies two Su-35S fighters, which intercepted Israeli aircraft, preparing to immediately attack them in the event of the slightest threat.

Data on this subject are provided by both Syrian military sources and Russian news agencies, however, according to the Russian Spring publication, the attack was supposed to begin simultaneously on Damascus and Latakia.

“Last night, rocket attacks were carried out on the outskirts of the Syrian capital, causing some material damage to civilian and military infrastructure. One soldier was killed and five were injured. Initially, Israel planned to deliver two strikes at the same time – one on the outskirts of Damascus, the other on Latakia, but when they saw a pair of Su-35s raised on alarm, the IDF fighters went back without attacking Latakia., – said in the message of the publication “Russian Spring”.

According to Sentry Syria, before the Israeli Air Force strikes on Damascus and its environs, Russian planes did take to the skies from the Khmeimim airbase, however, at the moment there is no real information about either their number or their type.

The Center for the Reconciliation of Warring Parties in Syria has not yet made any statements on this matter, however, the Israeli attack was repelled, although one Syrian soldier was killed. (End of Avia Pro Report)

A Russian MiG-31K carrying a Kinzhal ballistic missile, one of Russia’s advanced nuclear-capable hypersonic weapons, was spotted landing at the Kaliningrad Chkalovsk airbase on February 7.

From there, the Kinzhal can reach London, Paris, Rome, and most other NATO-member capitols in Europe within a matter of minutes.

Experts believe this to be a very serious new development because MiG-31s, especially Kinzhal carriers, had not previously been based in KaliningradПодробнее на: