HOME / WORLD / Biden & Yemen: Will He Do The Right Thing Even For The Wrong Reasons? 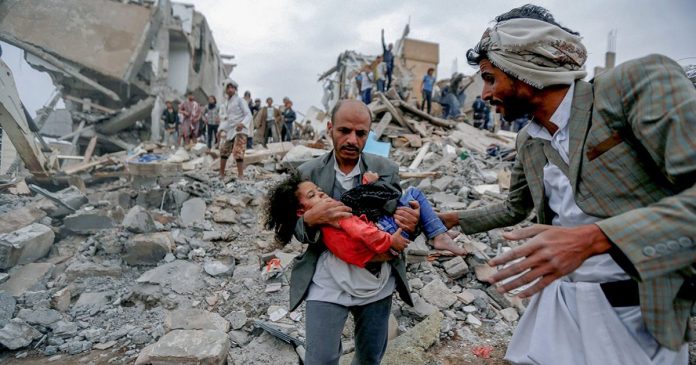 Pro-Yemeni activists hope that Biden will stay true to his prior promise to stop funding the GCC’s War on Yemen, but even if he does what’s arguably the morally right thing, he’ll probably be doing it for geopolitical reasons even if he tries to pass it off as a matter of principle for soft power sake.

It would arguably be the morally right thing for the US to stop funding the GCC’s War on Yemen like Biden previously promised that he’d do if he succeeds in “winning” (read: stealing) the presidency, but he’d be doing it for the wrong reasons in the event that it ever comes to pass. Pro-Yemeni activists might hope that he’ll be “principled”, but any such public claims by his potential administration would simply be for soft power sake. Biden doesn’t care about stopping what the UN described as the world’s largest humanitarian crisis, but his Obama-era “deep state” handlers are very interested in reattempting their risky rapprochement with Iran at Saudi Arabia’s expense. That’s why there’s a lot of talk about the Democrat candidate possibly returning to the US to the Iranian nuclear deal in order to take another shot at slowly subverting Iran from within through the long-term economic and social strategy that Trump replaced with his much quicker and more brutally effective policy of so-called “maximum pressure”.

Cutting off funding for the GCC’s War on Yemen could naturally occur in parallel with returning to the Iranian nuclear deal. It would deal a double blow to the Gulf Kingdoms, be misinterpreted by Iran as an act of “goodwill”, and provoke the GCC into at the very least rhetorically responding against the US in a way which could catalyze a self-sustaining cycle of distrust-driven “decoupling” between them exactly as the Democrats might be planning. That is, after all, similar in essence to what the Obama Administration cautiously flirted with doing back in 2015 when it first agreed to the nuclear deal. Although it continued to provide “Lead From Behind” assistance for the GCC-led War on Yemen, it opted against playing a front and center role like it could have theoretically done as a so-called “show of force” had the political will been present. The Trump Administration, to its credit, always declined to play such a role either, though it served GCC interests by pulling out of the nuclear deal and imposing the policy of so-called “maximum pressure”.

In the scenario that a “Biden” Administration (with “Biden” purposely being included in quotation marks since he’s really just a pro-Democrat “deep state” puppet) stops funding that conflict, Saudi Arabia might be pressed to publicly normalize its not-so-secret relations with “Israel” in an attempt to replace lost American aid (if it doesn’t already do so before that time). The Wahhabi Kingdom might also double down on its military outreaches to Russia and China too, the first of which signed a massive arms deal with it during Saudi King Salman’s historic trip to Moscow in October 2017 and the second of which allows Riyadh to build its Wing Loon drones inside the country. Both Russia’s and China’s armaments are presumably being used in Yemen, and they’d likely explore the possibility of emergency military shipments if the US decides to stop providing its wares to Saudi Arabia in order to pressure it to pull out of that war. Even if Riyadh retreats, it wouldn’t be able to “save face”, and hence it might reach out to the US’ two rivals more eagerly as revenge.

In other words, any possible success that the US stores in pressuring the GCC to stop its War on Yemen could set into motion a larger chain reaction intended to once again revolutionize Mideast geopolitics after America lost control of this process over the past couple of years. It shouldn’t be seen as a “principled” move, but as a cold, hard, geostrategic calculation meant to decisively change the state of affairs in ways which Washington might hope to exploit. For instance, closer military ties between Saudi Arabia on one hand and Russia and China on the other might be met with suspicion those latter two’s close Iranian partner, which might in turn feel pressured to accelerate its incipient economically driven rapprochement with the US under those circumstances. A “Great Geopolitical Reset” might ultimately play out whereby the US and its rivals swap their traditional partners, with America getting closer to Iran while Russia and China take Saudi Arabia and “Israel” more under their “multipolar” wings.

To be absolutely clear, though, the author would personally welcome anything which results in the GCC stopping its War on Yemen even if such moves are undertaken for purely geopolitical reasons. That conflict has destroyed an entire nation and ruined every generation of people living there. Yemen probably won’t recover for decades, at the very least, even under the most optimistic scenario since the situation there is ominously similar to Afghanistan in many respects and could very well end up with the same dysfunctional outcome. In any case, it would be up to the Yemeni people to decide the best way to proceed once the kinetic phase of their externally driven war finally ends, including whether to reform their federal system to accommodate for the recent surge of South Yemeni nationalism or even possibly allow that half of the country to secede. It’ll therefore be interesting to see what might happen on this front if Biden successfully seizes power and fulfills his promise to stop the War on Yemen.

0 thoughts on “Biden & Yemen: Will He Do The Right Thing Even For The Wrong Reasons?”