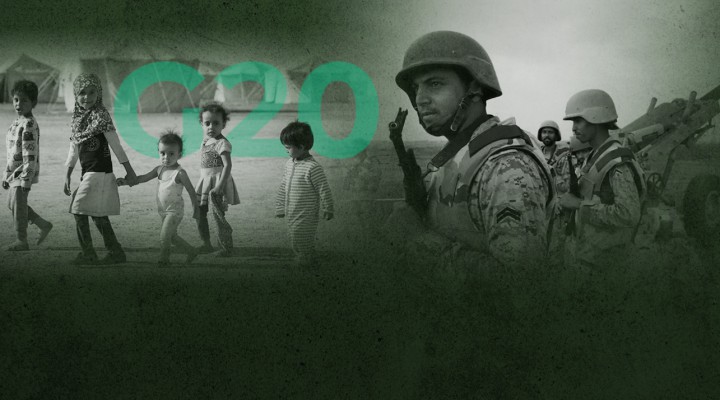 New figures from the UN and the Stockholm International Peace Research Institute show that since the war in Yemen began, the US has sold over $13 billion in high-tech weapons to Saudi Arabia, making the Kingdom a cash cow for US weapons makers.

MPN- Despite presenting itself as a force for good and peace in the Middle East, the United States sells at least five times as much weaponry to Saudi Arabia than aid it donates to Yemen. The State Department constantly portrays itself as a humanitarian superpower with the welfare of the Yemeni people as its highest priority, yet figures released from the United Nations and the Stockholm International Peace Research Institute (SIPRI) show that since the war in Yemen began, the U.S. government has given $2.56 billion in aid to the country, but sold over $13 billion in high-tech weapons to Saudi Arabia, the leader of the coalition prosecuting a relentless onslaught against the country.

Figures like these are always debatable. What constitutes legitimate “aid” is a question everyone would answer differently. Furthermore, the $13 billion figure does not include the enormous weapons deal Saudi Arabia signed with Donald Trump in 2017, which will reportedly see the Kingdom purchase $350 billion over ten years.

SIPRI is skeptical of the size of these numbers, but if they prove to be correct, once the orders begin arriving, they will make the paltry aid donations seem like small change by comparison. Sales include all manner of military equipment, from radar and transport systems to F-15 fighter jets, TOW missiles, Abrams tanks, and Paladin howitzers.

While the Saudis pay in petrodollars, Yemenis pay in blood. Four years ago, the Saudi Air Force bombed a well-attended funeral in Yemen’s capital, Sanaa. It was a bright, clear day. The Saudis used a “double tap” airstrike to ensure maximum carnage. 240 people were killed, and like with the 2018 Saudi attack on a school bus that killed 40 children, the bombs that did the damage were 500-pound (227 kilogram) MK 82’s, built and supplied by Lockheed Martin, America’s largest weapons contractor.

“Making billions from arms exports which fuel the conflict while providing a small fraction of that in aid to Yemen is both immoral and incoherent. The world’s wealthiest nations cannot continue to put profits above the Yemeni people,” said Muhsin Siddiquey, Oxfam’s Yemen Country Director.

Four Years Ago, US Bombs Killed Hundreds at a Yemeni Funeral. Those Bombs Are Still Used Today

Already the region’s poorest nation, Yemen has been utterly devastated by the six-year conflict. The United Nations estimates that 14 million people — over half the country’s population — are at risk of famine, and 20.5 million need help accessing drinkable water. 80% of the population, it calculates, needs some form of humanitarian assistance. The Saudi-led coalition, which includes the UAE, Qatar, and Bahrain, has deliberately attacked soft targets like hospitals and water facilities, carrying out the equivalent of one strike against such buildings every ten days since the fighting began.

“The fact that the United Nations, faced with such enormous human, environmental and migration devastation around the world, has said for several years now that Yemen is the worst humanitarian crisis in the world, that says it all. This war has devastated what was already the poorest country in the Arab world. Not only the direct bombing — of funerals, of weddings — but the blockading and bombing of the ports. Yemen is a country very dependent on imported food, basic medicines, everything. So when the ports are closed down, people move close to starvation very quickly,” Phyllis Bennis, Director of the New Internationalism Project at the Institute for Policy Studies and an expert on the Middle East, told MintPress. 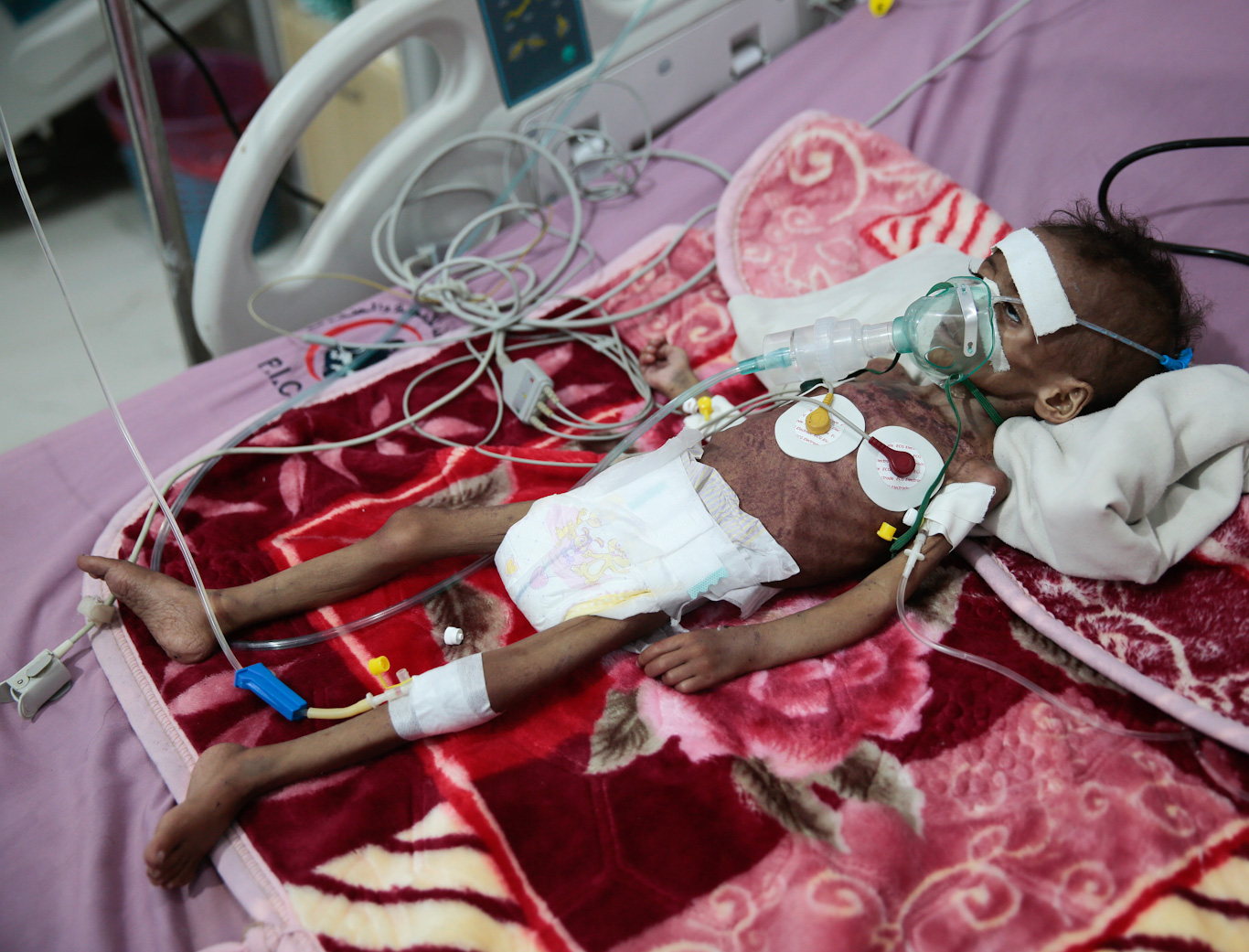 In addition to supplying the weapons, the U.S. (and many of its European allies) train Saudi forces, have provided critical military infrastructure and logistical support, and even refueled Saudi bombers in the air and provided targeting guidance to help Saudi forces find their marks more efficiently. On top of that, the U.S. has shielded Riyadh from international censure by defending it at bodies like the United Nations. In essence, the U.S. is involved in every area of the Yemen conflict, doing everything up to pulling the trigger itself.

“The U.S. must end its support for Saudi Arabia and the United Arab Emirates and instead prioritize the people across Yemen fighting to survive,” Scott Paul, Oxfam America’s Humanitarian Policy Lead told MintPress in a statement.

The U.S. has paused much of its aid to the most vulnerable Yemenis, while it continues to provide weapons that fuel the deadly conflict. Congress and the American people have made it clear that they do not want any part in this. We continue to call for the U.S., the international community and all parties to the conflict to push for peace, and we will hold the incoming Biden administration to its pledge to do its part.”

in hours, all U.S. aid (a $70 million program) to the country was stopped. 800,000 Yemeni workers were expelled from Saudi Arabia, and the country had difficulties securing loans with international financial institutions. Thus, as Bennis said, “The U.S. refusal to take Yemen and Yemenis seriously goes back a very long way.”

Saudi Arabia has proven to be one of the United States’ most loyal allies in the region over the past 50 years — and its enforcer. In return for keeping the oil money flowing into the United States, Washington has been willing to defend the country’s abysmal human rights record, and even to overlook the assassination of journalists like the Washington Post’s Jamal Khashoggi. Andrew Feinstein, an arms industry expert and author of “The Shadow World: Inside the Global Arms Trade,” explained to MintPress that,

The U.S. has allied itself with Saudi Arabia, despite it being one of the world’s most corrupt countries and worst human rights abusers, at home and abroad, for two primary reasons: oil and the U.S. right’s desire for regime change in Iran. This is despite the reality that Saudi is the primary ideological supporter of, financier and, weaponizer of the most extreme Islamist groups.” Under Trump, the United States has sharply increased its military support to Saudi Arabia, signing a number of weapons deals that put the lie to any idea that he was an anti-war president. Overall, SIPRI calculates that the U.S. accounted for 36% of global weapons sales between 2015 and 2019, a large increase over the previous five years. Saudi Arabia is by far America’s best customer, and America is the Kingdom’s most important supplier, accounting for three-quarters of all purchases. In 2019, this included 59,000 guided bombs, most of which were destined to be dropped on soft targets in Yemen. As Bennis noted, “The Saudis buy more arms from the U.S. than any other country in the world, so it is embedded in the very fabric of the military industrial complex here.” Furthermore, many of Washington’s other best customers are also Middle Eastern dictatorships also bombing Yemen.

Saudi Arabia will be hosting the G20 summit this weekend, a meeting of the 20 most powerful nations in the world. Remarkably, for a country where women cannot travel or get married without permission from a man, the Saudi government has chosen “female empowerment” as the theme of this year’s meeting. And while the G20 is being urged to hold Saudi Arabia accountable for its role in Yemen, that possibility seems doubtful, seeing as G20 arms exports to Riyadh are three times what they give to Yemen in aid.

Biden Signals a Desire To End the Yemen War. Here’s Why Yemenis Aren’t Buying It

With an impending change of administration in the White House, there is some talk that a Biden administration will reverse direction on Yemen. Bennis, however, was skeptical of how profound a change Biden will implement:

There may be a rather abrupt change. The question, for me, is how deep it will be. Biden has made a commitment on his statement of intention on foreign affairs to end U.S. involvement in the Saudi War on Yemen. How that gets defined is the question. There will be some symbolic moves very quickly after he is inaugurated, hopefully in the first days or weeks of the new administration. The big question is will he actually stop the massive arms sales of basics- the F-15s and F-16s, the bombers and bombs, the drones, the ammunition and equipment that is responsible for so much death and destruction in Yemen. Is he prepared to do that? I’m hopeful but not terribly optimistic.”

This is the view echoed by Yemenis on the ground who spoke to MintPress. Ibrahim Abdulkareem, who lost his infant child when a Saudi warplane dropped a U.S.-made bomb on his home in Sanaa in 2015, said that Biden’s statement of intention on foreign affairs was not good enough: ”I am not optimistic that Biden will stop supplying [Saudi leader Mohammed] Bin Salman with bombs like the ones that killed my daughter,” he stated. In international affairs, money talks. And the U.S. is making a lot of it from this war.